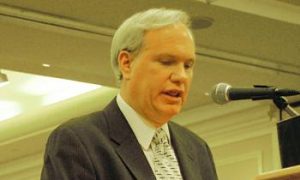 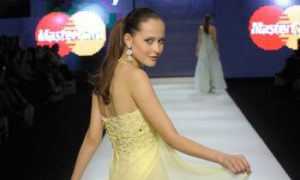 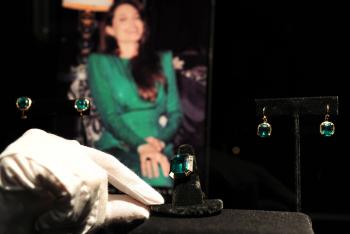 A Robert Procop ring, part of the 'Style of Jolie Exhibition' is seen in Beverly Hills on April 6, 2011. Angelina Jolie wore this ring at the 68th Annual Golden Globe Awards in January 2011. (Gabriel Bouys/Getty Images )
Entertainment

By Sunataya Yao
Print
American actress and humanitarian advocate Angelina Jolie, together with designer Robert Procop, has just launched a jewelry line called Style of Jolie, in Hollywood, according to eOnline.com.

The collection is on display at Juliens Gallery and Auction House in Beverly Hills, Calif. Darren Julien, CEO, and Martin Nolan, Executive Director of the gallery said they are very proud and excited to be associated with the charity venture.

The items are for sale and displayed in high-end, museum quality exhibition style for invited guests only. The line is made of yellow and rose golds with gems as a centerpiece. The collection has been very well received from visitors and the designer hopes to facilitate everyone who is interested in experience the line.

Procop mentioned on his website that each piece in the range is unique and of high quality. The pair have been in plenty of charity work for children with proceeds from this collection to benefit children in need of education.

“What we’re showing here is a collection that Angelina and I have been working on for the last nine months,” Procop said in the VDO clip on the gallery’s website.

“This is a collaboration between Angelina Jolie and myself in designing beautiful jewels as a piece of an art form,” said the artist, “… our main mission is helping children in crisis by educating children around the world."

According to Procop’s website, he is a jewelry designer famous for his exclusive custom work among Hollywood A-listers and royalty around the world.

Procop has shops in Beverly Hills, Geneva, and Hong Kong. He has been an active supporter of charities for underprivileged children, including those impacted by domestic violence, and Angelina Jolie’s global charitable efforts to help children in conflict.

Angelina Jolie first became interested in worldwide humanitarian issues while filming Tomb Raider in Cambodia in 2001. She turned to the United Nations High Commissioner for Refugees (UNHCR) for more information and has since become involved in promoting humanitarian causes.

She became a Goodwill Ambassador for the organization in 2001, and has received wide recognition for her efforts. In 2003, she was the first recipient of the newly created Citizen of the World Award by the United Nations Correspondents Association. In 2005, she was awarded the Global Humanitarian Award by the UNA-USA.

Jolie is also known as one of the world’s most attractive women, with a successful acting career, and has received an Academy Award, two Screen Actors Guild Awards, and three Golden Globe Awards. Jolie is married to Brad Pitt with six children.