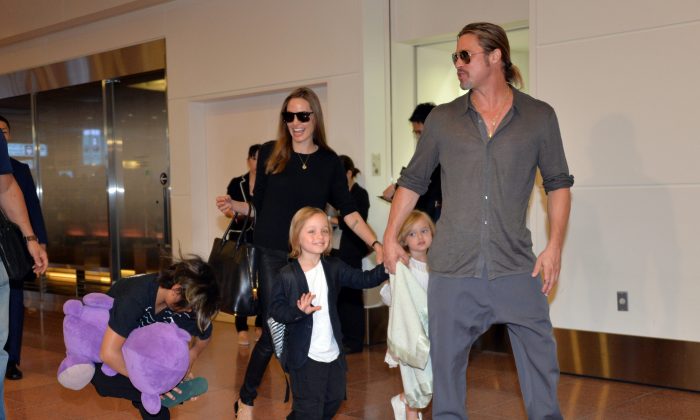 US film stars Brad Pitt (R) and Angelina Jolie (C), accompanied by some of their children, arrive at Haneda International Airport in Tokyo on July 28, 2013. Jolie and Pitt agreed to a temporary custody agreement involving their six children on Sept. 30. (AFP/Getty Images)
Entertainment

Angelina Jolie and Brad Pitt have come to a temporary custody agreement involving their six children, according to reports on Friday.

Pitt’s visitation rights come with stipulations, as it was ruled that a therapist will accompany the actor during his visit with his children, until he is deemed fit to parent unmonitored, according to the report.

Pitt will also be subjected to random drug and alcohol testing. It was reported that Pitt voluntarily submitted to a drug test following an alleged child abuse allegation investigation. An intoxicated Pitt allegedly physically and verbally attacked his son on a private jet while returning to Los Angeles on Sept. 14. Reports suggested that Pitt’s blowup is what led to Jolie filing for divorce a few days later.

TMZ also reported that the couple will attend counseling sessions individually and together as a family with their children.

The terms were mediated by the Los Angeles County Department of Children and Family Services (DCFS) and was readily accepted by Jolie, who said she wants to “heal” her family. The agreement will last for three weeks, and it is then the DCFS will impose new rules or turn over the case to the court, reported the entertainment website.

Jolie filed for the dissolution of her marriage to Pitt on Sept. 20, on the grounds of irreconcilable differences. The couple was married for 2 years, but dated exclusively for nearly a decade. Following the announcement of the split, Jolie Pitt’s attorney released a statement asking for privacy.

“This decision was made for the health of the family. She will not be commenting at this time and asks that the family be given their privacy during this difficult time,” Jolie’s attorney, Robert Offer, said in a statement to People magazine.

Pitt echoed similar statements, stating although he is saddened by the breakup: “What matters most now is the well-being of our kids. I kindly ask the press to give them the space they deserve during this challenging time.”