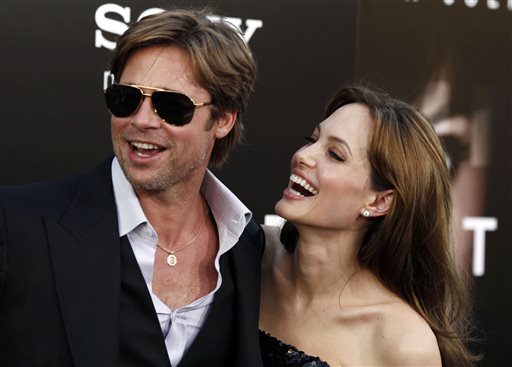 In this Monday, July 19, 2010, file photo, cast member Angelina Jolie, right and Brad Pitt arrive at the premiere of "Salt" in Los Angeles. Jolie and Pitt were married Saturday, Aug. 23, 2014, in France, according to a spokesman for the couple. (AP Photo/Matt Sayles, File)
Entertainment

NEW YORK—Brangelina is no more. Angelina Jolie Pitt has filed for divorce from Brad Pitt, bringing an end to one of the world’s most star-studded, tabloid headline-generating romances.

An attorney for Jolie Pitt, Robert Offer, said Tuesday in a statement that she has filed for the dissolution of the marriage. Offer said the decision to divorce was made “for the health of the family.”

Offer refused to answer questions about the divorce.

The couple has six children together: Maddox, Pax, Zahara, Shiloh, and twins Knox and Vivienne.

Divorce Rate Surges in Shanghai as Couples Rush for Houses

Though together for 12 years, Pitt and Jolie Pitt only wed in August 2014. They married privately in the French hamlet of Correns in Provence with their children serving as ring bearers and throwing flower petals. They announced the ceremony days later.

This is the second marriage for Pitt, who previously wed Jennifer Aniston. It’s the third for Jolie Pitt, who was previously married to Billy Bob Thornton and Jonny Lee Miller.

Though their initial romance—begun after the pair starred together in 2005’s “Mr. and Mrs. Smith”—sparked an avalanche of tabloid interest, Jolie Pitt and Pitt settled into their own unique kind of globe-trotting domesticity.

The pair adopted children from Cambodia, Vietnam and Ethiopia. And they sought to direct the glare of their celebrity toward other causes. Jolie Pitt, a goodwill ambassador for the United Nations, became an outspoken voice for refugees and various causes in Africa, as well as for breast cancer treatment after undergoing a double mastectomy.

Jolie Pitt also launched herself as a film director. Last year, the couple starred together in her “By the Sea,” playing a glamorous couple vacationing together in France while their marriage was on the rocks. It made a mere $538,000 at the box office.

In a 2014 interview with The Associated Press, Jolie Pitt said playing a couple with marital problems was cathartic.

“It almost makes you get past those issues because you can laugh at them,” Jolie Pitt said. “You do a film about bad marriage and you witness that behavior. You study it, you let it out, you attack each other and then you just want to hold each other and make sure you never behave that way.”

John Krasinski’s Love Letter to Family and Movies he Adores