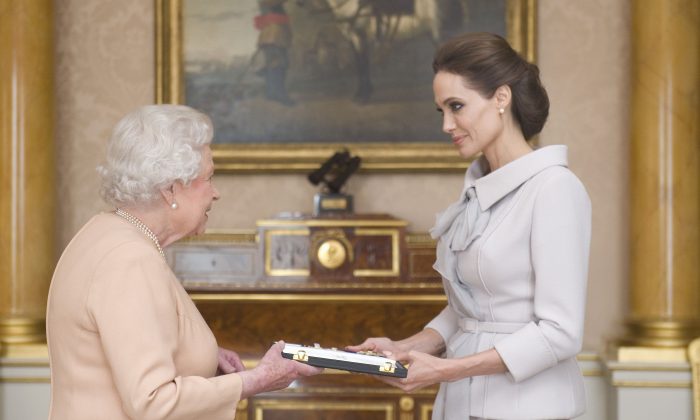 A rumored fight between Angelina Jolie and Amal Alamuddin may be over politics.

The fight allegedly took place in London over dinner, with Jolie storming out of the meal and then trying to forbid her husband Brad Pitt from talking anymore to Alamuddin’s husband George Clooney.

Gossip Cop later said that the story is “100 percent fiction,” citing a representative of Clooney.

The rep claimed that Jolie and Alamuddin have never met.

But other reports say that the fight did happen, and there have been other related rumors after Jolie and Pitt missed Clooney and Alamuddin’s wedding.

Celeb Dirty Laundry came in this week saying that it’s hard to believe Jolie is jealous of Alamuddin’s success considering Jolie is not the jealous type and she has, in many ways, accomplished more than Alamuddin.

But, it says that the feud–if there is one–could stem from a differing view on politics.

“Some of Amal’s clients have been incredibly controversial, and not necessarily the most popular people on planet Earth,” it said.

“People of this stature have very strong political opinions, and Angelina might have just disagreed with some of Amal’s more overt political sentiments – or heck, maybe she just didn’t like some of the people that Amal repped.”

The report is unverified and doesn’t even cite any sources.

Jolie, Alamuddin, Clooney, and Pitt have not commented on the rumors.