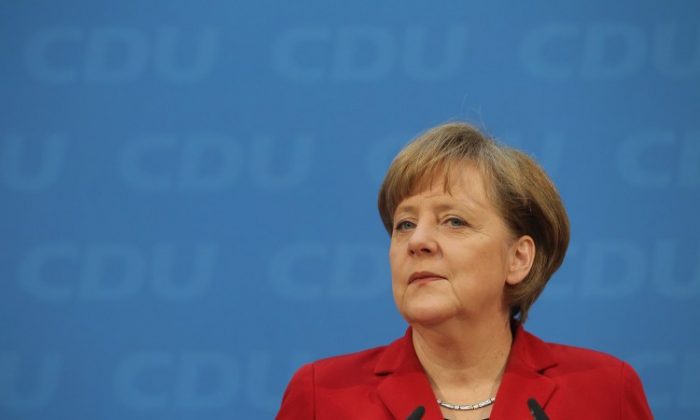 German Chancellor and leader of the CDU Angela Merkel speaks to the media the day after elections in Baden-Wuerttemberg and Rhineland-Palatinate on March 28, 2011 in Berlin, Germany. (Sean Gallup/Getty Images)
Europe

According to the latest poll carried out by Bild am Sonntag newspaper, 63 percent of Germans believe that Angela Merkel will be re-elected as German chancellor in the 2013 parliamentary elections.

The poll comes after Friday’s announcement by Germany’s main opposition party to nominate Peer Steinbrück as its candidate to run against Merkel.

Merkel has gained popularity among Germans for her handling of the economic crisis and the euro. Most Germans support her politics of playing a strong, active figure in the euro crisis by not embracing EU-wide fiscal union and advocating strict austerity measures on the indebted member states.

Steinbrück, on the other hand, comes from the Social Democratic Party (SPD), which has similar political views as French President François Hollande—that is, to create even closer integration between eurozone members, to have a common EU debt insurance, and to have a closer fiscal union. He is less popular among most people mainly because Germans do not want to see their tax money go to support indebted eurozone members.

Steinbrück, who is 65 years old, served as German finance minister in Merkel’s Cabinet from 2005 to 2009. He has a reputation of being a safe pair of hands because of his ability to steer Germany’s finances out of suffering major losses during the economic crisis.

Merkel, who is 58 years old, will run in next year’s election representing her Christian Democratic Union (CDU).

Unlike American elections that vote for the president directly, German elections are between parties for parliamentary seats on the basis of proportional representation.

Generally, the two largest parties, the SPD and the CDU, set the tone for their campaigns according to their pick of who will lead the government if they win a legislative majority.

In Germany, the two traditional parties each pair up with one other party to form a coalition government, hoping to win the most votes together.

Merkel’s CDU is currently paired up with the Free Democratic Party (FDP), whose popularity has greatly fallen in the last few years. It is likely that the CDU will look for another party with which to form a new coalition.

Steinbrück’s SPD is currently paired up with the Green Party, and it looks like they will continue their coalition to battle Merkel’s CDU and FDP bloc.

Steinbrück is known for his sharp tongue. He often publicly criticizes Merkel, questioning her ability to lead the state.

“We want to oust this government [CDU]. We want to make sure it isn’t just partially replaced but completely replaced with an SPD-Greens government,” said Steinbrück in a press conference, addressing the Green Party, which is currently ranked third in opinion polls.

Regarding Greece, which will be the key focus of many Germans during the elections, Steinbrück is of the strong opinion: “[Merkel] should finally tell us the truth. … Greece will not be able to borrow any more money on the capital market for the next eight years—this is the amount of time that Germany should be helping it. … To anybody who proposes to throw out Greece from the eurozone, we should answer: ‘You don’t know what you are talking about! The political and economic repercussions will be devastating,'” he said at the press conference.

Steinbrück is known for his bald statements, even once referring to Swiss politicians as “Indians” fleeing the cavalry during a row about tax havens. Current German Finance Minister Wolfgang Schäuble remarked that Steinbrück must “learn some manners” after his reckless and offensive speeches in Parliament last year.