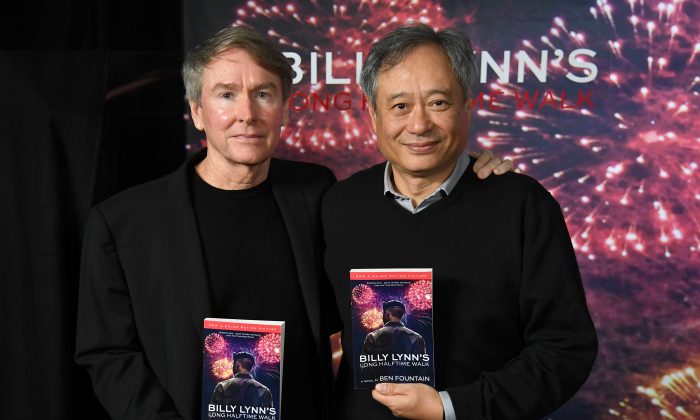 The first studio film shot entirely in 120 frames-per-second (FPS) opens Thursday, November 10, at the ArcLight Cinerama Dome in Hollywood for one week only.

“Billy Lynn’s Long Halftime Walk” by director Ang Lee (“Life of Pi,” “Crouching Tiger Hidden Dragon”) has a limited release of only two theaters in the United States, one in Los Angeles and one at AMC Lincoln Square in New York City, and only three other locations in the world: Taipei, Beijing, and Shanghai.

A Q&A with Ang Lee will take place Friday evening at the ArcLight.

Most films are shot in 24 FPS, a standard that has lasted for 90 years. A few features have been shot at 48 FPS, such as Peter Jackson’s The Hobbit film series.

But Ang Lee apparently planned to set a new record. He also shot the entire movie with two digital cameras, creating an original 3D film with 4K resolution, along with the 120 FPS. It’s a new, data-heavy, complex way to shoot a movie, which Lee humorously started calling “the whole shebang.”

This format also creates 2.2 billion pixels per second on screen, versus 53 million pixels for a regular 2K movie in 2D.

“No other system in the world has this capability,” said Susie Beiersdorf, vice president of sales at Christie Digital, inside ArcLight on Wednesday.

When asked how much money was invested at the theater just to play Lee’s new movie, Beiersdorf would only say “a lot.”

Some critics have complained that higher frame rates make films look overly realistic, allowing viewers to see too much detail, such as obvious makeup or imperfect background actors, interfering with the audience’s suspension of disbelief.

But Demetri Portelli, the stereographer for “Billy Lynn,” who helped Lee fine-tune the 3D filming process, said he thinks people will learn to love 120 FPS movies, just as audiences had to adjust to digital and CGI films.

“Just as a physical experience, this is really comfortable” for the audience, Portelli said. “They won’t have as much eye strain.”

“It’s the way we see with our eyes, because it’s much more comfortable, it’s much more expected,” agreed Larry Paul, senior director of technology and custom solutions at Christie. Paul assisted Lee during the filming of the movie in creating a projector setup where the crew could actually watch what they had filmed every day.

Higher frame rates give the brain more information, said Portelli, so audience members are less likely to feel sick to their stomach during lots of motion. Shooting at higher frames also gives more options to film editors to delete bad frames or create a certain effect by choosing certain frames.

This is not to say that the “Billy Lynn” experience will necessarily be a perfect example of what 120 FPS could possibly be. The movie was essentially an experiment for Lee.

“This is just the first film with a new format to try and show people what it looks like. So the question is, how will we use it in the future? What don’t we like and what do we like?” said Portelli.

The human eye may even be capable of seeing much more than 120 FPS. A study of United States Air Force pilots found the human eye could correctly recognize a flashed image that was only visible for 1/220th of a second.

“Billy Lynn’s Long Halftime Walk” will open again at hundreds of theaters on Nov. 18, but at the regular 24 FPS rate.