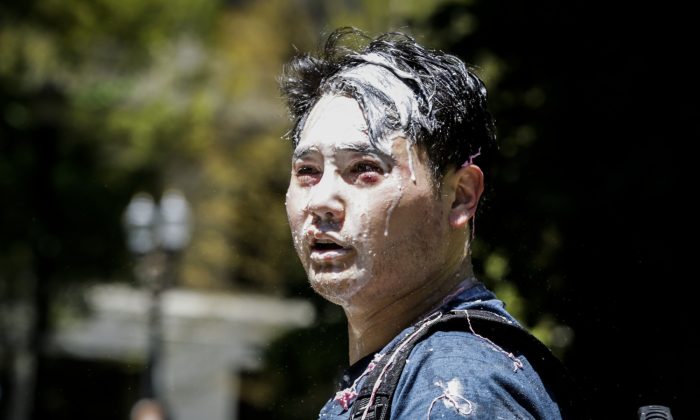 Andy Ngo, a Portland-based journalist, covered in an unknown substance after being attacked by Antifa in Portland, Ore., on June 29, 2019. (Moriah Ratner/Getty Images)
US News

Independent journalist Andy Ngo has filed a lawsuit against Portland Antifa for assault, battery, and “intentional infliction of emotional distress,” and accused the anarcho-communist group of running a racketeering enterprise.

Antifa members and others have tried to “suppress” Ngo’s activities “through a coordinated pattern of violent, harassing, and stalking behavior,” he alleges in the suit (pdf), filed on June 4 with the Multnomah County Circuit Court in Portland, Oregon.

Ngo is known to record protests that involve Antifa; meanwhile, he’s been criticized for being biased against the group in his reporting.

The suit lists as defendants the local Antifa cell, Rose City Antifa, as an unincorporated association, and dozens of other individuals, although only five of them are identified by name: Benjamin Bolen, John Hacker, Corbyn (Katherine) Belyea, Joseph Christian Evans, and Madison Lee Allen.

It also alleges that Luis Marquez is “one of the leaders” of the Antifa group.

“Defendants and their fellow Antifa members or supporters and ‘allies’ have physically accosted and viciously assaulted Ngo at protests that he was covering, stolen his photographic equipment, publicized the addresses of his family home and mother’s business, tried to force entry into his house, and stalked him in his personal life, including by attacking and stealing his phone while at a gym,” the suit says.

Ngo is asking the court to grant him $900,000 in damages and to prohibit the defendants from “harassing, threatening, harming” him and “from further engaging” in racketeering activities.

The suit details several incidents, including on May 1, 2019, when Ngo was allegedly punched in the gut by Bolen and then maced by an unidentified individual.

Less than a week later, Hacker allegedly threw an “unknown liquid” on Ngo at a local gym in “retaliation” for his reporting on Antifa. When Ngo started to record the incident on his phone, Hacker took it from him. Gym staff intervened to get the phone back to Ngo, the suit says.

During protests on June 29, 2019, Belyea and others allegedly threw “milkshakes” at Ngo.

“Portland Police issued a warning on social media that day that the ‘milkshakes’ may have contained quick-drying concrete,” the suit says.

“Without warning, Ngo was suddenly mobbed and bloodied by a group of Rose City Antifa members and others … who threw projectiles, including milkshakes, eggs, and containers; punched; and kicked him. Members also hit him in the head with plywood hard-edged sign placards, and carbon-hardened tactical gloves.”

Ngo sought medical attention, was diagnosed with a brain hemorrhage, and hospitalized overnight, the suit says.

On Oct. 31, 2019, “at least six masked Antifa members … approached Ngo’s family home and stood outside the door,” the suit says.

“Each of their masks bore a printout of Ngo’s face. They banged on Ngo’s windows, rang the doorbell, and tried to gain entry into Ngo’s family home by trying the door handle to see if the door was locked or not. They were not carrying trick or treat bags, and, on information and belief, intended to harass, intimidate, and harm Ngo.”

According to Attorney General William Barr, the Department of Justice has evidence that Antifa and other groups have been behind the recent riots in order to fuel their own agenda.

“We have evidence that Antifa and other similar extremist groups, as well as actors of a variety of different political persuasions, have been involved in instigating and participating in the violent activity,” he said on June 4. “We are also seeing foreign actors playing all sides to exacerbate the violence.”

The reporter said he joined the Antifa cell in July of a year Veritas didn’t disclose.

Veritas provided undercover footage that shows what the reporter described as “required lectures” the Antifa group’s prospective members need to attend. Several people lectured the prospects on how to conduct violent acts in a clandestine fashion, while minimizing risks to themselves, the footage showed.

“Don’t be that [expletive] guy with [expletive] spike brass knuckles getting photos taken of you,” one of the lecturers is heard saying in the video.

“Police are going to be like, ‘Perfect, we can prosecute these [expletive], look how violent they are.’ And not that we aren’t, but we need to [expletive] hide that [expletive].”

The lecturer apparently instructed the prospects to inflict grave injury on their opponents.

The reporter had left the organization “some time ago,” according to Veritas.

Similar instructions were given at training for Antifa members in New York City, according to Veritas video published June 5.

“If you get a good liver or kidney shot, it’s pretty much crippling them. They’re going to be doubled over and in a lot of pain. If you break one of the floating ribs, which are small and right down here, those are also very painful. It’s hard to move after that, to catch a breath. So, one good body shot could potentially give you all the time in the world to run away while they’re doubled over in pain, or really put a beating on them after that if you really don’t like the person,” an instructor is heard saying in the video.

Another instructor is heard saying, “We just kind of wanted to, in this space, reframe the idea of self-defense as not simply, you’re being acted upon by an aggressor. But it’s kind of a decision you make to fight back. In a lot of ways to say, I am human, and I occupy this space and I will not be [expletive] with.”