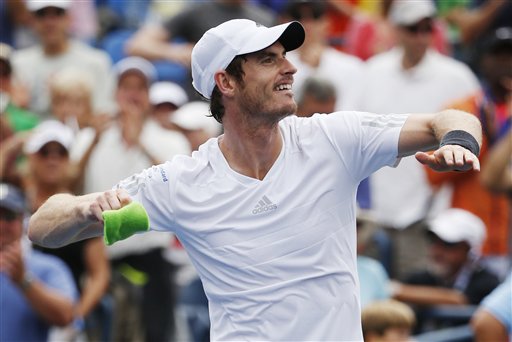 Andy Murray, of the United Kingdom, throws his wrist band into the crowd after defeating Andrey Kuznetsov, of Russia, during the third round of the 2014 U.S. Open tennis tournament, Saturday, Aug. 30, 2014, in New York. (AP Photo/Kathy Willens)
UK

Andy Murray is set to take on Jo-Wilfried Tsonga in the US Open fourth round on Monday, September 1.

The pair are scheduled to play at approximately 3 p.m. EDT at Arthur Ashe Stadium in Flushing Meadows in the Queens borough of New York City.

Live streaming will be available through CBS, Sky Sports, and TennisTV.

Other broadcasters include Eurosport in Europe, Ten Sports in the Indian subcontinent, WOWOW in Japan, CCTV in China, ESPN International in Mexico, Central America, the Caribbean and South America; and Fox Sports in Australia.

Murray and Tsonga are frequent foes, having played each other 13 ties since 2004. Tsonga won that first match in Nottingham but has only won three other times since then. However, he won the last match between the pair, at the Rogers Cup in Toronto earlier this year. Murray did win the match before that at the Miami Open.

The winner of this match will play the winner of No. 1 seed Novak Djokovic and No. 22 Philipp Kohlschreiber.

See an Associated Press story about Murray’s win below.

Murray overcomes mid-match lull to win at US Open

Murray, who dealt with severe cramping in his first-round victory Monday, awkwardly pulled up after some shots in the third set, wincing and grimacing occasionally. He double-faulted to get broken and drop that set.

But Murray went up a break at 2-1 in the fourth and held on from there.

Murray, the 2012 champion at Flushing Meadows, is into the fourth round of the U.S. Open seven times in the last 10 years.

He has not reached the final at any tournament since winning Wimbledon in July 2013.