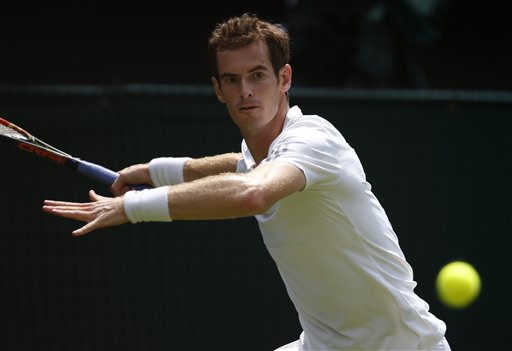 Andy Murray of Britain plays a return to David Goffin of Belgium during their first round match at the All England Lawn Tennis Championships in Wimbledon, London, Monday, June 23, 2014. (AP Photo/Pavel Golovkin)
Sports

The second round match will start on Court One at 1 p.m. BST.

Rola, 23, just turned pro last year but has already climbed to No. 92 in the world.

The 6’4″ Slovenian is not being taken lightly by Murray, the defending champion.

“He goes for his shots. He probably doesn’t have much grass-court experience because he hasn’t been on the Tour that long. He’s going to do well, for sure, because he has weapons. I haven’t seen him play loads. I saw him play his match against James [Ward] at the French Open.

“But he’s a tricky opponent with his style and being a big guy. He can generate power from the back of the court. He moves pretty well for a big guy too.”

“It is the hardest thing in sport to keep getting to the latter stages of the major events and performing year in year out,” Murray added. “Why? Because people keep improving, young players start coming through, you start to age a little bit and what you lose is it becomes harder to improve your game when you get older.”

Rola, who graduated from Ohio State University, beat unranked Pablo Andujar on Court Five in the first round, 6-3, 6-1, 6-4.

“I don’t think I actually realize where I am going to play,” Rola said, reported Independent. “I am going to walk up that stand and see how many people are actually watching this because I actually really never stepped on the Centre Court here. “Nothing can prepare me for this.”

“Hopefully I don’t poop my pants and don’t play well,” he added. “It would be a very, very big shock (if I could win).”

The odds are heavily in Murray’s favor, coming in at 1/100 across most betmakers. Rola has odds varying from 13 to 51.