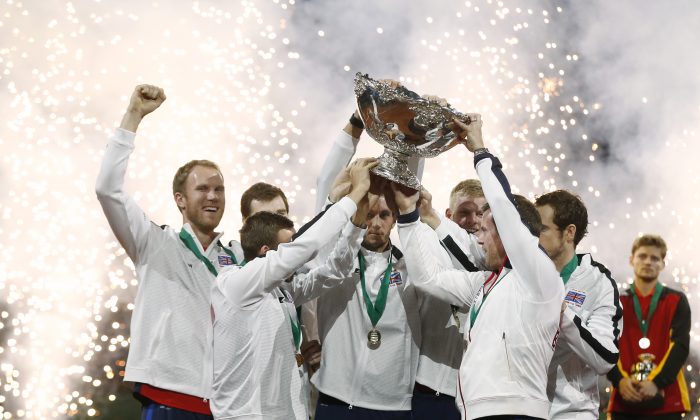 By beating David Goffin 6-3, 7-5, 6-3 on Sunday, Murray secured Britain’s 3-1 victory over Belgium in the Davis Cup final and ended a drought for the country dating back to 1936. The 79-year gap is the longest between titles in Davis Cup history.

“I can’t believe we did it,” Murray said on court. “We may never get an opportunity to do this again. We should celebrate tonight.”

Murray won all three points for Britain over the weekend and with his team holding an unassailable lead in the best-of-five series the final singles match was not played.

Britain is the only nation to have competed in all Davis Cup editions since 1900 and its 10th title makes it the third most successful nation after the United States (32) and Australia (28). But the last time it won the team competition, Fred Perry was its star. Britain last played in the final in 1978.

“Nothing may ever top this, it’s definitely one of the highlights of all of our careers.”
— Andy Murray

After hitting the backhand lob that clinched the match, Murray fell on his back on the clay at the Flanders Expo arena.

His teammates piled atop him but Murray was quick to wiggle himself out and ran toward the Belgian bench to congratulate his opponents, before being hoisted by the other British players and coaches.

Murray, who ended Britain’s 77-year wait for a men’s Wimbledon champion in 2013, then sat on the British team’s bench, his face hidden behind a Union Jack flag. He now has two Grand Slam titles and an Olympic gold medal to go with the Davis Cup title.

“Nice point to finish off, you just can’t believe you’ve won a major competition. It’s probably the most emotional I’ve been at the end of a match,” Murray said. “Nothing may ever top this, it’s definitely one of the highlights of all of our careers.”

“Andy was very solid today. I gave it all I had, I have no regrets.”
— David Goffin

Murray, ranked No. 2 in the world, is unbeaten in Davis Cup play this year.

He became only the third player after John McEnroe in 1982 and Mats Wilander in 1983 to achieve an 8-0 singles record in one calendar year since the introduction of the World Group in 1981 — and the first to win eight matches that counted.

“What he’s managed to do for the team is astonishing,” Britain’s captain Leon Smith said. “Absolutely incredible, amazing.”

After teaming with brother Jamie to win the doubles on Saturday, he is the first player since Pete Sampras in 1995 to win three live matches in a Davis Cup final. He is also only the second player to win 11 live matches in the same Davis Cup year after Ivan Ljubicic in 2005.

On Friday, Goffin came back from two sets down for the first time in his career to beat Kyle Edmund in the opening singles. Murray then leveled the series by beating Ruben Bemelmans in straight sets.

Goffin, ranked No. 16, had not won a set against Murray in two previous matches on the tour.

The Belgian appeared to get a glimmer of hope when he broke Murray’s serve for the first time for a 2-0 lead in the third set. But with nine sets of tennis over two days behind him, Goffin was unable to sustain the momentum and dropped his serve in the very next game. A sizzling backhand cross-court winner gave Murray two break points and Goffin then played a forehand wide.

Murray faced a break point in the next game but hit a service winner and an ace to come out unscathed. Then, as many times during the match, he pounced on Goffin’s second serve to break the Belgian at love and regain the initiative.

“Andy was very solid today,” Goffin said. “I gave it all I had, I have no regrets.”

Murray wasted his first match point by netting a backhand return. But the final lob was a superb shot to finish the long quest for the title as the loud British supporters — exploded in joy.

Murray said he stayed up late to watch fellow Briton Tyson Fury win the heavyweight boxing title, but did not need extra motivation.

“I was pumped the entire match,” he said.