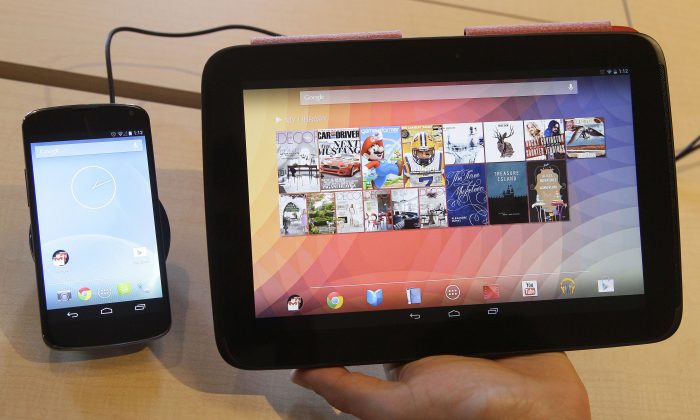 The Nexus 4 smartphone, left and the Nexus 10 tablet in a file photo. The upcoming Android KitKat 4.4.3 update did not happen on May 22, 2014 as rumored. (AP Photo/Jeff Chiu)
Tech

A rumor cropped up that the update, which users have been waiting months for, would finally come on May 22.

But the rumors, which appeared to originate from the website Myce, turned out to be wrong.

Some of the other latest rumors about the update come from TKTechNews and Sam Mobile.

The former posted a photo of a settings window on a phone, saying: “Galaxy s5 active or prime?”

The latter shared, citing a source, that new software features are being tested for the upcoming Galaxy Note 4, including “Swipe to launch Motion Launcher”, “Aqua Capture”, “Multi Network for Booster”, and “Smart Fingerprint.”

The features “are currently being tested on the Galaxy S5 with Android 4.4.3 as a base,” it reported.

The update was also confirmed by Samsung late last week on a developers website, reported the blog Sammy Today.

“I belive that Samsung is the first OEM to confirm Android KitKat 4.4.3 in official publication. Yes, 4.4.3 is just around the corner ;-),” he said.

The update has also been confirmed by Google in the past, including in a leak in a change log into the Android Open Source Project, though it later pulled the references. Sprint also confirmed the update for Nexus 5 but was forced to postpone the scheduled release due to unknown reasons.

Motorola also confirmed the update in a teaser video for the new Moto E phone, referring to it as the current version of Android.

Google said that the update will include the following enhancements for Android users: support for new Google spreadsheets, support for Android 4.4.3 and non-Nexus tablets, and minor UI updates and bug fixes.

The update is rumored to be included in the HTC One M8 and M7 sometime this month, June, or July.