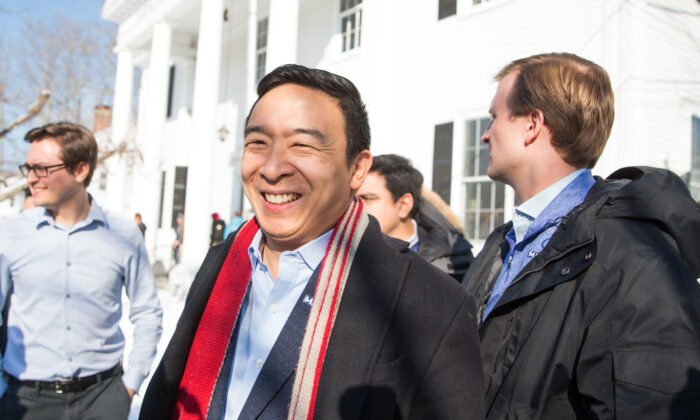 Speaking live on CNN on March 10, Yang, who ended his own bid for the Democratic nomination for president in February, called Biden the “right man for the job to help us not just defeat Donald Trump, but govern the country in the years ahead.”

“I believe that Joe Biden will be the Democratic nominee and I’ve always said I’m going to support whoever the nominee is,” Yang said on the show, which hired him as a political commentator after he ended his campaign last month.

Despite revealing he backed Bernie Sanders in 2016, and that he has “an admiration for Bernie [and] what he means to Americans,” and crediting him for inspiring his own presidential run, Yang said “the math says Joe is our prohibitive nominee.”

“I hereby am endorsing Joe Biden to be not just the nominee for the Democratic Party but the next president of the United States,” he said, adding: “We need to bring the party together. We need to start working on defeating Donald Trump in the fall.”

Yang’s show of support for Biden comes after his decisive win at the South Carolina primary on Feb. 29 and follows his roaring success on Tuesday’s Democratic primaries, which saw him capture several states including Mississippi, Missouri, and the top prize of Michigan, dealing Sanders a serious blow.

The former presidential contender told CNN that Biden called him about an endorsement last week and that it was “really hard to say no to Joe,” at that time but that he “wanted to let the democratic process play out, and I believe it has.”

Yang’s backing could prove to be particularly beneficial for Biden, having built up his own devoted and passionate group of supporters known as the “Yang Gang,” during his presidential campaign.

The tech entrepreneur also announced his endorsement on Twitter, writing: “The math says Joe is our prohibitive nominee. We need to bring the party together. We need to start working on defeating Donald Trump in the fall.”