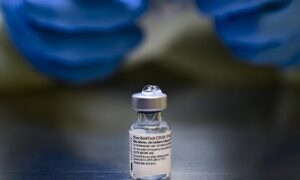 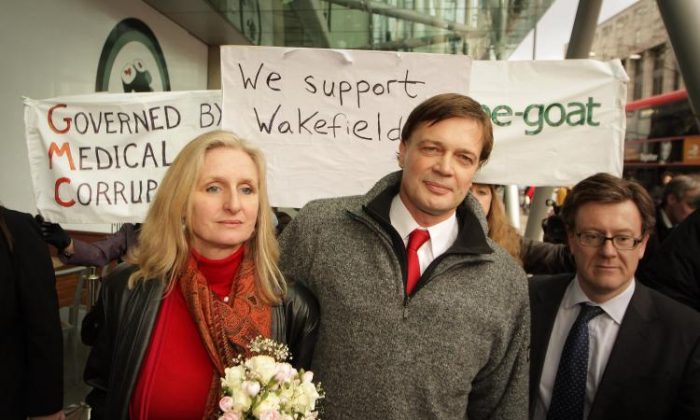 Dr Andrew Wakefield walks with his wife Carmel after speaking to reporters at the General Medical Council on Jan. 28, in London, England. (Peter Macdiarmid/Getty Images)
News

How did potential congressional testimony of a senior federal scientist blowing the whistle on omitted research showing an increased risk for autism from vaccination among African-American children devolve into race-baiting by black separatists, alienating civil rights groups? Even worse, how did it come to be that civil rights groups like the NAACP of California actually start supporting California Senate Bill 277 and Assembly Bill 2109 that would keep children from whom any required vaccination was withheld for any reason out of school and daycare respectively? The probable answer lies in the activities of one de-licensed British doctor: Andrew Wakefield.

His hijacking of the story about US Centers for Disease Control and Prevention (CDC) whistleblower Dr. William Thompson went far beyond releasing his name and surreptitious recordings of his voice without his permission. It also went far beyond tainting the story with Wakefield’s name, thereby alienating potential media coverage and possible congressional subpoena.

Wakefield also manipulated the message in a way that would be very appealing to a black separatist group like the Nation of Islam and very repulsive to civil rights groups like NAACP. Most notably, he did this by invoking the notoriously unethical syphilis experiment on African-American men in Tuskegee, Mississippi. The Nation of Islam has since popularized the Tuskegee invocation tactic that originated with Wakefield to denounce the SB277 bill, only to earn of the scorn of civil rights groups.

As reported in The Root, those groups put out the following message:

“Unfortunately, recent attacks on the measure have been vicious, unfounded, and distort the science and history of childhood immunization within our community,” a statement from the groups says, according to the Times. “Our organizations denounce assertions that vaccination of black children would be another Tuskegee experiment.”

And those groups include the following, according to The Root:

“The groups disputing [Nation of Islam Minister Tony] Muhammad’s comments include the California State Conference of the NAACP, the National Coalition of 100 Black Women, the Charles Drew Medical Society, the California Black Health Network and the Network of Ethnic Physician Organizations, the Times reports.”

Previously, Wakefield’s hijacking led to SB277’s co-sponsor Dr. Richard Pan painting the CDC whistleblower as “another Wakefield fraud.”  Now thanks to the message that originated with Wakefield and its appeal to the Nation of Islam, Pan has won some civil rights backing for his bill that he otherwise might not have had.

How ironic that the Age of Autism blog’s editor Dan Olmsted expressed disgust at the Nation of Islam’s involvement when he helped Wakefield broadcast the message that sat well with the Nation and not with the NAACP. Age of Autism has also been helping Wakefield promote a documentary he is making that would presumably resort to the same race-baiting tactic from when the whistleblower was outed.

Andrew Wakefield can already expect rave reviews from Louis Farrakhan and none from the NAACP.