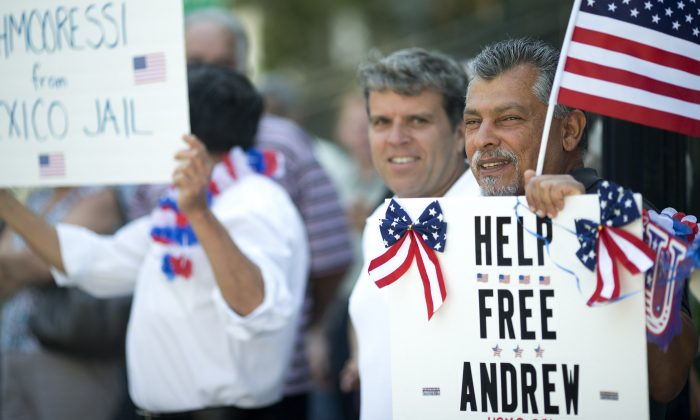 Paul Tahmooressi stands outside the Mexican Consulate in Miami, Monday, May 5, 2014, protesting the arrest of his son in Mexico. Andrew Tahmooressi, a Marine veteran who was arrested and jailed in Mexico on weapons charges for allegedly bringing guns across the border, says he never intended to leave the country but missed an exit when heading to meet friends in a border town. He told the newspaper that Mexican authorities found three guns inside the truck he had recently driven across the country to make a new start in San Diego. (AP Photo/J Pat Carter)
Americas

Andrew Tahmooressi Released? Source Says Marine Will be Out of Jail Sometime This Week

Andrew Tahmooressi is going to be released this week, according to one of the latest reports on his situation.

The Marine Sgt. has been imprisoned for months in Mexico for a firearms violation.

A source Andrew Tahmooressi within the House Foreign Affairs Committee staff told the TPNN blog that Tahmooressi is slated to be released sometime this week.

The information comes from the office of Mexico’s Attorney General.

A growing movement to get Tahmooressi out of jail has been working on the case, appealing to U.S. officials to apply pressure to the Mexican government.

The case began receiving more attention when U.S. soldier Bowe Bergdahl, an alleged deserter, was obtained from the Taliban through a prisoner exchange.

“This Administration went to unprecedented lengths for Bowe Bergdhal by making a lopsided deal with an untrustworthy partner, even when there other options still on the table that neither involved the Taliban nor prisoners released from Guantanamo Bay,” Rep. Duncan Hunter, R-Calif, told Fox News.

“Meanwhile, as far the Administration went for Bergdahl, Andrew Tahmooressi is still stuck in a Mexican jail for making a wrong turn and the only thing grabbing the president’s attention so far is an online petition that forces him to respond.”

Mark Podlaski, who served with Tahmooressi in Afghanistan, wondered why Obama and Secretary of State John Kerry couldn’t make a few phone calls to free Tahmooressi.

“I’ve never been this upset with my government,” he said. “Tahmooressi gave his mind and body two times — referring to his two tours of duty in Afghanistan — for this country.”

Tahmooressi himself called The Blaze and said that he’s been severely mistreated in prison in Mexico.

He said other inmates have been threatening to rape and kill him, terrorizing him until he was “fearful to the point where my heart was pounding and I couldn’t have gotten a single word out if I had to yell for help.”