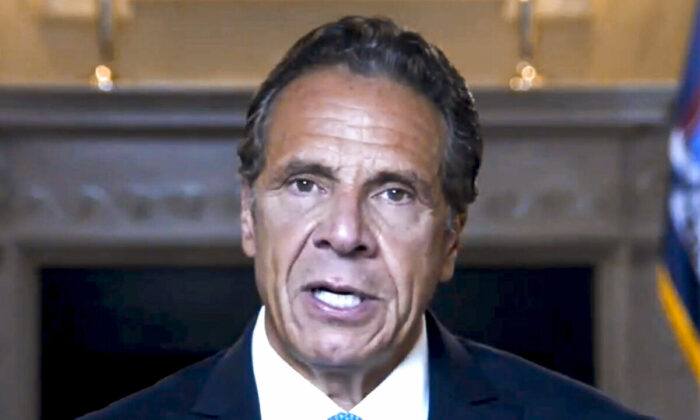 Former New York Gov. Andrew Cuomo was charged with a misdemeanor forcible touching on Thursday amid confusion about the complaint.

The complaint accuses Cuomo, who resigned earlier this year amid misconduct allegations, of groping a woman in an unlawful manner, and he allegedly “did knowingly, and intentionally commit the class A misdemeanor of Forcible Touching.”

The incident allegedly occurred on the afternoon of Dec. 7, 2020, in the Albany Executive Mansion, which was his official residence, according to the document, which was signed by Albany County sheriff’s investigator Amy Kowalski. The identity of the alleged victim was redacted from the complaint.

Forcible touching, a class A misdemeanor in New York state, can carry a maximum sentence of one year in jail or three years probation.

“A misdemeanor complaint was filed in Albany City Court against the former governor this afternoon,” said Lucian Chalfen, a spokesman with the New York state court system, to local media outlets on Thursday. Another spokesperson told Fox News:  “As this is a sex crime, a redacted complaint will be available shortly.”

It came after Times Union of Albany reported that the complaint was erroneously filed in the Albany City Court, and neither the alleged victim, Brittany Commisso, nor her lawyer, was aware of it. Neither the local sheriff’s office nor Albany district attorney had made a decision against Cuomo.

An Office of Court Administration spokesperson told the paper that the misdemeanor complaint against Cuomo was indeed filed Thursday in Albany City Court.

The former governor resigned in August amid sexual harassment allegations from about a dozen women who worked for him over the years. Cuomo, a Democrat, repeatedly denied the allegations during media appearances.

“New York tough means New York loving, and I love New York and I love you,” Cuomo said at the time of his resignation. “I would never want to be unhelpful in any way, and I think given the circumstances, the best way I can help now is if I step aside and let government get back to governing, and therefore, that’s what I’ll do.”

But Cuomo, who was universally praised by mainstream media outlets over his handling of the pandemic in 2020, said that some of his behavior to others could be misconstrued.

“I have slipped and called people ‘honey, ’sweetheart’ and ‘darling.’ I mean it to be endearing but women found it dated and offensive,” Cuomo said. “I take full responsibility for my actions. I have been too familiar with people. My sense of humor can be insensitive and off-putting.”

After his resignation, Lt. Gov. Kathy Hochul, also a Democrat, took over the governorship.