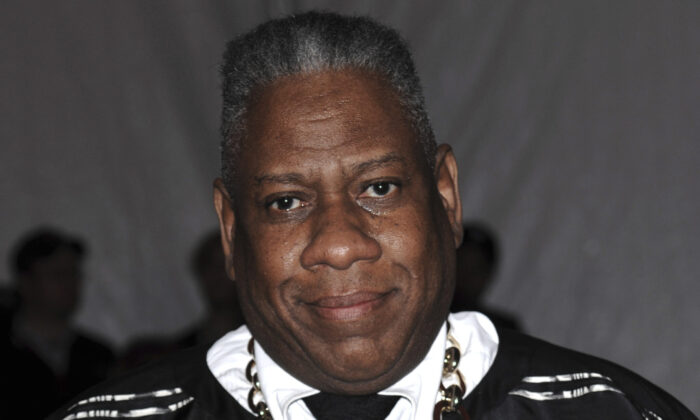 Former Vogue Editor-at-Large André Leon Talley died on Tuesday at the age of 73.

The towering former creative director and editor-at-large of Vogue died at a hospital in White Plains, New York, according to TMZ. His literary agent David Vigliano confirmed Talley’s death to USA Today late Tuesday, but no additional details were immediately available.

“Mr. Talley was the larger-than-life, longtime creative director during its rise to dominance as the world’s fashion bible,” his representatives said.

Talley was an influential fashion journalist who worked at Women’s Wear Daily and Vogue and was a regular in the front row of fashion shows in New York and Europe. At six feet six inches tall, Talley cut an imposing figure wherever he went, with his stature, his considerable influence on the fashion world, and his bold looks.

In a 2013 Vanity Fair spread titled “The Eyeful Tower,” Talley was described as “perhaps the industry’s most important link to the past.” Designer Tom Ford told the magazine Talley was “one of the last great fashion editors who has an incredible sense of fashion history. … He can see through everything you do to the original reference, predict what was on your inspiration board.”

Edward Enninful, editor-in-chief of British Vogue and European editorial director of Condé Nast, remembered Talley in a post on Instagram.

“R.I.P dearest Andre. Without you, there would be no me. Thank you for paving the way,” he wrote.

Designer Diane von Furstenberg praised Talley on Instagram, writing, “No one saw the world in a more glamorous way than you did … no one was grander and more soulful than you were.”

“The world will be less joyful now,” she said, adding, “I have loved you and laughed with you for 45 years…. I will miss your loud screams and your loyal friendship.”

He worked as a park ranger in Washington, D.C. and Maryland, where he told visitors about slaves who built Fort Washington and dressed up like a Civil War soldier, he told The Associated Press in 2003.

After stints with Interview magazine and Women’s Wear Daily, Talley was hired at Vogue in 1983 by Editor-in-Chief Anna Wintour and was appointed its creative director in 1988.

“There was no higher accolade she could give me, as the masthead portrayed. Anna Wintour made me the highest-ranking black man in the history of fashion journalism,” Talley wrote in his 2020 memoir “The Chiffon Trenches.”

A cause of death has not yet been revealed.