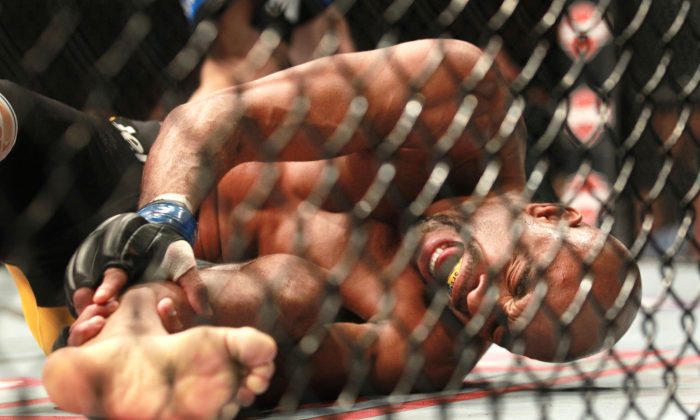 Anderson Silva, of Brazil, screams after kicking Chris Weidman of Baldwin, N.Y., and injuring his leg during the UFC 168 mixed martial arts middleweight championship bout on Saturday, Dec. 28, 2013, in Las Vegas. Weidman won during the second round by a technical knock out after the kick by Silva. (AP Photo/The Las Vegas Sun, Sam Morris)
Sports

Anderson Silva vs Nick Diaz is a potential fight that has caught the attention of MMA fans.

Silva has been out since he broke his leg late last year in the UFC Middleweight Championship fight against Chris Weidmen.

Silva has been rehabbing intensely and is trying to get back to fighting sometime in 2015.

As his recovery proceeds people have started discussing who he’ll face when he gets back.

Silva’s manager Ed Soares confirmed to Fox that they’re interested in a bout with Diaz, who has said in the past that he would love to fight Silva.

Diaz confirmed recently with UFC Tonight that he would be interested in coming out of retirement to fight Silva.

Diaz retired after he lost in a decision to Georges St-Pierre in march 2013.

A likely spot for the fight would be the Super Bowl pay-per-view in early 2015.

MMACorner is among the blogs and websites to hail the fight as the right one for the UFC to make.

“For Silva, this would be a great comeback fight. That’s not just because it would sell a lot of tickets, but because it would be a great test to see whether or not he can still compete with the sport’s elite. If Silva could do to Diaz what he has done to so many elite fighters over the course of his career, we would all know that he is truly back and remains a force to be reckoned with,” it said.

“If he were to lose, we would know that his time atop the sport is really over. There is a lot of work that still needs to get done in order for this fight to happen, so don’t get too excited just yet. However, both fighters have expressed interest in the match-up, so it’s not out of the realm of possibility. If the UFC can make the numbers right to entice Diaz back to the cage, there is a very good chance we could be seeing these two mix it up.”