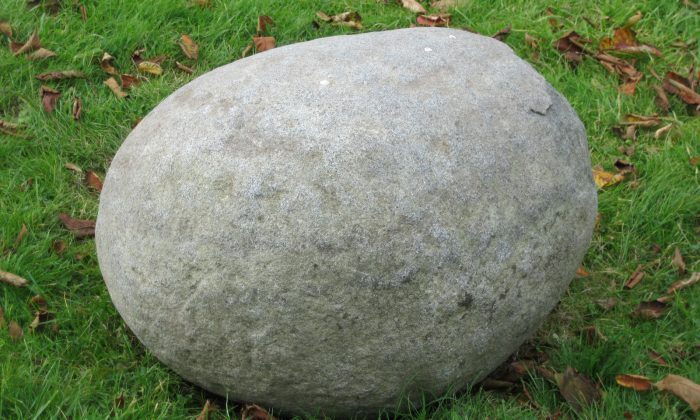 An ancient tradition has revived in recent years in Wales, UK. Young men have set out to prove their strength and manhood by lifting a “Stone of Strength” or “Feat Stone.” For centuries the stone has been used in a test of strength. Earlier this month, a Welsh strongman lifted above his shoulder, for the first time in living memory, the Feat Stone that has sat in front of the Neuadd Goffa Criccieth Memorial Hall in Wales since the hall was built in 1925.

Wales Online reported that Mark Jeanes, a laborer, has proved his renown as one of the strongest men in the world by lifting Y Maen Camp (The Feat Stone), which weighs 392 pounds (177.8 kilograms) and especially difficult to lift due to its shape. Others have lifted it inches off the ground, but Jeanes is the first to successfully heave it so high.

Jeanes, writing to Ancient Origins on Twitter, said: “The stone was a lot harder than normal due to the irregular shape. One side was heavier than the other and as it was smooth … to grip made it a lot harder. We were allowed chalk, but that didn’t help a great deal. I found it fairly comfy to get it to my knees and to my chest, but I needed to time it right with the camber of the stone to catch it on my chest to pop it up on my shoulder… I feel confident I can get it again and will I love the fact that I’m the first man to ever to do it and will be seeking a new challenge.”

Stone-lifting isn’t exclusively a Welsh tradition. Stones from ancient Greece and Rome have inscriptions 2,000 years old showing who successfully lifted them. Lifting or throwing heavy stones was also practiced in Iceland, Pakistan, Japan, and other places.

Terry Todd, an organizer of the Arnold Strongman competition (unrelated to the Feat Stone in Wales), said in a video titled “Strongman: The Atlas Stone”: “This business of lifting weights doesn’t just go back 15 or 20 years. It’s an old, old activity … People understood strength back then [in ancient Rome and Greece] and they knew they could manifest it then by lifting heavy stones. … People now are lifting a round stone almost 600 pounds. Imagine that. 600 pounds is a big weight for someone to do a deadlift. So the level of performance is just extraordinary.”

The Welsh Feat Stone lifted by Jeanes is the largest on record in the British Isles, but larger stones (some 600 pounds) have been used in modern strongman contests. The use of stones to test strength is relatively new to the world of televised sports. However, contestants usually lift almost spherical stones chest-high. Jeanes lifted a lopsided stone to shoulder height.

On his Twitter page, Mark Jeanes says he is recognized as the eighth natural strongest man in the world. He said his heaviest stone lift is 463 pounds (210 kilograms).

In  Wales, stone lifting was used both as a rite of passage for young men, and as a way to develop strength in preparation for battle. According to the old Welsh text, “Y Pedair Camp ar Hugainyn” (“24 Measures of a Man”), it was a common practice for young men to challenge themselves through stone lifting.

*Feature image of the Stone of Strength by Alan Fryer, CC-BY