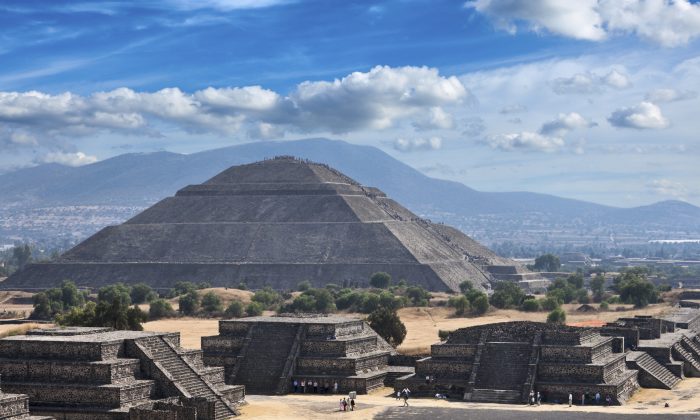 About 30 miles northeast of Mexico City, Teotihuacan—or Teo, as archaeologists call it—is the most visited archaeological ruin in the Western Hemisphere.

David Carballo, an assistant professor of archaeology at Boston University and author of “Urbanization and Religion in Ancient Central Mexico” (Oxford University Press, 2015), has studied Teotihuacan, a UNESCO World Heritage Site, since 1999, trying to learn how this ancient metropolis arose around the first century BCE and flourished for more than 600 years.

He does this not by studying the grand pyramids and other remnants of Teo’s elite, but by examining a group of working-class neighborhoods in a district called Tlajinga.

That knowledge, in turn, may inform a host of questions about our modern cities: Who migrates to cities and why? How do rulers maintain complex infrastructure? And how can a government attract strivers from many different cultures and mold them into a new, unified people? In other words, how can we all get along?

More than half the people in the world now live in cities, according to the World Health Organization, and as more people migrate to urban areas, finding answers to these questions becomes urgent.

“Comparing ancient cities to modern cities is long overdue, and David Carballo has been at the forefront of this movement,” says George Cowgill, professor emeritus of archaeology at Arizona State University. Cowgill says that Carballo’s focus on the Tlajinga district, as well as other places, is critical for understanding the city at large.

“Imagine studying Boston by just looking at the State House and a few skyscrapers—it’s ridiculous,” he says. “We need to know the whole range of the city, from the commoners to the elites.”

What’s In It For Regular People?

The pyramids are good for one thing, at least: a sweeping view of the city. Carballo makes his way to the summit and points out Tlajinga, just over a mile to the south. Like many modern cities, Teo had a compact downtown area arranged on an orderly grid, with temples, open market plazas, and stylish, elite apartment housing. Simpler neighborhoods like Tlajinga arose at a distance from downtown.

Archaeologists estimate that Teo encompassed about eight square miles, with more than 100,000 inhabitants at its peak. For comparison, medieval London covered only about one square mile and its population didn’t break 100,000 until the 16th century.

Archaeologists say that Teotihuacan may have thrived, in part, anyway, because of the city’s focus on harmony and cooperation. “Whoever ruled Teotihuacan did not emphasize the individual,” Carballo says. The colorful murals they painted downtown, for instance, highlight timeless themes of fertility and abundance, and show priests or warriors standing in a line, with none clearly prominent.

While the attractive city center may have contributed to civic pride, it also required a lot of upkeep. As Carballo puts it, “You need a lot of people carrying a lot of baskets full of stone and rubble.” He says that a labor tax was probably an essential part of the economy.

Why would anyone immigrate to a city where they had to lug rubble to build pyramids? That’s the question that draws Carballo to Tlajinga. “We know why the elites would want to live here, but what’s in it for the other 80 percent?” he asks. “The practical side of me knows there has to be some material gain.”

Carballo steers his pickup truck down a rutted dirt road and pulls off into a scrubby, overgrown field. It’s an unpromising spot for archaeological insight: dotted with spiky stands of prickly pear cactus and bisected by high-voltage power lines. “Here it is,” says Carballo, stepping out of the truck and shutting the door behind him. “Tlajinga—in all its glory.”

He walks to a massive anthill and points to some tiny black flakes in the gravel around it: obsidian, the volcanic glass that ancient people used to craft blades, spear points, and scrapers. The ground is littered with it. “These tiny little chips indicate an obsidian workshop—people who were just using obsidian tools wouldn’t leave a zillion little flakes behind.” These scraps allow archaeologists to reconstruct the sequence of production, learning who made what, and where. This information is critical for understanding Teo.

In the summers of 2013 and 2014, Carballo, his students, and colleagues excavated parts of two apartment blocks at Tlajinga. They recovered about one million pieces of obsidian—more than 900 pounds. Carballo’s students and colleagues are now analyzing the artifacts in the Teotihuacan Research Laboratory in nearby San Juan, which Arizona State manages, and already gaining a deeper understanding of the ancient economy.

“If all that’s been excavated are the big institutions, you’re going to say they’re controlling the economy,” says Boston University PhD candidate David Walton, who is analyzing a portion of the obsidian artifacts found at Tlajinga. “But the more we excavate households in Mesoamerica, the more we realize that domestic economies are the engine that’s driving the whole economic system. It’s coming from the ground up.”

Carballo’s biggest surprise during the Tlajinga excavation was the range and quality of goods found in this working-class enclave: a delicately painted ceramic vessel, a rare life-size stone mask.

“In Tlajinga, you could be a humble craftsman and still have a niche within the economy,” he says. “The take-home message is that even poorer people in Teo lived pretty well. You can see why this city was a draw.”

The NSF funds this research.

Source: Condensed from the original by Boston University. Republished from Futurity.org under Creative Commons License 4.0.