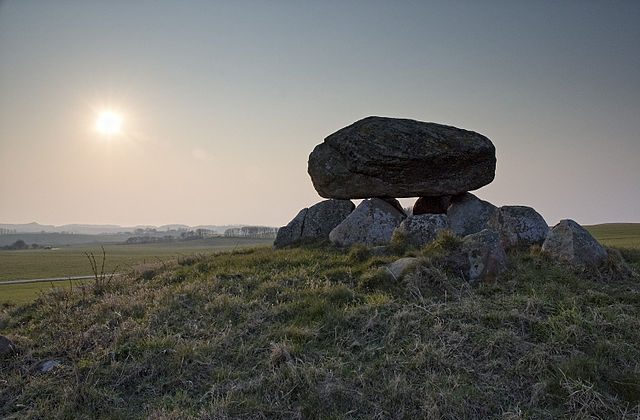 Ancient Remains: Iron Age Necromancy on the Bones of the Dead?

In 2012 ancient remains were discovered in a bog in Denmark – not an uncommon occurrence. However, after examining the bones, archaeologists were startled by what appeared to be a brutal desecration of the skeletal remains. The macabre discovery tested what we thought we knew about the rituals and beliefs of Iron Age man. Archaeologists are now trying to piece together what happened to dozens of dead warriors found at Alken Enge.

Modern man has many culturally unique and varied ways of dealing with death and the dead, sometimes through the common tradition of burying our fallen in the ground, and performing mourning rituals like memorials and funerals. Archaeology and ancient man, however, is constantly challenging our preconceived notions about how life and death was experienced and handled in antiquity.

In the wetlands and peat of Alken Enge, a team of archaeologists found the mass grave containing at least 60 bodies of Iron Age warriors. Their remains had been ritually mutilated in macabre fashion, but only after the dead had lain on the field of battle for months.

LiveScience writes of the discovery, “at least six months after the soldiers died, their bones were collected, scraped of remaining flesh, sorted and dumped in a lake. Some were handled in a truly bizarre manner; for instance, four pelvises were found strung on a stick.”

Without being able to know for certain, the guess by researchers is that the desecration of the body parts were an ancient ritual.  Ancient Origins quotes Mads Kähler Holst, project manager at the dig: “It seems that this was a holy site for a pagan religion – a sacred grove – where the victorious conclusion of major battles was marked by the ritual presentation and destruction of the bones of the vanquished warriors.”

But were these grisly desecrations a barbaric ritual of triumph over defeated enemies, as historical Roman records describe? Might they also have been Iron Age rites of warding, ensuring the ghosts of a fallen enemy wouldn’t return from the grave to terrorize villages or wreak revenge?

Protohistoric cultures had their own traditions of ensuring the respect of their ancestors, and protection from their dead enemies. Cults of death and the practice of necromancy (‘magical’ rituals involving communicating with the dead) were a way of worshiping those who came before, or creating dangerous monsters.

Victor Domin of Concordia University writes of incidents of necromancy in the ancient Near East, where “Negligible treatment of the deceased’s remains could result in benign ghosts turning into malevolent spirits. Negative treatment of the deceased could include improper burial or inadequate portions of funerary offerings.” Perhaps such ‘proper’ rituals may have been revealed in Denmark at the Alken Enge burial site.

Seiðr (seidhr) was a type of Scandinavian Iron Age sorcery. Found in Sagas and other literature, the shamanic-like practice of spells and rituals was used for divining the future, and for cursing enemies.  Norse Folkesagn (folktales) and ancient beliefs included the mythology of the draugr, an undead creature, literally meaning “again-walker”. Not unlike modern zombies of popular culture, the draugr was a corpse risen from the grave, a decomposed body. It would seek out and attack those who had wronged it in life, and terrify the countryside. So horrifying was the prospect of inadvertently creating a draugr that special care was taken to ensure a proper burial of the dead.

Traditionally, iron scissors were placed on the chest of the recently deceased, and twigs tucked into their clothing. Gruesomely, needles would be driven into the soles of the feet to prevent walking, and their toes were tied together. The ‘corpse door’ was considered the most effective deterrent – a special door was built and the body was passed through. People surrounded the corpse as this was done to confuse and disorient the spirit of the departed, and then the doorway would be sealed up to prevent a return.

The Nørre Nærå Runestone has a grave binding inscription that was used to ensure the dead stayed in their graves.

These kinds of protective burial rites can be found around the globe. One such example is the recently discovered ‘vampire’ graves in Eastern Europe where archaeological digs reveal unusual mortuary precautions intended on preventing the corpse from returning as Nosferatu. The teeth are often removed, bodies staked with wood, and a stone or brick is found in the mouth.

Could the broken skulls, dismembered skeletons, and strange tampering with remains at the Iron Age battlefield in Denmark be, as researchers suggest, the pagan rituals of victors over the defeated? Or could they also have been careful precautions to avoid the supernatural?

These beliefs, rituals, and extreme measures may seem ignorant, barbaric, gruesome or excessive to modern sensitivities, but to the times and peoples who practiced them, they were a necessary part of life – and death.