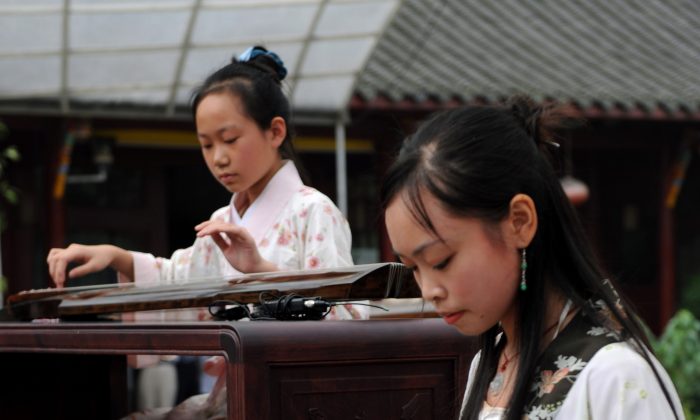 One of the very first pieces of recorded Chinese literature is the “Classic of Poetry,” a collection of 3,000-year-old lyrics and verses of the early Zhou Dynasty. Compiled by Confucius, it is considered one of the five great Chinese scholarly works.

The first poem, “Cry of the Ospreys,” describes the marriage of King Wen, the first Zhou ruler, to his queen Tai Si. Flutes and drums and bells guide the royal couple to their union, which was understood to have been ordained by Shang Di, the emperor of heaven.

Confucius admired the early Zhou (1046 B.C.—770 B.C.) for its virtuous governance and upright culture, expressed in the maintenance of ritual or propriety, known in Chinese as “li.” For traditional Chinese, who saw the family as the basic unit of society, the prosperity of a royal or imperial house hinged on marriage. It was said that a half-divine sage ruler of Chinese legend, Fu Xi, had established civilization through the creation of marital rites.

Li, covering ritual, propriety, and etiquette, is the third of five cardinal virtues taught by Confucius. This ideal is often seen discussed in tandem with Chinese musical theory, as recorded in conversational texts compiled by the sage’s disciples.

The other four cardinal virtues are benevolence, righteousness, wisdom, and faith. What sets li apart from the others is its emphasis on human conduct, as opposed to the cultivation of more abstract or intrinsic virtues.

The foundation of li, as the foundation of filial piety, lies in the veneration of heaven. Beginning in the Zhou Dynasty, about 500 years before Confucius, the Chinese worshipped Shang Di, a sky deity whose title translates to the Lord on High and whom some Christian missionaries in China rendered simply as God.

‘Guiding the People Through Ritual and Music’

Just as Western theater developed from ancient Greek festivals held in honor of the gods, China’s etiquette and music originated in the religious rites meant to maintain bonds between the human and divine realms.

Music played a central role in pre-imperial Chinese religious rites as well as folk culture. While in today’s modern vernacular Chinese language uses li as a catch-all term referring to etiquette and manners, in classical understanding, it encompassed the entire spiritual pantheon, of which music was a part.

By the Zhou Dynasty, individual systems of rites and music had come into their own, but remained linked.

In compiling the “Classic of Poetry,” Confucius intended to teach his contemporaries the traditions and mentality of the Zhou people and rulers by passing down their lyrics and ballads. Among the Zhou aristocracy, cultivation through mastery of the performing arts was a part of life in high society. The children of royalty and nobles were required to study classical music and dance from a young age.

Governing elites, Confucius said, would do well to rule their people through li, and thus mitigate the need for harsh laws and policing. Music, with its unspoken feeling and depth, could be used to inculcate and reinforce the rites among the people naturally.

The word “liyue,” meaning rites and music, is a common term found in Confucian canon, reflecting the roles each played in a balanced and harmonious culture.

In the “Classic of Rites and Music,” it is said that people, once lured by material wealth and gain, would lose their compassionate nature and harbor thoughts of greed, cruelty, fraud, and so forth. It was for this reason that the ancient kings cultivated music and ritual to regulate the heart. “Through ritual, human nature is preserved, through music, harmony is upheld.”

In modern China, the one-party state officially promotes communist ideology. Only under the Communist Party were the three spiritual schools of Buddhism, Taoism, and Confucianism persecuted simultaneously. Even today, in the name of “social harmony” and “stability maintenance,” spiritual and cultural repression is enforced by a vast array of police agencies and justified by the Communist Party’s propaganda mouthpieces.

The price of this repression is ideological bankruptcy—the Party’s atheist and materialist identity breaks with thousands of years of traditional Chinese heritage. Thinking of the rites and odes that Confucius had admired, we are reminded of the words of George Orwell, who described a “vitality which the Party did not share and could not kill.”

As a line from the British author’s novel “Nineteen Eighty-Four” reads, “The birds sang, the proles sang, the Party did not sing.”