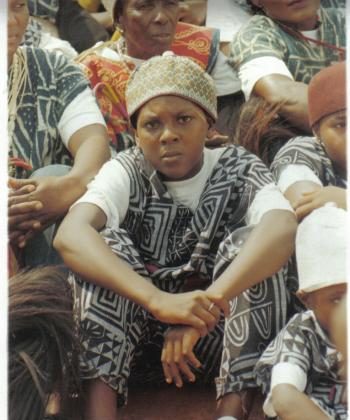 The new king of the Fondonera clan, Nteubou Etienne Djeudo Jr., among the king’s children mourning in a sitting posture. (The Epoch Times)
Africa

A Rare Job for a Woman in Ancient African Clan

By Sonya Bryskine
biggersmaller
Print
“The choice of a new chief is usually not a human affair. It is considered as divine,” says Akwalefo Bernadette Djeudo, who has become the first woman to be appointed as the Chief of the ancient Fondonera clan.

For the Fondonera clan in the West African nation of Cameroon, choosing a leader is not a simple affair.

For the last seven months the top position has remained empty. The death of the King who ruled the clan for the last 36 years meant the search had to settle on a man, tagged by a mark from heaven.

The tradition says that at birth the body of the next ruler will show an official mark seen only by enlightened ones. Soon the mark disappears and the identity of the next divinely chosen leader is kept secret from all other family members to ensure that jealousy does not lead to an ‘untimely death.’

In rare move the new heir, traditionally known as Fo, was chosen to be a 13-year-old Chief Nteubou Djeudo Etienne Junior

Being too young to take the throne, the chiefdom will be ruled by a woman for the first time in the clan’s history and in the history of the Western Region of Cameroon. Bernadette will remain the Queen Mother and regent until the “divinely chosen” king will be 21.

The Queen Mother’s role is important in the smooth running of the clan. She is in charge of looking for new wives for the King, with polygomy being widely accepted in the Fondonera clan.

“The Queen Mother plays a big role for women empowerment within the clan,” comments Bernadette.

She is also the minister of agriculture and social affaires and can contact the Nine Notables if there is a natural calamity.

The Nine Notables, who are part of the traditional administration and the King’s private cabinet, watch over the clan’s spiritual direction. No major decisions can be taken in the clan without their knowledge.

“They ought to be very truthful and sincere people and should spend most of their time ensuring that the clan is peaceful, secure and protected."

While Bernadette acknowledges the resistance to her appointment, she is prepared to serve the people.

“Many Fondonera people, including some elites, contested this part of the will and promised me hell if I accepted. They claim that in the history of the clan no woman had ever assumed such a role. Some said I was unfit to handle the post.”

The Fondonera clan is comprised of 24 villages or about 20,000 people. It is a microcosm of ancient African traditions and modern governance.

Although Christianity has been integrated by the white settlers from the 1800s, sacrifices to the ancient gods are common.

“Sacrifices are always offered to them for purification and cleansing of the clan,” says Bernadette.

The clan has an attitude of war-like peacefulness, says Bernadette.

“The people are war-like and at the same time peaceful and hospitable. They believe that he who has peace must always be ready for war.”

According to a 1977 Government Act, traditional rulers in Cameroon fall under the authority of the Ministry of Territorial Administration. Their role is to help the government in its administrative task at the local and grass root level.

“They are the auxiliaries of the administration and they inform the local population of all government decisions, they maintain public peace and lead the people in all local and community development efforts.”

The Fondonera clan settlements are located about 25km from Dschang – a popular tourist hotspot, developed in the 1940s when Cameroon existed under the French rule.

Prior to that the British occupied the lands, which made the clan a strange trilingual blend of English, French and traditional Ndouga la’h language.

Agriculture forms the basis of the economy. Both plantation and subsistent farming are done. Arabica coffee is the basic monocultural crop, together with cola nuts and food crops. Raffia palm wine is another important trading product.

For Bernadette, the new regency over the Fondonera clan is an honor from the Gods and one she is prepared to take seriously.

“I hope to develop a plan of action for the regency. I hope to work collaboratively with all the stakeholders in the Fondonera Clan…to bring sustainable development in the clan.