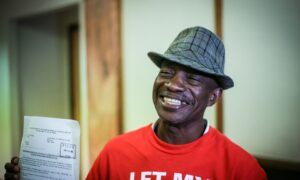 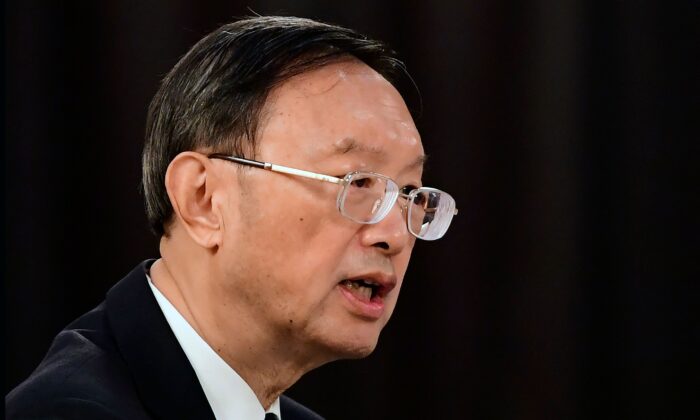 Yang Jiechi, director of the Central Foreign Affairs Commission Office for the People’s Republic of China, addresses the U.S. delegation at the opening session of U.S.–China talks at the Captain Cook Hotel in Anchorage, Alaska, on March 18, 2021. (Frederic J. Brown/Pool/AFP via Getty Images)
Viewpoints

Anchorage Meeting Shows Need for US Strategy to Confront China

The four great triumphs of international grand strategy in the last century were all conceived and executed by American statesmen.

First, starting in 1940, Franklin Delano Roosevelt devised the strategy whereby the United States gave all aid short of war to Britain and Canada, the democracies fighting Nazism, and implicitly convinced Adolf Hitler that eventually he would find himself at war with America.

Roosevelt extended Atlantic territorial waters from 3 miles to 1800 miles and ordered the U.S. Navy to attack the German ships on detection. At the same time, he sold the British and Canadians anything they wished and they could pay for it when they could.

This was an idiosyncratic definition of neutrality, and it provoked Hitler to attack the Soviet Union because he believed that only by that method would he be able to repel an Anglo-American attack on Western Europe without being stabbed in the back by Stalin, his ostensible ally.

Thus, because he coordinated nothing with the Japanese, from whom Roosevelt withheld the oil necessary to continue its invasion of China and Indochina, Hitler found himself at war simultaneously with the USSR, the British Commonwealth, and the United States, a contest he could not win.

Roosevelt, who spoke French and German fluently and was conversant with European history, realized like all serious statesman since Richelieu that European wars are won by those who end up in control of Germany.

And by Roosevelt’s design, the Soviet Union absorbed 90 percent of the casualties, as between the Big Three, and 95 percent of the physical damage, in subduing Nazi Germany, and ended up with only temporary and illegal occupation of secondary strategic assets in Eastern Europe.

The second great triumph for American statesmanship was the Cold War strategy devised by Roosevelt’s strategic team: Truman, Marshall, Acheson, Eisenhower, Kennan, Bohlen, and others. This was the containment strategy by which a network of American-led alliances blocked Soviet military advances in Western Europe and subversion of vulnerable countries elsewhere and eventually predominated as a political, economic, and social system superior to the corrupt husk of Marxism. This created the stasis in which, ultimately, the Soviet Union could not be competitive.

The completion of this inspired concept required the last two great acts of international statesmanship in the last century: first Richard Nixon’s triangulation of Great Power relations to put the Soviet Union under increasing pressure.

By reopening relations with China in 1972 and putting them on a normal footing, he insured that the Soviet Union would not only be fighting an uphill competition against a more prosperous and scientifically advanced United States, but that it would also be contending for mastery in the communist world and in the Eurasian landmass with a China that could rely on some level of American support if it were attacked.

And finally, President Ronald Reagan devised the Strategic Defense Initiative in 1983. This was a laser-based, non-nuclear missile defense system, which, though much-mocked as “Star Wars,” clearly possessed some potential to deprive the Soviet Union of its nuclear first strike capability.

Reagan and his advisers correctly deduced that the USSR was spending approximately half of its GDP on defense and that the prospect of having an ineffective first strike capability would knock that sword from its hands and leave it too vulnerable and demoralized to continue as a competitive superpower.

As all the world knows, this is precisely what happened. President Mikhail Gorbachev made a desperate effort to reach agreement on the abolition of nuclear weapons, including defensive weapons, thus maintaining some sort of military parity.

This was declined and the Soviet Union quietly disintegrated into 15 countries without a shot ever having been fired in anger between the two great super power-protagonists. The Cold War was over and the Hammer and Sickle came down from above the Kremlin for the first time in 74 years. It was the greatest and most bloodless strategic victory in the history of the world.

The very unsatisfactory meeting in Anchorage at the end of last week between Secretary of State Antony Blinken and the top diplomat Yang Jiechi, highlights the fact that we are now once again in a contest between Great Powers that will require a well-thought-out strategy to be conducted to success.

At strong intervals in Chinese history, the world has paid court to it, and it is the first Great Power to fall into decay and then recover that power. Though not a word or number it publishes can be believed, there is no doubt that the rise of China as an economic and technological power in the world in the last 40 years has been the greatest national development story in world history.

Yet it is far from invulnerable and Yang considerably overplayed his hand rhetorically in Anchorage. It is still 40 percent a command economy, has an aging and shrinking population, comparatively few natural resources, no institutions of any integrity whatsoever, is a controlled totalitarian state that is extremely corrupt and more of an imitative than an innovative society that has flourished chiefly on intimidation, bad faith, industrial espionage, and currency manipulation.

But it is a formidable challenger and one that must be replied to as were the previous threats: by the careful preparation of comprehensive plans of response designed to avoid direct confrontation but also to apply ultimately irresistible incentives on China to alter its behavior sufficiently to assure civilized coexistence and a sustainable level of international tension.

This stage will not be reached by unctuous assertions of moral superiority, such as secretary Blinken opened with, and even less by the hurt statements of America being “back” with which he replied to Yang’s outrageous charges against the United States of “slaughtering Blacks” and not being “in a position of strength.”

At least the acerbities may have spared the world embarrassment of listening to nonsense about climate change, which the Chinese regard as utter idiocy and hypocrisy and which is in any case not a strategic issue.

Secretary Blinken’s prior comments have indicated a much greater realization of the gravity of the Chinese challenge than his chief has expressed, and incites hope that he may now think along the lines necessary to devise a policy of strength and calculation that will provide the subtle restraint the international community will need to cope with China.

No country except the United States is capable of designing and executing such a policy. That is what Super Powers do; how they achieve their position and maintain it. And that is what this administration’s more talented predecessors have done to raise America to the position it attained at the end of the Cold War, which noisy elements in the present governing coalition wish to fritter away. That must not happen, and this should be the message Blinken brings back to Washington.