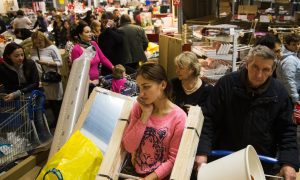 Reva Bhalla: Hello, my name is Reva Bhalla. And today I’m joined by George Friedman to discuss what appears to be a growing crisis for Russia. So George, we woke up to news of a ruble free fall today after a major interest rate hike. How should we be reading this situation?

George Friedman: Well, the financials reflect the underlying economy. There are three things affecting it. One is a cyclical downturn; there’s a lot of inefficiencies in the Russian economy, it was moving to a recession. Second, the sanctions. The sanctions have put a real crimp in their ability to borrow overseas and that’s had an effect. But the elephant, the giant here, is oil prices. Russia is heavily dependent on oil exports for its revenue. Oil prices tanked and they have hit Russia heavily. All of this sent it reeling.

The central bank decided for reasons not fully clear to anyone to dramatically raise interest rates. That, naturally, resulted in what they didn’t want: a sudden decline of the ruble. But we don’t know how permanent that decline is. We’ve seen in the past few hours something of a rally, so the markets tend to overreact. The first reaction was panic. Then there’s been a stabilization. We just can’t tell.

We can look at the ruble in the short run as sentiment of the market, but it really doesn’t tell us the underlying condition of the Russian economy. However, we have felt for quite a while that Putin is facing a dual crisis: the first crisis in the Ukraine, having really lost the Ukraine, and the second an economy that was in deep trouble. We certainly weren’t anticipating the central bank doing this, and we didn’t anticipate the ruble falling this hard, but that really isn’t the crisis. The crisis is inherent to the economy

Reva: And even if the ruble does stabilize a little bit, there’s a big question about the credibility of the central bank at this point in Russia. And when we look at just the contagion effect of a financial collapse in Russia, the Baltic states in particular are hit hard. Finland, Germany in absolute terms is the biggest exporter to Russia. So if we get into the heads of Merkel and Obama, at this point, what are they calculating in watching the Russian economy and assessing whether they’ve pushed the Russian bear a little too hard here.

George: Well, I don’t think they’re really looking at the sanctions as the major player. I think one thing they’re not doing is wondering about the credibility of the Central Bank of Russia because that’s market sentiment and that changes so rapidly. That really is a seismograph of what other people think, not reality. It is the Central Bank of Russia. This is the eighth-largest economy in the world. We have to be very careful talking about collapse.

There are crises like 2008 and the United States didn’t collapse, so we need to benchmark what this is. They’re in deep trouble structurally. Their dependence on oil is their Achilles’ heel, and a knife went through it when the price of oil started to fall. They’re certainly hurt now by the sanctions that make it very difficult to finance and refinance debt and things like that. And that’s someplace where even John Kerry has said, “You know, we don’t want to hurt the Russian people,” which was another way of saying we’re a little worried about what’s happening here.

But if you took the sanctions off, there’s still a question about whether banks would be willing to refinance. There’s still all sorts of other questions that have to be raised. The paradox here is that let’s assume that this goes as badly as it could, which I’m not saying it will. You might wind up with the same people who were doing sanctions before trying to figure out some sort of IMF bailout that they’d finance for the Russians. Russia, you know, when you talk about too big to fail, this is not Russia of the 1990s. This is too big to fail.

Reva: Right. And so, what’s interesting too is that even when we look at sanctions and as Putin is calculating his timeline, the EU sanctions technically expire — the big ones that matter in energy and financial — in July. So theoretically, if Russia could buy enough time, play nice on certain issues like Ukraine, then perhaps they could manage that economic pressure.

George: Possibly. The sanctions hit in a hard place. The ability of the Russians to borrow — it’s not so much they need to borrow now, they need to refinance their existing loans. But a lot of Western banks have been part of that, and those are the banks that are going to swallow it. Right now, everything turns to political questions that we raised before: Can Putin survive?

This crisis raises the question about the judgment of Putin. So far it has not hit his popularity in Russia but we haven’t had any polls since this happened. When I was there recently, people were saying, “You know, we really don’t feel the decline — unless we want to travel overseas we haven’t felt it before.” And as we saw in the 2008 crisis, there is a huge distinction between financial crisis and people’s experience of it. That comes later.

So what we really have to focus on right now is to understand why the Russians decided to suddenly raise their interest rates so high. And there were all sorts of theories circulating around, like they were trying to refinance Rosneft in some way. Mostly those who talk don’t know, and I suspect nobody quite understands the decision-making process that led to that.

And we really do have to ask the question whether this ruble decline, which was really triggered by oil, is going to sustain itself. We saw a small rally into a decline. That may not turn out to be a problem. The Russians may have enough resources to handle this. But then it really becomes a question of how much confidence in the long run do people have in Putin’s ability to handle it.

Reva: And so based on your discussions in Moscow, what was your read on that situation? Do you think that the Kremlin will have the internal stability to ride through this crisis and manage a new pressure to come from the U.S.

George: In looking at it, I got the feeling that they were not feeling nearly as much pain as the West would have liked them to have felt. There wasn’t bravado when they said, “Look, we’re going into a bad period. Russia has gone into bad periods before. This is not nearly as bad as the 1990s. We’re certainly not going to submit to the West to avoid that.”

And they also said, “The sanctions are not the thing that’s really hurting us. I mean, it doesn’t do us any good, but there are other things that are really hammering us, like oil prices.” And there’s nothing the West can do about that. So that was my sense before this crisis. And I left there on Friday and this happened today. And so I don’t know how it’s changed. I’ve tried to reach some people; they have generally said, “I’m real busy; I’ll get back to you sometime later.” I don’t think anybody can really unscramble what’s happening at the moment.

Reva: Well, we’ll have to unscramble the forecast, for our upcoming annual forecast soon enough. But our eyes will be on the ruble until then. Thank you, George.