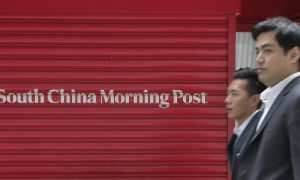 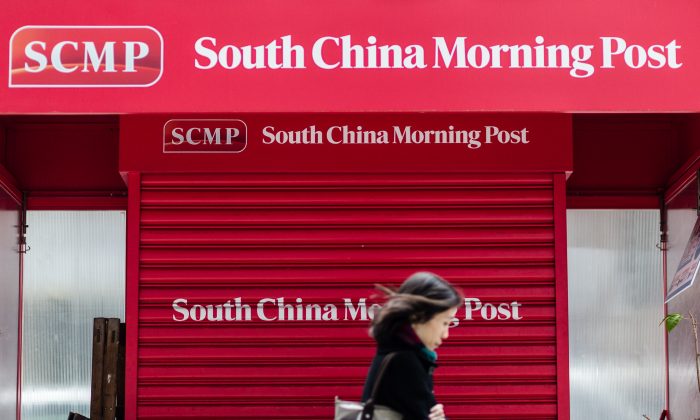 A pedestrian walks past a closed newsstand designed with the logo of the ‘South China Morning Post’ (SCMP) in Hong Kong on Dec. 12, 2015, following its acquisition by Chinese Internet giant Alibaba of the English-language newspaper. (Anthony Wallace/AFP/Getty Images)
China

On Dec. 14, SCMP Group Limited announced that it would sell SCMP and other media assets, including magazines, recruitment, outdoor media, events, conferences, education, and digital media businesses, to the Alibaba Group for HK $2.06 billion (US $266 million), all cash.

Before this, other companies such as ATV, Hong Kong Daily News, Sing Pao, TVB, Taiwan Eastern Broadcasting Co., Ltd., and EBC had already changed hands or closed down. Some analysts believe the Jiang Zemin faction of the Chinese Communist Party (CCP) had a large-scale media takeover a few years ago, and now the cutoff of capital inflow from the Jiang faction has led to this reshuffling of ownership in the Hong Kong and Taiwan media.

SCMP Group said it expected to record a gain of around HK $1.426 billion from the asset sale.

According to financial analysts who are familiar with media stocks, SCMP has been in a financial surplus for the past few years, and its credibility rating is relatively high in the Hong Kong media sector. When Alibaba founder Jack Ma spent just over HK$2 billion to buy the newspaper, some analysts believe he could be considered to have found a treasure.

It has been said that the Hong Kong media industry was in recession. The Malaysian tycoon Kuok family had always planned to sell the media business, and Ma intends to establish a media empire. The good timing of both parties led to the acquisition.

This is the 25th acquisition of a media business by Alibaba and its first media business outside mainland China. The outside world has expressed concern about the future of SCMP and its editorial policy.

To address this concern, Alibaba Group vice executive president Joseph Tsai stated that they would ensure the editorial independence of the newspaper. The group executives also announced that they would make current paid content on the website free, but they indicated that future reports would be focused on China.

Sources said the two parties began the negotiations last year. In his early response to the negotiation, Ma said the acquisition of the media business was a reasonable move.

Established in 1903, SCMP is Hong Kong’s largest English newspaper. Its readers are mainly from political and business sectors. It has been regarded as one of Hong Kong’s most trusted newspapers and has considerable influence.

In 1971, SCMP was listed on the Hong Kong Stock Exchange. In 1987, it was privatized by News Corporation, owned by the international media tycoon Rupert Murdoch, and relisted in 1990.

The British Financial Times gave an analysis in an article in its online Chinese version, stating that it was a known secret that the Kuok family did not have a passion for the media business.

In terms of business share, SCMP is really insignificant in the Kuok family’s business empire, the article added.

The article referred to gossip that Robert Kuok had acquired SCMP on instructions from Beijing. It speculated that in the new political environment in China, the Kuok family did not need to worry about a media company that was not a core part of its business.

The article stated that for the Kuok family, with the frequent loss of senior editorial staff in recent years and the merging of print media and the Internet still only half accomplished, withdrawing from the falling newspaper industry was very normal.

In addition, while facing a divided Hong Kong, it is a smart choice to maintain an appropriate distance from politics, at least publicly, according to the article.

Kuok and the CCP

Robert Kuok, 82, is a business tycoon who maintains a low profile. He has very few appearances and has made few comments to the media.

This caused a reaction from the Hong Kong business sector. Li announced earlier this year that he would shift registration of his conglomerate Cheung Kong overseas, and Kuok sold SCMP after holding it for 22 years.

Kuok has always been accused of having close ties with Beijing. His business empire covers sugar, hotels, real estate, shipping, insurance, media, railway stations, docks, and many other industries.

According to a revelation from China Economic Weekly, as early as 1973 Robert Kuok was receiving secret instructions from officials of the Chinese Ministry of Foreign Trade and executives of the China Resources Company. The instructions asked him to buy sugar and get involved in future trade in Brazil on behalf of China; therefore he was regarded as a “top red businessman.”

After the 1989 Tiananmen Square massacre, the Western world began sanctions against China, and foreign investors abandoned the Chinese market. Kuok, however, increased projects and investments in China.

According to China Economic Weekly, in August that year, CCP leader Jiang Zemin invited the Kuok family to the Diaoyutai State Guesthouse for dinner to express his gratitude. The article stated that Kuok also recommended that his golf friend, Li Ka-shing, invest in China.

In 1993, the CCP was still under Jiang’s control. Kuok, who had never been in the media business, spent a huge amount of money on the purchase of SCMP.

Paul Mooney, the former SCMP correspondent in Beijing, told the media there were rumors that Beijing would not like to see SCMP get into the hands of foreigners, so it was recommended that Kuok buy the business.

Since Kuok purchased SCMP in 1993, the newspaper has been increasingly criticized for adopting a pro-Beijing stance. Multiple editors have been replaced, including columnist Danny Gittings, correspondent Jasper Becker stationed in Beijing, and Chinese version editor Willy Wo-Lap Lam.

Becker, who used to be the director of the Beijing Office, revealed that when reporting on sensitive issues such as Falun Gong, Tibet, and anti-Chinese government activities, SCMP could only use other agencies’ news and could not have their own exclusive report coverage. So the “one country, two systems” and “50 years without change” policies are only empty talk, according to Becker.

In November this year, SCMP former editor-in-chief Wang Xiangwei had a low-profile resignation. He was a member of the Chinese People’s Political Consultative Conference (CPPCC) of Jilin Province.

In June 2012, Wang was widely criticized for self-censorship when reporting on Tiananmen Square dissident Li Wangyang’s suspicious death. It was reported that the death of Li Wangyang was on the order of former Politics and Law Committee head Zhou Yongkang and former Central Political and Law Commission secretary-general Zhou Benshun.

On June 12 that year, SCMP had an exclusive interview with Snowden and published a series of reports that caused a sensation. At that time, Hong Kong media disclosed that the consortium behind Snowden’s former employer was the Carlyle Group.