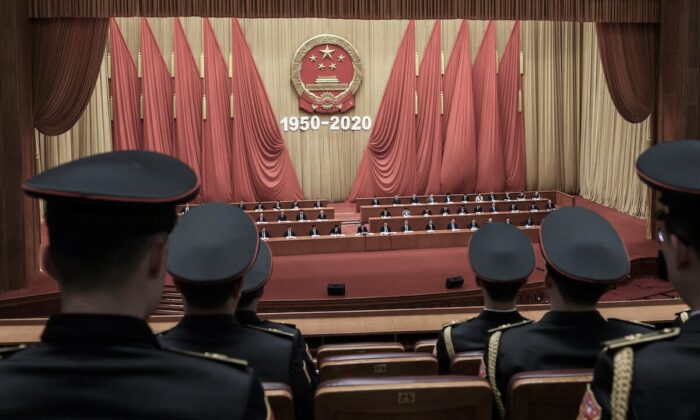 People's Liberation Army band members watch as Chinese leader Xi Jinping (C) and senior members attend a ceremony marking the 70th anniversary of China's entry into the Korean War, at the Great Hall of the People in Beijing, on Oct. 23, 2020. (Kevin Frayer/Getty Images)
Thinking About China

Analysts Predict the Outcome of the CCP’s Upcoming National Congress

The Chinese Communist Party (CCP) has announced that on Oct. 16 it could hold its 20th National Congress, an important political event that will determine the power layout of the CCP for the next five years. Whether the CCP’s top leader Xi Jinping will continue his rule into a third term has become the focus of attention. Analysts provided different views what to expect from the upcoming congress.

U.S.-based current affairs commentator Chen Pokong said in his YouTube program on Aug. 31 that the National Congress will be held in October instead of November, which means the reorganization of power and internal struggles over different ideologies within the CCP’s top circle have been settled.

On the question of whether Xi will stay or leave his post, Chen believes that Xi may enter a state of semi-retirement.

“The so-called Xi Jinping Thought was mentioned twice in the regime’s mouthpiece media in the past two days, stressing ‘the significance of profoundly understanding the Two Establishments. That is, establishing the core position of Xi in the CCP and the guiding position of the so-called Xi Jinping Thought,” Chen explained. “It means that Xi will not give up all his power; instead, he could enter a state of semi-retirement.”

Chen believes that Xi could retain one or two posts, and possibly extend the term of his military commission chairmanship by two years, and then retire in a gradual and stealthy manner to save face while ensuring his own safety and the ascendancy of his own people.

Chen also noted that Chinese state media are now giving more air time to Premier Li Keqiang, while in the past when the CCP held commendation meetings, Li was always ostracized. For instance, when the CCP held a ceremony commending the public security system in May this year, Li also attended the ceremony and walked in immediately following Xi, which was a rare scenario. The same situation occurred again in an August commending conference for public servants.

“This implies that Li Keqiang may be in transition to take over some key position from Xi, such as general secretary of the CCP, or chairman of China,” Chen said.

He added that if his prediction becomes reality, Xi’s semi-retirement and Li’s ascension to the top is a compromising solution for the CCP its political turmoil, China’s economic downturn, the recession in foreign trade, the withdrawal of foreign investment, and the unprecedented isolation of the CCP by the international community.

Hong Kong-based writer Ngan Shun-kau penned a commentary for the Chinese-language Epoch Times on Sept. 2, saying that he expects Beijing to largely keep its current direction and policies.

“There is already an internal conclusion on whether Xi Jinping will be reelected or not, it’s just that the outsiders don’t know. But we can predict that the outcome [from the 20th National Conference] will be one of two scenarios. One is that even if Xi is reelected, his power will be weakened, and the other is that even if he is to step down, he will not be fully retired, but half-retired,” Ngan wrote.

Also, the internal decision on whether to adjust the CCP’s domestic and foreign policies has already been made, it’s just that outsiders don’t know. But we can predict it’s going to be one of two scenarios, one of which is that even if any adjustment to its policies is to be made, it will only be a minor repair. The other is that even if the CCP decides to continue its current policies, it will not add fuel to the fire, Ngan continued.

“These decisions are based on the CCP’s top leaders’ judgment on the current situation,” he wrote. “At the diplomatic level, they have reached common ground that China–U.S. relations won’t be reversed.

“A couple of months ago, the CCP’s envoy Wu Hongbo visited Europe to find out the responses of European leaders, and the result was pretty bad: the EU would not make peace with the CCP behind the United States’ back, which eliminated the CCP’s last chance to drive a wedge between the EU and the United States. At this point, the international situation is one of confrontation between China and the West. Regardless of how big a concession the CCP is willing to make, the democratic countries will not easily forgive it. So the CCP will have to fight to the end.”

According to Ngan, the CCP is now facing the worst situation since it came to power. Be it domestic or foreign affairs, it has no merits at all and there is no way out in sight. The key is that CCP officials are on the same boat and the boat cannot sink. As long as the boat remains afloat, this leaky boat will struggle to hold up to the end.