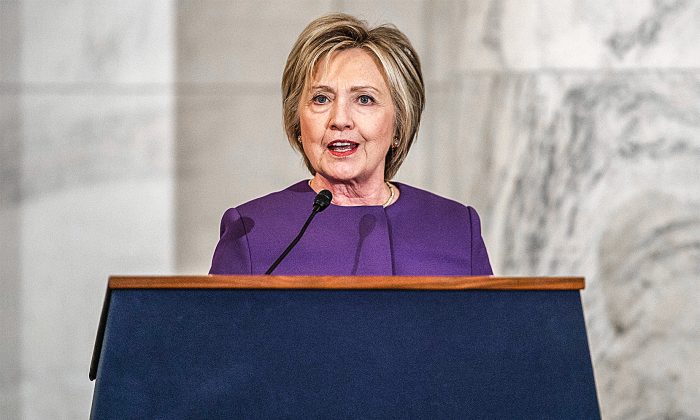 The Truth About Fake News

Hillary Clinton is warning about an epidemic of fake news, but what is it really?

Hillary Clinton issued a warning about the dangers of “fake news,” calling it a threat to democracy.

“It’s now clear that so-called fake news can have real world consequences,” she said, adding that it is “a danger that must be addressed and addressed quickly.”

“It’s imperative that leaders in both the private sector and the public sector step up to protect our democracy and innocent lives.”

Clinton did not elaborate on what “fake news” actually entails.

“There have been claims that it swayed the election, and we don’t think it swayed the election,” Sandberg said on the “Today” show on Dec. 8. “But we take that responsibility really seriously. And we’re looking at things, like working with third parties, helping to label false news, doing the things we can do to make it clearer what’s a hoax on Facebook.”

Recent reports have noted that fake news websites based in Macedonia have been pushing out deliberately fabricated news stories to generate traffic and make money. Usually, they would push pro-Donald Trump articles targeted at conservatives.

While fake news farms do exist, a lot more is getting caught in the crosshairs than some blatantly untrue stories written by opportunistic teens in faraway countries.

“The Americans loved our stories and we make money from them,” a 19-year-old fake news creator in Macedonia told the BBC. “Who cares if they are true or false?”

While fake news farms do exist, a lot more is getting caught in the crosshairs than some blatantly untrue stories written by opportunistic teens in faraway countries.

Critics of the “fake news epidemic” narrative say that “fake news” is a poorly defined label at best and a propaganda tool at worst—and that it’s being used to discredit alternative media websites publishing views deemed heterodox.

Line in the Sand

To be sure, there have always been online hoaxes, at least since the early days of the internet when BBSes were popular. Celebrity death hoaxes seem to be the most popular. (How many times have we seen articles claiming “Paul McCartney is dead” or “Charlie Sheen is dead”?)

But with the advent of Facebook and the competition for clicks, a host of bad practices have proliferated.

The question then arises: Should these articles be described as “fake” or simply “bad journalism”?

As the narrative started gaining steam, hoax-debunking website Snopes wrote a rare op-ed titled, “We Have a Bad News Problem, Not a Fake News Problem,” trying to draw a clear line in the sand between the two.

The problem, as described by Snopes founder David Mikkelson, is that “fake news” has been made synonymous with evincing a political slant.

So while liberals and conservatives alike may accuse media on the other side of the spectrum of being biased, “we would be entering perilous territory if we started tagging every news source with a strong partisan political viewpoint as ‘fake news,'” wrote Mikkelson.

With the “fake news” whip now being wielded so wildly, legacy media have felt its sting too.

Major media reporting on the topic have attracted comments on their Facebook pages accusing them of being purveyors of “fake news” themselves, with all sorts of examples being cited, including the decision to report on “weapons of mass destruction” that led to the 2003 Iraq War; Dan Rather’s false reporting on George W. Bush in 2004 (which got him fired); and Rolling Stone’s discredited campus sexual assault story.

A widely criticized article by The Washington Post cited research by an organization called PropOrNot “showing the startling reach and effectiveness of Russian propaganda campaigns.”

PropOrNot (short for “Is It Propaganda or Not?”) was described by the Post as “a nonpartisan collection of researchers with foreign policy, military, and technology backgrounds.”

While the article did not name the accused websites directly, it described in detail the analytics tools PropOrNot used to determine that over 200 publishers (many right-leaning) including Drudge Report, ZeroHedge, and Infowars were “routine peddlers of Russian propaganda during the election season.”

Enough of a backlash ensued that PropOrNot removed some websites from its list, and the Post had to publish an editor’s note defending itself.

The note in part read, “The Post, which did not name any of the sites, does not itself vouch for the validity of PropOrNot’s findings regarding any individual media outlet, nor did the article purport to do so.” It also noted that PropOrNot “insists on public anonymity.”

Pulitzer Prize-winning journalist Glenn Greenwald (who led The Guardian’s reporting on Edward Snowden) and Ben Norton, writing for The Intercept, described the Post’s report as being “rife with obviously reckless and unproven allegations.”

Another significant critic of the story was The New Yorker’s Adrian Chen, who slammed PropOrNot’s apparently scientific methods as being incredibly messy and noted that it was next to impossible to verify the claims.

Chen, evoking warnings of an Orwellian future, wrote that while it’s true that harmful fake news did spread through social media during the campaign, “the prospect of legitimate dissenting voices being labeled fake news or Russian propaganda by mysterious groups of ex-government employees, with the help of a national newspaper, is even scarier.”

Now that the specter of “fake news” hangs over the media world, what happens next could be scary indeed. Most would agree that mischievous teens in Macedonia and malicious crafters of disinformation should be stopped. But where does the line get drawn?

And if there’s any silver lining, it’s a chance for us all to think hard about that line in the sand. The sharper the distinction is between good journalism and shoddy journalism, the easier it will be to label what’s fake and what’s true.