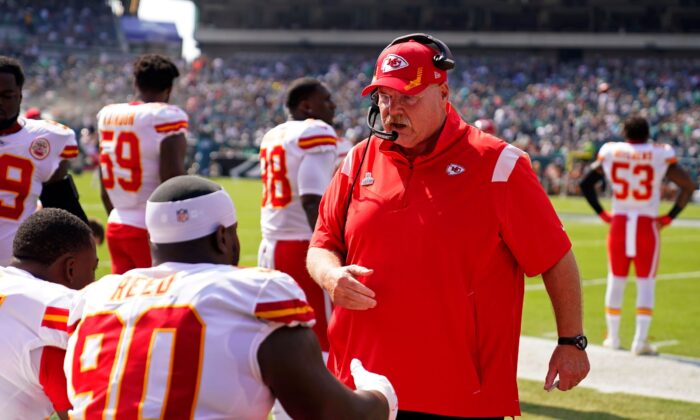 PHILADELPHIA—Andy Reid kicked off Homecoming Sunday with a record-setting win in Philadelphia, and Tom Brady finished it with one of his own against Bill Belichick in New England.

The road to victory was easier for Reid.

The 63-year-old coach watched Patrick Mahomes throw five touchdown passes to lead the high-powered Kansas City Chiefs to a 42–30 win over the Eagles. Reid became the first coach in NFL history to win 100 games with two teams, reaching that milestone against his old club.

Brady and the Tampa Bay Buccaneers had to grind out a 19–17 win over the Patriots that was secured when Nick Folk hit the left upright on a 56-yard field goal attempt in the closing seconds on a rain-soaked night. Earlier, Brady became the NFL’s all-time leader in yards passing, breaking Drew Brees’ mark at Gillette Stadium, where the seven-time Super Bowl champion played his first 20 seasons.

Cleveland Browns coach Kevin Stefanski also had a triumphant return, earning a 14–7 win in Minnesota, where he spent 14 seasons as an assistant.

Reid already came back to Philadelphia as a visitor in 2013, so this trip wasn’t as emotional for him.

“I’m pretty good with it,” he said with a smile. “You want me to cry up here? I don’t have anything more to say.”

Reid joked about eating cheesesteaks and warned the media and fans to be patient with Eagles rookie coach Nick Sirianni.

“Just keep doing what you’re doing, man, and you’re going to be fine,” Reid said of his advice for Sirianni. “He’s got a strong personality, a strong kid, man. And you need that here. You guys can be a little rough. But you got to have that and keep moving. You don’t let things grab you and take you down.”

Reid’s players badly wanted to get Big Red that 100th win in Philadelphia, where he won more games than any coach in Eagles history.

“It’s awesome,” said Tyreek Hill, who had three touchdown catches and 186 yards receiving. “Seeing him in the locker room fired up is surreal, man. As a kid, I used to watch TV and see Coach Reid coaching in Philadelphia. I used to have dreams and aspirations of playing in the NFL, and now I’m actually playing for one of the greatest coaches of all time.”

Reid led Philadelphia to five NFC championship games, winning only one. The Eagles lost their lone Super Bowl appearance under Reid to Brady and Belichick following the 2004 season. But Reid finally hoisted that Vince Lombardi Trophy two years ago and guided the Chiefs back to the Super Bowl last season, losing to Brady and the Buccaneers.

“I think it’s special to him for sure being in Philadelphia,” Mahomes said. “He became Andy Reid in a sense in Philadelphia. And to be able to go to Kansas City and build what he’s built here, and get that 100th win in Philadelphia—and obviously, he’s going to keep on going, he has a lot of dreams for this season—but he’ll definitely take in this moment for a second at least.”

Mahomes later added: “No offense to Philly, I’m glad they let him go and he’s here coaching us in Kansas City.”

For the 44-year-old Brady, going back home was an emotional experience throughout the week even before he jogged onto the field in warmups to “Brady, Brady, Brady!” chants.

“That was pretty cool,” he said. “It’s been my home for 20 years. I have the best memories. My kids were born here. It’s just a great town, a great city, a great area. I love it up here. I have so many people I have relationships with, but this was about this team coming up here to win. This wasn’t about one player. This was about our entire team going on the road, beating a good team.”

Brady kept his emotions in check during the game, facing a defense that knows him better than anyone. He completed only 51.1 percent of his passes and didn’t throw any touchdown passes but left victorious, as usual.

“I was just trying to keep my poise,” he said. “I showed up to the stadium and I knew what we were gonna be dealing with, a really good football team. They were well-prepared. I thought they made a lot of good plays. We had too many penalties that held us back. Good to get a win on the road.”

Reid’s Chiefs, Brady’s Buccaneers, and Stefanski’s Browns were among nine road teams that won in Week 4. The New Orleans Saints were among the home losers in their first game in the Superdome since Hurricane Ida forced them out of town. They blew an 11-point lead in the fourth quarter and lost to the previously winless New York Giants 27–21 in overtime.