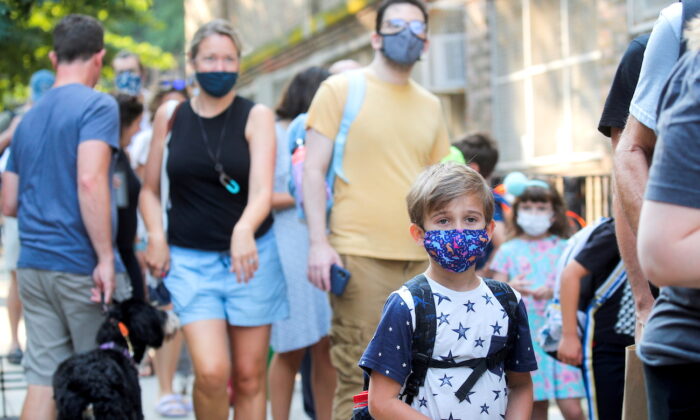 1.5 Million Parents Could Drop Out of Workforce Amid Biden Child Tax Benefit

According to a recent analysis (pdf) from University of Chicago economist Bruce Meyer, about 2.6 percent of parents could drop out of the workforce after being given monthly entitlement checks based on family income.

Under the American Rescue Plan passed in March, lawmakers expanded the CTC from $2,000 to as much as $3,600 per child. Half of the CTC funds were sent to households or deposited into bank accounts in the form of monthly checks from July to December. Parents aren’t required to work to receive the CTC and its monthly payments.

Meyer explained that some parents could choose to quit working because of the payments and if they can gather enough money from public assistance and family and friends.

“The proposed expansion would get rid of the strong work incentives under the prior CTC; it would essentially eliminate a tax credit that encouraged work and replace it with something that discourages work,” Meyer told CBS MoneyWatch. “In the end, those at the bottom may not be better off.”

He added that it would be “a good idea” to insert a work requirement. The economist endorsed Sen. Joe Manchin’s (D-W.Va.) proposal for an employment prerequisite.

As part of the previous CTC, beneficiaries needed to work to receive the full credit.

Still, Meyer anticipates that the tax credit, even if 1.5 million parents were to quit their jobs, would alleviate child poverty. He projected that child poverty could decline by 22 percent because of the payments.

Others dispute his suggestion that more than 1 million working parents would be submitting their letters of resignation.

Researchers at Columbia University’s Center on Poverty and Social Policy argued in a recent paper (pdf) that the data show that CTC payments haven’t led to a noticeable effect on payrolls or the labor force participation rate.

“Real-world data in the immediate wake of the CTC expansion do not support claims that the elimination of the phase-in portion of the CTC has discouraged work among parents in any meaningful way,” the researchers stated.

Speaking to reporters aboard Air Force One on Dec. 17, White House press secretary Jen Psaki stated that President Joe Biden might double the CTC payments in February if the $1.75 trillion social-spending and climate change plan is enacted in January.

“If we get it done in January, we’ve talked to Treasury officials and others about doing double payments in February as an option,” she told the press. “The president wants to see this move forward. It’s a priority for him as soon as Congress returns.”

While the administration and Democratic lawmakers want to extend the payments as part of the legislative push, the massive spending bill isn’t guaranteed to pass, as Manchin has said he can’t support the measure in its current form. In addition, many congressional Democrats have conceded that they don’t have a considerable backup plan to maintain the monthly payments prior to their expiration.

Ultimately, experts say that the United States has, for many decades, refrained from offering variations of basic income similar to the CTC payments, so there are still many unknowns and uncertainties.

For many parents, it might be economically beneficial to resign from their positions, since day care is costly.

It’s no secret that the cost of child care is expensive. According to the Bureau of Labor Statistics (BLS), the price of day care and preschool advanced by 2.7 percent year-over-year in November.

Families nationwide spend an average of $8,355 per child for year-round child care, with some estimates going as high as $16,000.

“Monthly child-care costs can feel like an extra mortgage payment, especially if you live in an expensive area or have more than one kid,” Ted Rossman, Bankrate’s senior industry analyst, said in a statement.

Biden’s American Families Plan includes proposals to diminish child care costs. For households earning less than 1.5 times their state median income levels, they wouldn’t pay for child care. Others earning above that level would pay no more than 7 percent of their income on child care.

The Latest From ‘The Great Resignation’

Employers are coming across a myriad of challenges in this economy, and labor has been one of the chief obstacles in this market.

According to the BLS, about 4.2 million Americans quit their jobs in October, bringing the total number of people leaving employment to nearly 39 million in the first 10 months of 2021. It’s an exodus that some are calling “The Great Resignation.”

It’s expected that 2021 will set a record if workers leave their jobs at comparable levels in November and December.

The so-called quit rate for public- and private-sector workers is high for many reasons. Many people are quitting because of concerns over contracting the coronavirus, being unable to find or afford care for their children or aging parents, or they have located employment opportunities with better compensation.

Indeed, the number of job openings in the United States increased to almost 11 million in October, with the figure concentrated in education, hotels, manufacturing, and restaurants.

Experts contend that the labor market pendulum has swung in the direction of the workers. As a result, companies have been raising wages, expanding their perks and benefits, and introducing a wide range of bonuses to attract talent.

When businesses can’t find applicants, employers are doing everything they can to retain their current staff members. This, market analysts note, is part of the reason initial jobless claims have hovered around a five-decade low. Businesses are too frightened to terminate their employees in this environment.

According to a study from the Conference Board think tank, private firms are allocating 3.9 percent of their payroll budgets to wage increases in 2022, the biggest increase since 2008.

The report noted a unique trend as companies try to limit record turnover rates. Many of the salary increases will be given to present employees.

Meanwhile, the Conference Board survey reported that 39 percent of businesses revealed they’re boosting wages to keep pace with surging inflation.

“The rapid increase in wages and inflation are forcing businesses to make important decisions regarding their approach to salaries, recruiting, and retention,” said Conference Board chief economist Gad Levanon in the report. “In particular, companies are likely to raise wages aggressively for their current employees or they will risk even lower retention rates. After being a non-issue in wage determination for several decades, sizable cost of living adjustments may be making a comeback.”

“At the same time, business leaders will have to decide how much they will pass the additional labor costs to consumers through price increases. That decision, relative to competitors’ strategies, could impact companies’ market shares.”

This development could persist heading into the next calendar year. A recent CareerArc/Harris Poll survey discovered that 23 percent of employed Americans intend to quit their jobs over the next 12 months as a considerable number desire better working conditions and want higher pay.

“All of these forces should gradually resolve the current excess demand for labor,” Kelly stated in a research note. “However, barring a recession, this process could take years.”

Fed Worried About Wage Threat in 2022

This month, many experts, from Wall Street analysts to top economic policymakers, have sounded the alarm about one of the biggest threats in the economy next year: A “wages push” by workers in 2022 that could contribute to higher inflationary pressures.

While he conceded his concern about 39-year-high inflation, Federal Reserve Chair Jerome Powell explained that ballooning wages are “both larger in [their] effect on inflation and more persistent.”

He revealed that one of the notable factors determining a rate hike was the Employment Cost Index (ECI) that was published in October. The report discovered that hourly labor costs climbed at a “very high” pace of 5.7 percent over the past three months.

“If you had something where real wages were persistently above productivity growth, that puts upward pressure on firms, and they raise prices,” Powell said. “We don’t see that yet. But with the kind of hot labor market readings—wages we’re seeing, it’s something that we’re watching.”

“You know, usually, in every other expansion, it’s that there aren’t enough jobs and people can’t find jobs,” he said. “What we need is another long expansion, like the ones we have been having over the last 40 years.”

The head of the U.S. central bank acknowledged that many Americans don’t want to return to the workforce because of medical concerns, the paucity of child care, and nobody to look after seniors.

“The ratio of job openings, for example, to vacancies is at all-time highs, quits—the wages, all those things are even hotter,” he said.