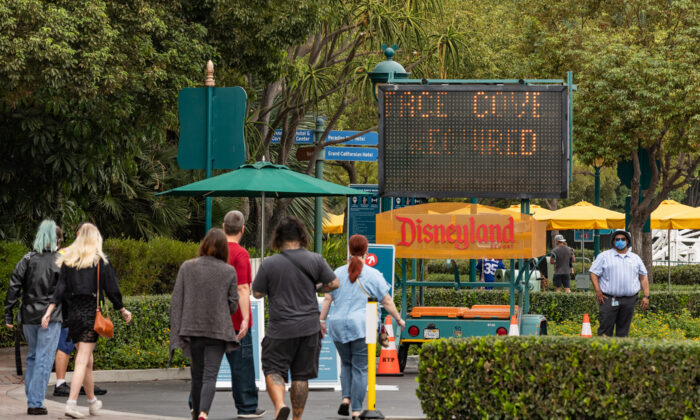 Anaheim to Consider 2 Percent Gate Tax for Disneyland, Other Parks

Visiting Disneyland could soon cost more under a proposed plan to add 2 percent gate tax to each park ticket.

If passed, park goers would pay an extra $1.60 to visit Disneyland if paying for the standard $79 day pass.

Moreno, who is termed-out and will not be running for re-election, said at a June 21 council meeting he wanted to propose instituting the entertainment tax on admissions to Disneyland Resort, Anaheim Stadium, and the Honda Center, home of the Anaheim Ducks.

“Given how much we have struggled to nickel and dime to support our seniors, … we really need revenues. Given the burden rate of our staff and the personnel we need for a city of our size, we need more revenue,” Moreno told the council June 21. “I’d like to pursue that and allow the people to vote on whether we have a tax or not in our city at the gate.”

If approved, the tax measure would go before voters on the Nov. 8 ballot.

The tax could generate from $55 million to $82 million each year for the city’s general fund account to fund police, fire, emergency response, street maintenance, and community services, according to city staff.

The city’s lease with the Angels baseball team for the Anaheim Stadium might not allow for the gate tax there, however, according to city staff.

The city’s current lease agreement with the Angels states that, if the city imposes, levies, or assesses any ticket, admission, parking or other tax or fee based upon revenues derived from the team’s revenues or operations at the stadium or parking area, the Angels shall receive a credit for its lease payment obligations to the city, staff reported.

In 2020, a former councilor proposed a $1-per-ticket gate tax, but the council declined to put the plan on the agenda at the time.

The tax measure requires five of the six remaining councilors to approve it. The council dropped from seven to six members in May when Mayor Harry Sidhu resigned following an FBI investigation into alleged corruption.

Mayor Pro Tem Trevor O’Neil is opposed to the proposal.

“Increasing the already high tax burden on visitors runs the risk of negatively impacting tourism and the resulting economic impact for our city,” he told the LA Times in a statement July 18. “And, this proposal would not only apply to visitors but to our own residents as well who enjoy the many entertainment options in our city.”

A representative for the Walt Disney Co. did not return a request for comment by press time.