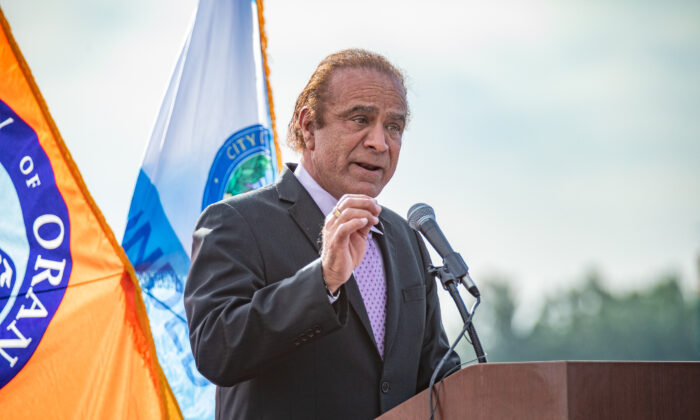 ANAHEIM, Calif.—Anaheim Mayor Harry Sidhu has resigned effective May 24, according to his attorney.

Sidhu’s attorney pushed back on last week’s allegations of corruption that emerged in an affidavit issued by the FBI about negotiations with the sale of Angel Stadium before announcing Sidhu’s resignation.

“In order to continue to act in the best interests of Anaheim and allow this great City to move forward without distraction, Harry Sidhu has resigned from his post as Mayor effective May 24,” his attorney Paul Meyer said in a statement.

All of the city’s councilors have called for Sidhu’s resignation.

Sidhu’s attorney said a fair and thorough investigation will prove that the mayor did not give secret information to the baseball team’s owner during negotiations of the $320 million sale in hopes of later receiving a political campaign contribution.

“His unwavering goal from the start has been to keep the Angels in Anaheim, so that [this] vibrant social and economic relationship would continue,” Meyer said.

“I believe it was a good decision that former Mayor Sidhu has taken to resign after hearing from his colleagues and the community at large to resign the position as mayor,” Moreno said. “That said, I hope the public and the media keep their eye on the ball. The resignation of Mayor Sidhu, given the FBI probe, the transcripts, the indictment, and the affidavits, it is very clear that he was not alone in this corrupt culture infected by money, greed, and political ambitions.”

Following Sidhu’s resignation announcement, the city said the selection of a new mayor may be up to voters in November.

“With Sidhu stepping down, a vacancy would be addressed by the City Council in consultation with city attorney, city clerk, Anaheim’s charter and state law,” the city said in a statement.

Anaheim’s charter calls for a vacancy to be filled by a council appointment within 60 days. If the council is unable to appoint a new mayor after 60 days, a special election is required, according to the statement.

“Given proximity to November’s election, where the mayor’s seat is set to go before voters, an election to fill the seat could be held at the same time,” the city said.

The mayor was appointed in 2019 as a member of the city’s stadium sale negotiating group.

The deal hit snags in the past three years, including a lawsuit by homeless advocates and a state violation issued by the Department of Housing and Community Development.

The lawsuit claimed the city violated the state’s open meetings act, or the Brown Act. A superior court judge ruled, however, it had not.

The state housing department claimed the city needed to meet the Surplus Land Act requirements that included first offering the land to affordable housing developers. The violation was settled in a stipulated agreement last month after negotiations between Anaheim and the state Attorney General.

Anaheim was in the midst of moving forward with the stadium sale to team owner Arte Moreno’s development company SRB Management. However, two FBI affidavits outlining possible corruption by Sidhu prompted the state Attorney General’s office and the housing department to seek a court-ordered postponement of the deal, which was granted May 17.

Sidhu’s attorney disputed the allegations in the FBI probe.

“The negotiations followed accepted lawful practices used in all major business negotiations,” Meyer said. “No closed session material, no secret information, was disclosed by Mayor Sidhu. The government affidavit confirms that Harry never asked for a political campaign contribution that was linked in any way to the negotiation process.”

According to the FBI affidavit, Sidhu sought $1 million in campaign donations to finalize the deal. Sidhu has not been charged or indicted.

The Anaheim City Council expects to discuss the future of the stadium sale at its regular meeting May 24.

Moreno, the councilman, said he hoped the public and media would continue asking questions about the issue “so that they are able to learn about the extent of the culture of a cabal and what can only be called a shadow government.”

“Mayor Sidhu’s resignation is necessary but not sufficient,” Moreno said. “We must continue investigating how deep this cabal ran and who participated and collaborated in allowing this culture to thrive.”

Moreno said the Angel Stadium deal was a bad deal from the beginning.

“We have to look at it from an ethical perspective,” Moreno said. “I’m not convinced the deal was legitimate at this point.”

The city council faces a deadline set by the team’s ownership to approve the sale by June 14.

Moreno said the city council has several decisions to make at the meeting, which could include continuing or accelerating the deal, canceling the sale, or placing a hold on it.

Orange County Supervisor Katrina Foley, who has also called for Sidhu to resign, according to local media, said she wants to audit county contracts with Angels Baseball and the Anaheim Chamber of Commerce.

I just learned that Sidhu resigned. I still want the audit. https://t.co/pCLfi41P9D

Supervisor Don Wagner told The Epoch Times Sidhu’s resignation was the right move as it “frees Harry to focus on the legal issues, and more importantly, the City of Anaheim to move forward for all its residents.”

Brandon Drey and Drew Van Voorhis contributed to this report.