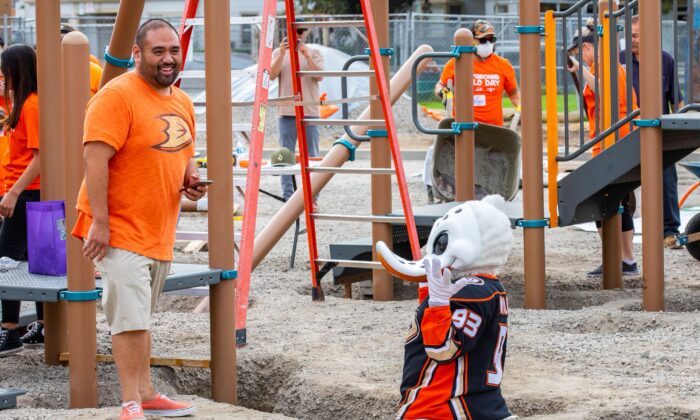 “The interest from people wanting to volunteer has been great,” the city’s Senior Communications Specialist Erin Ryan told The Epoch Times.

The volunteers worked alongside Ducks’ ice hockey players, coaches, and staff to build the 4,300-square-foot playground in one day.

Located in the center of Anaheim, the new playground is a part of Center Greens, a 3.5-acre park next to the city’s youth center, senior center, City Hall, and the Downtown Anaheim Community Center.

Ryan said the park “rounds out a variety of program offerings and activities for everyone in the community” thanks to its location, which also includes a skatepark and a basketball court.

The project was funded by Henry and Susan Samueli—who own the Anaheim Ducks—with coordination between the city and KABOOM!, a nonprofit that works with communities to build kid-designed play spaces.

“The [Anaheim Ducks] is trying to be a leader in our community by giving back to it,” the team’s head coach Dallas Eakins told The Epoch Times while packing dirt for playground equipment placement.

“It’s just not about our players on the team or coaches,” he said. “It’s about our marketing people, our ticketing people, and our PR people all coming together with one common goal, and I think this is unbelievable team building.”

The playground also has a bridge, monkey bars, a circular spider web climber, spinners, bucket swings, a companion swing, a zip line, and a teeter-totter, as well as game and musical panels.

This is the first playground to be sponsored by the Ducks and comes in time to help kick off the team’s 2022–23 season starting Oct. 12—when the team plays against the Seattle Kraken at Honda Center.