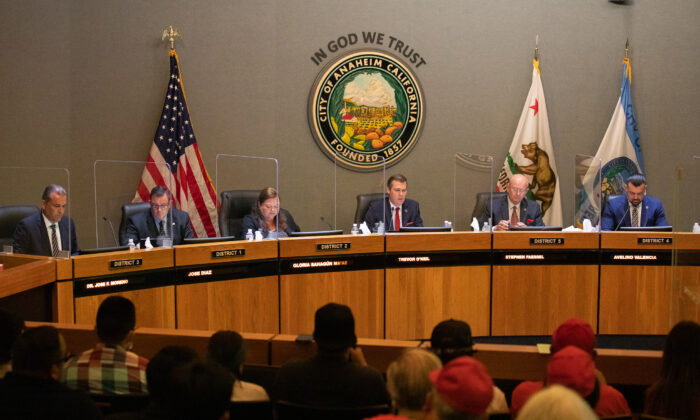 The city’s mayor, Harry Sidhu, resigned May 24 following the release of an FBI investigation report detailing his possible involvement in corruption during negotiations for the sale of Angel Stadium.

Sidhu has not been charged or indicted.

Councilman Jose Moreno was the only councilor who offered to serve as the appointed mayor to replace Sidhu but his offer was rejected.

“Let me just say for the record, I would be open to that appointment,” Moreno told councilors. “I would embrace it in the spirit of the office.”

The other councilors at the meeting declined to support Moreno and his attempt failed. Another suggestion by Councilman Stephen Faessel to direct city staff to find a retired resident for the appointment also failed.

The city’s charter, or constitution, requires the city council to fill the mayor vacancy within 60 days. If not filled within that time, the city needs to hold a special election.

However, the general election to elect a new mayor is Nov. 8, which makes the timeline too tight to organize a special election, according to Councilman Trevor O’Neil, the mayor pro tem, who is running meetings and handling mayoral duties.

O’Neil said he would not seek the appointment of mayor and the upcoming general election would allow residents to select their own mayor.

“It’s a moot issue because of the timing and the proximity to the election and the requirements to certify the election,” O’Neil said. “The bottom line is, the voters are going to select a new mayor in November anyway.”

In another action, the city council decided in closed session to release any funds paid into escrow by SRB Management, the development firm owned by Angels team owner Arte Moreno, for the sale of Angels Stadium.

The stadium sale was abandoned by city council at its last meeting May 24. Shortly after, SRB Management told the city it would not fight the sale’s cancellation.

Refunding the escrow money would be contingent on a written agreement with SRB that the company would not force the city to live up to any agreements made as part of the stadium sale, Fabela said.

Councilors also delayed making changes to its campaign finance rules and will take up the issue again at its regular meeting in two weeks.

Councilman Moreno requested the investigations and proposed new campaign finance rules for councilors that would require council members and mayors to abstain from voting on issues that could benefit campaign donors and political action committees, or PACs.

City staff was also directed by the council to start developing a bid request for an independent audit of former Mayor Sidhu’s campaign receipts and city contracts.