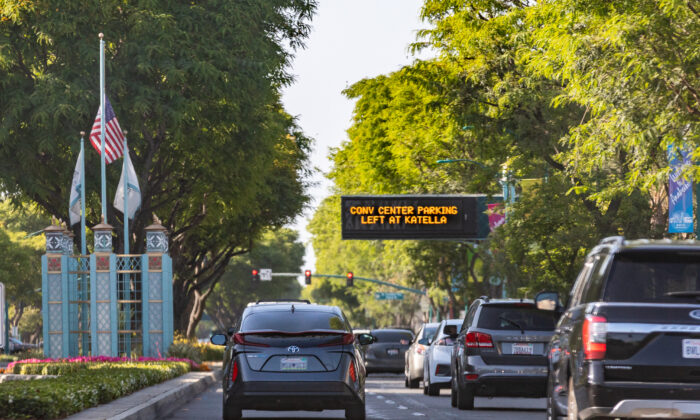 “The proposed budget represents our commitment to providing resources aimed at improving the quality of life of residents in Anaheim,” City Manager Jim Vanderpool told the city council in advance of the vote.

“Amid the strong recovery, the City of Anaheim is looking to the future by focusing on core strategies of public safety in neighborhoods, while also addressing current and future obligations,” Vanderpool said.

The budget is 8 percent higher than this year’s, with revenue from hotels, sales, and property taxes expected to surpass levels seen before the COVID-19 shutdowns.

The city lost about $185 million in revenue during the pandemic when the Disneyland resort closed, along with the Anaheim Convention Center. Operations at the city’s major sports venues—Angel Stadium and Honda Center—were also limited.

“Even with a strong budget recovery, we remain cautious about larger economic trends including inflation, rising interest rates and the risk of recession in 2023 or beyond,” a city statement reads.

Police funding rose to about $193.5 million—up about 18 percent from the city’s current budget. The additional money will fund salaries for the 26 new officers added this year to the city’s force of 617 positions within its police department. The funds will also pay for the higher cost of insurance and fleet charges.

The fire services budget increased by nearly 11 percent to reach nearly $115 million. The budget will pay for an added position, bringing the total number of employees to 331. Other fund increases will also pay for the rise in vehicle replacement costs.

Councilors also directed more funding for libraries and senior services, including nearly $785,000 more to open three libraries on Saturdays and about $225,000 to expand days at three other branches.

The city also allocated funds for 50 more neighborhood cleanups and resource fairs, up from 58.

“The cleanup events bring residents together to help dispose of bulky and other items and get access to family services,” the city said in a press release.

Anaheim increased its general fund by 9 percent to pay for nearly $408 million in day-to-day operations, including police, fire and paramedic services, general staffing and services, and park programs, libraries, and community centers.

The city will also allocate $3 million to remodel Fire and Rescue Station 4, built in 1954 next to Maxwell Park in west Anaheim, increasing the size and height of the station’s bays to house larger, more modern fire engines.

The city’s capital improvement program increased by 15 percent and was funded at more than $217 million. These funds will pay for park upgrades, roadways, sewers, landscapes, and electric and water systems. Some of these funds come from the state’s gasoline tax, developer fees, a portion of sales tax for transportation, and federal block grants.

About $118 million will fund improvements and maintenance of the electric and water systems, and stormwater and wastewater systems. About $20 million is budgeted to replace aging water mains that carry water throughout the city, and about $9 million will pay for new sewer lines in central Anaheim.

Street improvements are also on the list. The city budgeted about $72 million to improve streets, bridges, sidewalks and curbs, and to coordinate traffic signals.

The budget also includes $3.5 million to build a downtown park called Center Greens. The park will have a basketball court, butterfly garden, a shaded plaza, and a fitness loop. Construction is set to start in the fall.