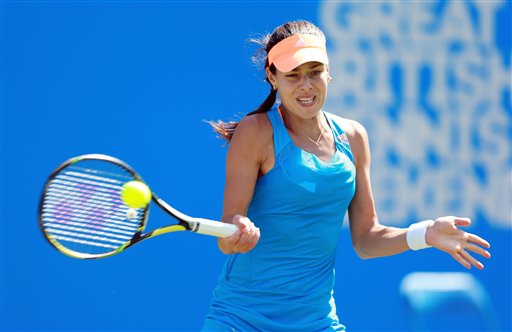 Ana Ivanovic vs Zahlavova Strycova is the final at the Aegon Classic at WTA Birmingham.

The match will be broadcast on the Tennis Channel in the United States. Other broadcasters aren’t clear.

A live stream will be available via the Tennis Channel or WTA.

Ivanovic and Strycova have met twice before, both several years ago.

See an Associated Press update below the photo.

BIRMINGHAM, England—Ana Ivanovic, the unpredictable former world number one, has reached her first ever final on grass at the Aegon Classic, a Wimbledon warm-up tournament.

After beating the ninth-seeded Zhang Shuai of China 6-2, 6-2 on Saturday, Ivanovic described the prospect of winning as a “dream.”

“Ten years on tour and I never have a title on grass,” the 26-year-old Serb said. “That would be definitely something special.”

Ivanovic had an different start and went 0-2 down as she struggled to land a first serve. However, she soon became too powerful for the 25-year-old Zhang, who was taking part in only the second grass court tournament of her career.

Ivanovic became more dangerous as she grew in confidence, and her timing on the slick surface belied her years of uncertainty on grass.

In Sunday’s final, Ivanovic faces Barbora Zahlavova Strycova, who is also playing in the first grass court final of her career.