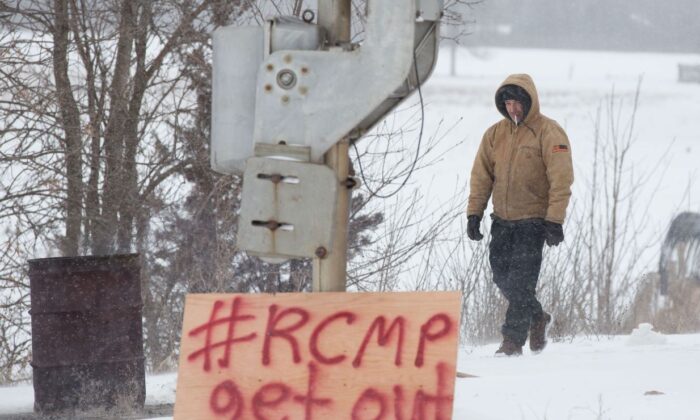 A man walks past a sign put up by protesters blocking the CN tracks in Tyendinaga, Ont., on Feb.7, 2020, in support of the Wet'suwet'en members' blockade of a natural gas pipeline in northern B.C. (The Canadian Press/Lars Hagberg)
Viewpoints

An Uprising in Canada? What a Pity

Ten years ago, Douglas Bland, a retired lieutenant-colonel from the Canadian Armed Forces and former chair of defence studies at Queen’s University, published “Uprising: A Novel.”

In this 500-page work of “fiction,” Bland outlines how militant Indigenous “warriors” and their allies could, in the tradition of Louis Riel, hold Canada for ransom, stopping rail traffic, blocking highways, disrupting government offices, and even bombing hydro towers north of Winnipeg.

Like Riel, these terrorists do not succeed in the long run, but in the short run they cause considerable damage to the Canadian economy, making many hard-working citizens distressed because they truly want to help Indigenous people take their rightful place in this country.

Without due care, such radicals would easily alienate liberal Canadians without realizing that they are their natural allies. Of course, their cause would fail, but it would take time and a lot of wasted resources and considerable anguish for this to happen. The perceived racism against this small group of Indigenous and non-Indigenous people, however, would last forever.

Bland’s book is a strategic plan for how such radicals can destroy the “goose that lays the golden egg.” These “warriors” and their allies seem to have forgotten that all Canadians, including themselves and their relatives, rely on a functioning economy for food, electricity, heat, water, and transportation.

The warning signs for such a crisis have been evident for many years. However, most citizens—and all our leaders—have misinterpreted the signs.

In 2007, for example, Phil Fontaine, then-national chief of the Assembly of First Nations, told a CTV reporter, “We have a right to be frustrated, concerned, angry—anger that’s building and building.”

The same year, Manitoba’s Terrance Nelson, then-chief of the Roseau River First Nation, told CTV: “There are only two ways of dealing with the white man. Either you pick up a gun or you stand between him and his money.”

So far, the radicals in the current rash of anti-pipeline rail blockades are only standing between Canadians and their livelihood. Fortunately, they have not yet resorted to guns.

Over the last 25 years, there has been the recognition that “Indian reserves” are “First Nations.” Then came the Royal Commission on Aboriginal Peoples, the Liberal government’s decision not to enforce part of the First Nations Financial Transparency Act, and finally the Truth and Reconciliation Commission (TRC) Report.

Embedded in this 3,500-page report are demands that Canada, the provinces, churches, and businesses accept the United Nations Declaration on the Rights of Indigenous Peoples (UNDRIP). In fact, 16 calls to action mention the declaration as a necessary step for reconciliation. Reconciliation cannot happen without accepting the declaration.

The British Columbia legislature has accepted UNDRIP in provincial legislation. But it will pay a high price for this foolish decision, and so will other Canadians.

UNDRIP gives Indigenous Peoples power over many economic, environmental, and developmental projects in B.C. More problematic, the declaration implies that the B.C. government will need to renounce some of its sovereignty because the United Nations will become the court of last appeal, especially in disputes with Indigenous people.

The clearest statement of this call to action is buried in Volume 6 of the report.

“What is clear to this Commission is that Aboriginal peoples and the Crown have very different conflicting views on what reconciliation is and how it is best achieved.

“The Government of Canada appears to believe that reconciliation entails Aboriginal peoples’ accepting the reality and validity of Crown sovereignty and parliamentary supremacy in order to allow the government to get on with business. Aboriginal people, on the other hand, see reconciliation as an opportunity to affirm their own sovereignty and return to the ‘partnership’ ambitions they held after Confederation,” the report reads.

“Canadian governments and their law departments have a responsibility to discontinue acting as though they are in an adversarial relationship with Aboriginal people and to start acting as true fiduciaries. … Therefore, we conclude that Aboriginal claims of title and rights should be accepted on assertion, with the burden of proof placed on those who object to such claims.”

This requirement for reconciliation clearly discounts the responsibilities that democratic governments have in balancing the complex, overlapping, and often competing interests of various citizens. In a democracy, laws and policies are always contested, and politicians need to balance various interests.

Most Canadians probably think that reconciliation means showing mutual respect and providing equal opportunities to people regardless of their cultural background, thereby eventually coming to an agreement.

Of course, cynics are wondering when the young “warriors” will pick up guns, like Riel, and make the Oka crisis look like a sandbox spat between two 6-year-olds. Too bad that the municipal, provincial, and federal governments are not tuned in to the cynics’ concerns.

Rodney A. Clifton is a professor emeritus at the University of Manitoba, author, and senior fellow at the Frontier Centre for Public Policy. (rodney.clifton@umanitoba.ca)