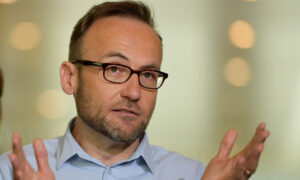 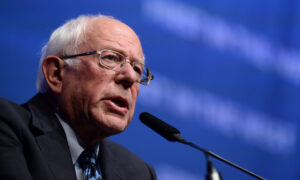 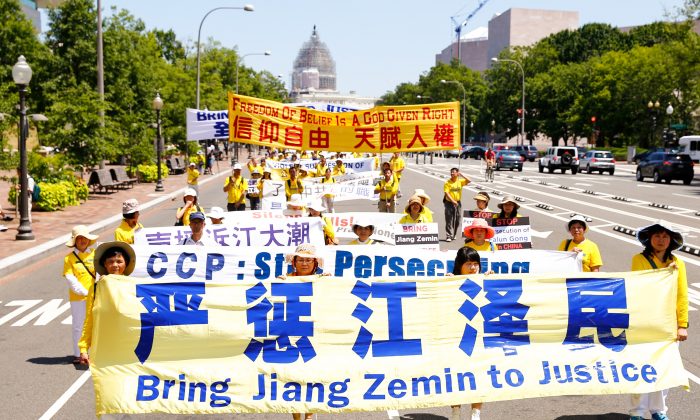 Falun Gong practitioners march calling for an end to the persecution they suffer inside China, in Washington, D.C. on July 16, 2015. (Edward Dye/Epoch Times)
Opinion

I send my most sincere greetings to you!

I am a former official in both China’s government and the Communist Party, a survivor of the Party’s persecution of Falun Gong, and the first Falun Gong practitioner expelled from Chinese Communist Party (CCP) membership. I would like to tell you about my experiences under China’s criminal justice system before I escaped to the United States in 2015, in hopes that this information will be useful for your upcoming summit with China’s chairman, Xi Jinping.

I also wish to tell you three requests that I have for Xi and hope that, using  your understanding and wisdom, you will be able to relay these requests to him.

Before I was detained, I was a writer working for Wei Jianxing, who was a former member of the Politburo Standing Committee and the secretary of the Central Commission for Discipline Inspection. To improve my health, I started practicing Falun Gong, a popular qigong practice, on May 3, 1995. Falun Gong (also called Falun Dafa) was first publicly taught by Mr. Li Hongzhi in Changchun City, China, on May 13, 1992.

Due to the appeal of Falun Gong’s tenets of truthfulness, compassion, and tolerance, and the practice’s effectiveness in improving the mind and body through its five sets of meditative exercises, it spread by word of mouth from Changchun to Beijing, then across China, and from China to all over the world. By 1999, there were already more than 100 million Falun Gong practitioners.

On July 20, 1999, Jiang Zemin, the head of the CCP at the time, made the decision to suppress Falun Gong by using the entire machinery of the state. He had seen more and more people start practicing Falun Gong and felt Falun Gong might become a threat to his power.

On the same day, I was arrested and held in solitary confinement because I previously had written a letter to Jiang titled “Falun Dafa Brings Only Benefits and No Harm to the Country and the People” and had sent it to him by registered mail.

Because I insisted on speaking the truth on the issue of Falun Gong, the regime illegally sentenced me to five years in prison.

I became the first Falun Gong practitioner expelled from Chinese Communist Party membership in China. From that time, my situation kept getting worse. Because I insisted on speaking the truth on the issue of Falun Gong, the regime illegally sentenced me to five years in prison from July 11, 2008, to July 10, 2013. On Jan. 22, 2015, I flew to New York from Beijing.

Between Nov. 17, 2015, and Jan. 19, 2016, I sent eight letters to Zhang Qiyue, the consul general of People’s Republic of China in New York, by express mail, with my letters to Xi enclosed. In my letters to Xi, I explained how my freedom of religious belief and freedom of speech had been violated with fabricated evidence under a corrupt judicial system.

There will be no way to expose this complete scam to the public in mainland China before Jiang is arrested. He is the prime culprit responsible for the persecution of Falun Gong.

However, it should be Zhang’s responsibility to transfer my letters, which I wrote in New York to expose such corruption of the Chinese legal system to Chairman Xi. Up to now, I have heard nothing back from Zhang about my letters.

Mr. Trump, I saw your advertisement in the Chinese edition of the Epoch Times newspaper, which stated: “Vote Trump, Make America Great Again.” At the moment, I am not yet a U.S. citizen and don’t yet have the right to vote. However, I encouraged all of my friends with voting rights to “vote Trump,” and they all did.

There is an old phrase in Chinese history: “God’s plans supersede our own.” In other words, God helps those who obey God’s will. You are a businessman, not a politician, so you don’t have a politician’s craftiness.

Your daughter Ivanka said in a speech: “Politicians see these hardships, see the unfairness of it all, and they say, I feel for you. Only my father will say, I’ll fight for you.” This is my favorite statement, which might also be the reason for why many voters chose you.

Hillary Clinton is a typical politician. Gao Zhisheng is a famous lawyer in China who has been severely persecuted for defending Falun Gong practitioners. An article by Gao said that when Clinton came to China, she wanted to discuss human rights issues and Gao’s situation. But after Clinton got what she wanted from the CCP, she never mentioned human rights and Gao again. I believe that Clinton’s failure to stand on the side of justice is the key reason for her failure in her presidential campaign.

Since July 20, 1999, former CCP head Jiang and his scoundrel politicians have employed all manner of evil means to persecute Falun Gong all over the world for more than 17 years. They have failed, however. Falun Gong has not been defeated. Instead,

This is a great movement, one unique to our time in history. What awaits Jiang is a trial that will expose his massive crimes against humanity and will be recorded forever in history.

Firstly, to get to the bottom of this complete scam of China’s legal process as soon as possible.

Thirdly, to immediately arrest Jiang Zemin, according to the law.