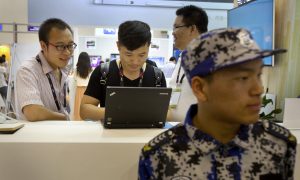 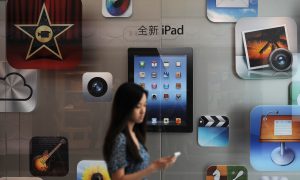 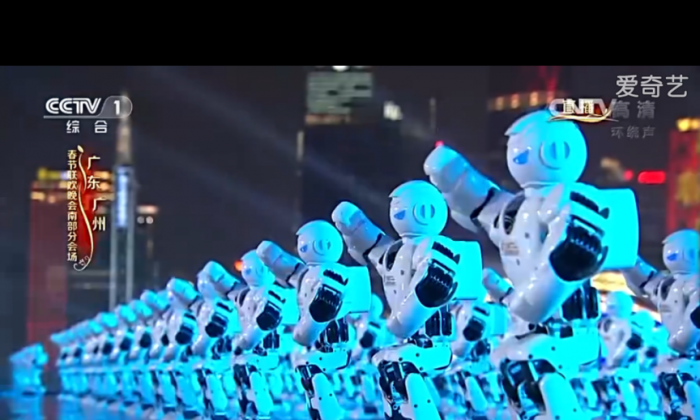 Caption: Image of robots in one of performances during CCTV’s New Year Gala in 2016. (screenshot/CCTV)
China

An Official TV Pageant That Chinese Liked, Whether They Liked It or Not

But this year, propaganda authorities declared victory ahead of time. Just after the Gala finished on Feb. 7 this year, the Cyberspace Administration of China ran an article saying that “The Innovative New Year’s Gala in 2016 Wins the Applause of Netizens.”

Reposted on the website of CCTV, the piece said that over 100,000 Internet users had given the “thumbs-up” to the Gala, that the hashtag #CCTVGala had been seen 2.15 billion times, and that 2.6 million comments had been made about it.

The article failed to note that CCTV had actually disabled comments on both its Gala page as well on CCTV’s own news report about the Gala on Sina Weibo.

The article consisted only of praise for the show, from citizens around the world, including from New York, Vancouver and Singapore. Ja Wong, a Chinese Internet user in Singapore said: “Thank you CCTV4 for bringing us joyful times.” CCTV-4 is one of many CCTV’s official networks.

Not only was the Gala a great hit, but its success was amplified by the fact that it exhibited “core values of socialism throughout the show,” and “expressed a nationwide festive atmosphere and warm scene in celebrating the New Year,” the report said. The programs were “closely tied to hot topics in society and closely related to people’s lives,” the Cyberspace Administration of China pronounced.

But the article failed to note that CCTV had actually disabled comments on both its Gala page as well on CCTV’s own news report about the Gala on Sina Weibo.

Over Half of China Uses Smart Phones, and Most Are Surveilled by the State

Thus, it denied Internet users a platform to express their actual thoughts, while declaring that everyone loved the show.

Netizens were convinced that the reason for shutting down commentary was to block negative opinions.

A Sina Weibo user with the name “Zuoyeben,” wrote “Why don’t you let people comment on the Gala? Not only is commenting not allowed on the Gala’s Weibo page—but why are Sina Weibo posts about the Gala also being deleted? If you are afraid of people commenting and discussing it, why don’t you simply stop holding it?” The post had attracted 59,113 likes and was forwarded 8,356 times.

Another post by Internet user Luo Bei Bei, who ridiculed the emotionless expressions of audience members, and remarked that one dance costume resembled a “bitter gourd,” got 4,273 likes and was forwarded 3,187 times.

Many of these negative comments had been deleted, but they could be read on Freeweibo.com, a website that scrapes deleted posts from Weibo. One example of a censored post was about a netizen demanding CCTV release the TV ratings of this year’s Gala as well as those from previous years. The performance has been held annually since 1983.

Another deleted post said: “The songs and dances that praise [the Chinese Communist Party] are just an attempt to cover up the corruption and licentiousness, the thieving and cunning, of those who control the media.”

An exemplar of the lyrics in songs that typify the Gala is: “The Chinese Communist Party provides a path of liberation for the people; gives the people a road to democracy; if there was no Communist Party, there would be no new China.”

Internet users remarked that the military and political content of the show this year was far stronger than in previous.