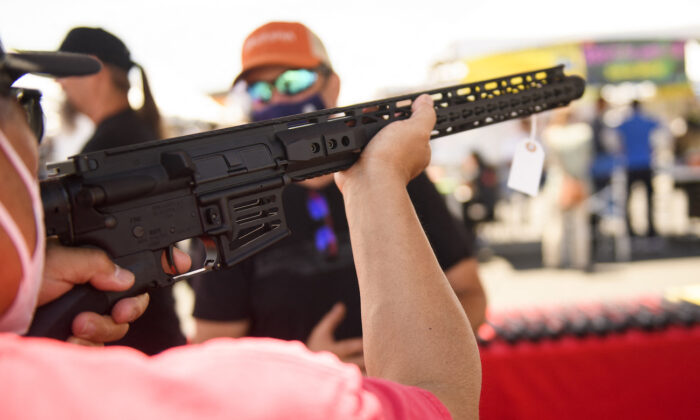 Gun sellers and gun owner advocacy groups greeted with cynicism the recently announced details on the federal firearms buyback program, saying no price is high enough for firearms they shouldn’t be required to surrender in the first place.

On July 28, Public Safety Canada issued a price list on how much owners of banned assault-style firearms could expect to receive under the mandatory program. A Swiss Arms SG550 assault rifle would fetch $6,209, while an AR-15 rifle would fetch $1,337. These are but two of over 1,500 models and variants of previously legal “assault-style” guns that the feds will no longer allow citizens to possess.

Blair Hagen, executive vice-president communications of the National Firearms Association, says the gun ban and buyback program are “an offence against citizenship” imported from anti-gun narratives in the United States.

“They can set whatever prices and plans in place that they want and that they think is fair. At the end of the day, everybody knows that they’re not,” Hagen said in an interview.

The federal government is seeking public input on the proposed compensation amounts until Aug. 28, and owners will have until Oct. 30, 2023, to comply. All known firearms owners will be contacted by the government on how to participate in the program.

“This has been completely rejected by the firearms community who will not stand for this,” Hagen said. “We have legal challenges coming up this fall. We may have a federal election around the same time. We’re going to continue to fight to defeat this.”

Rod Giltaca, CEO and executive director of the Canadian Coalition for Firearm Rights, called the proposal a failure.

“These firearms are no different than a variety of other firearms still not restricted in the Canadian market,” he noted. “Also, these firearms pose no greater threat than any other firearms that are currently non-restricted, including those that aren’t considered assault-style firearms by this government.”

Jim Osadczuk, owner of Sebarms Guns and Gear in Edmonton, says he doesn’t expect a government that seizes legally bought guns to honour a fair price.

“They’re going to give you like, 10 cents on the dollar. That’s my opinion, but I’ll guarantee the government’s not paying fair market value for anything. … [Owners should] hold up and wait till the end. There’ll be 100 extensions to whatever [Trudeau] is planning,” he said.

‘There’s a Lot of Frustration’

Testimony and evidence from the Mass Casualty Commission revealed that RCMP Commissioner Brenda Lucki wanted the Nova Scotia detachment to release details of the guns used in the April 2020 murder of 22 people in that province, as a way of supporting the pending legislation at the time to ban certain firearms.

The weapons used by the killer in the tragedy were not legally obtained.

Hagen says this revelation “sheds a lot of light” on where the desire for the gun ban is coming from.

“The Liberals have consistently said that law enforcement is demanding this, law enforcement supports this. But frankly, it’s pretty obvious that there is no support for this except inside the Liberal caucus itself,” he said.

“If they go forward with this, there’s going to be a heck of a lot more political controversy. There’s a lot of frustration. And all of that does not add up to a successful or positive contribution at any concept of public safety.”

The proposed price list gives one price for each of 11 categories of what the government has described as assault-style firearms. As the online document explains, “The price list was developed by using data sources that include: manufacturer prices, Canadian retailer prices, foreign retailer prices (e.g. USA/EU), pricing guidebooks and auction listings.” It adds, “The proposed price list for individual firearm owners above is subject to change.”

“This doesn’t have anything to do with public safety. This is a political exercise,” he said.

In May, the Liberal government tabled a firearm control bill that would freeze the import, sale, purchase, and transfer of handguns in Canada.

“One Canadian killed by gun violence is one too many. I’ve seen all too well the tragic cost that gun violence has in our communities across the country.Today, we’re proposing some of the strongest measures in Canadian history to keep guns out of our communities and build a safer future for everyone,” Prime Minister Justin Trudeau said on May 30.

Public Safety Minister Marco Mendicino said the legislation is part of a promise the Liberal government made to Canadians, saying it “will help to reduce gun violence and keep Canadians safe.”

Hagen believes the government has underestimated the program’s cost and points to the example of the long-gun registry introduced in the mid-1990s. The Liberal government of the day exceeded its initial estimate of a $2 million price tag and had spent $2 billion by 2004.