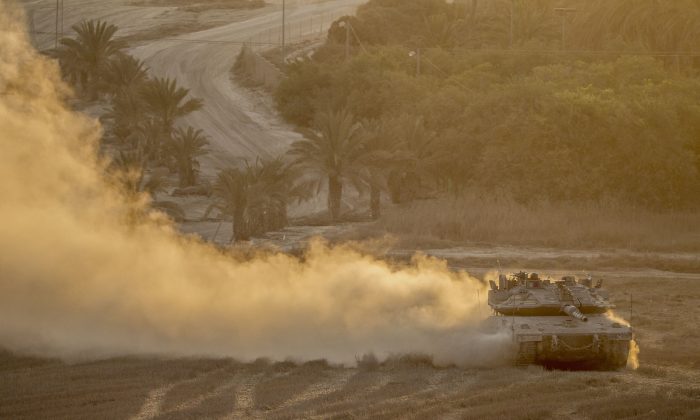 An Israeli Merkava tank rolls back from the Gaza Strip to an army deployment near Israel’s border with the Palestinian enclave on Aug. 4, 2014. (Jack Guez/AFP/Getty Images)
Opinion

An Israeli Welcomes Others to Do a Better Job Against Hamas

As an Israeli, I am 100 percent confident that Israel is doing its utmost to get rid of Hamas while trying its hardest not to harm civilians. Yet civilians have been killed, including children—the most innocent victims of all. People all over the world are outraged, and rightly so, when they see the images of devastation emerging from Gaza. I too am outraged. But the problem is that most people, unlike me, are blaming the wrong culprit—Israel. We pulled the trigger, but we are not the ones to blame.

So where are all you critics? Why aren’t you sending your troops to Gaza to eradicate Hamas in a manner in which not a single Palestinian civilian gets hurt? Not willing to do that? Yet, you have the audacity to criticize Israel, despite the fact that you wouldn’t dare to do a better job yourself? That is chutzpah.

I could tell you all about the efforts Israel makes to warn Palestinian civilians to get out of the vicinity of terrorists via leaflets, telephone calls, and roof knocking. I could tell you about how Hamas calls for civilians to ignore these warnings. Don’t believe me? Read for yourself on the Palestinian government website. These messages are no longer just in Arabic, sending one message to the world and one to its people. No more of that pretense. This message is in English: “The ministry calls all our people not to deal or pay attention to the psychological warfare carried out by the occupation through rumors that broadcast across their media and delivering publications and communications on the phones of citizens.”

I could go on about human shields, urging you to question why Hamas is launching rocket attacks from civilian areas—schools, hospitals, and so on. Even the U.N. admitted finding rockets in one of their schools in Gaza (and then apparently handed them over to Hamas, but that is an entirely different story).

I could go on about cease-fires—how Israel has honored three, while the Palestinians have failed to honor any. I could ask why it is that the apparent loser in this conflict is determined to continue? I could then descend into the abomination as to whether dead Palestinian children on TV screens are more valuable and important to Hamas than protecting those children.

I could rant on about the millions and millions of dollars poured into the Palestinian coffers, questioning why this money has been spent on acquiring rockets, and fattening up their leaders wallets, instead of investing in their people’s futures. (A cynic might even point out that the money spent on rockets is spent investing in their people’s futures.)

I could proudly tell you about the Iron Dome, how fantastically brilliant it is, and how I post a thank you on its Facebook page whenever I see that it announces that it has just knocked another rocket out of the sky.

I could certainly tell you how grateful I am that my country is doing its best to protect me from a vicious enemy. They built me bomb shelters, an air-raid warning system, and a barrier that has proven totally effective in stopping suicide bombers (and even that nonlethal method of combatting terrorism was too much for the civilized world, but that too is another story).

And yet the global media would still delight in publishing the gruesome images, clamoring for newspaper sales and hits to their websites, apparently completely oblivious to the fact that they are effectively doing the PR job of one of the most evil terrorist regimes on this planet.

And the fact is that the images would be real. (Actually, that isn’t entirely true. Some would be from Syria and not Gaza, but again that is another story. If you want to know about Pallywood, Google it.)

As I said, Israel is trying its hardest not to hurt civilians, but apparently our best simply isn’t good enough. No matter how hard we try, and how many improvements we make, and how much Israeli society agonizes over what we have to do, it is not enough. There are still too many dead bodies.

So, could we do nothing? Absorb rockets fired without retaliating? Well, we tried that, and that didn’t work out too well. The thousandth rocket that was fired at our civilians was the proverbial straw that broke the camel’s back.

Could we try another nonlethal method? How about making sure that no rockets reach Gaza in the first place. Well, we tried that too, but the fact is that some rockets did still reach Gaza, not to mention the fact that the world was outraged by the blockade, which has totally proven itself to be utterly essential. It needs to be a tighter blockade to make sure that no rockets at all reach Gaza, not to be relaxed. (Sorry world if that upsets your TV screen politics. Actually, I’m not sorry for that at all.)

Perhaps we could go the diplomatic method? Apparently not. The world insisted on giving money to the poor Palestinians without ever holding them accountable or responsible for where the money was spent. Millions and millions wasted.

Continuing on the diplomatic front, despite the glaringly obvious neon signs that a Palestinian unity government including Hamas would be bad news for everyone, the governments of the world embraced it with open arms and open checkbooks and promises that if they behaved badly, they would withdraw their support. Apparently, you forgot about that promise Mr. Obama, and Mr. Cameron, so let this be a reminder.

Surely you currently outraged citizens of the world are aware of the fact that your own governments still support the Palestinian unity government that includes Hamas. Surely you have spoken out against this abomination? Surely you have seen through the ridiculous claims that the Hamas entity in the Palestinian government is purely technocratical. See? Even the word technocratical is absurd. A spelling checker has more sense than the leader of the free world.

The simple answer is that we have to act against Hamas. Or at least that Hamas needs to be acted against. The best solution would be for the Palestinian people to act against Hamas, recognizing that Hamas is not acting in their best interests. But there again, seeing as it was the Palestinians who democratically elected Hamas to represent them, that isn’t likely to happen.

So there remains the need to eradicate Hamas.

Despite the fact that Israel has a proven track record of having a comparable, if not lower (but this is no time to brag), rate of civilian combatant deaths than many other countries or unions such as NATO, we have still failed in the eyes of the world. There are too many dead bodies being shown on TV for the hypocritical armchair critics to feel comfortable with.

Therefore I invite any country to send in their forces, or even their concerned citizens, to get rid of Hamas without harming the hair on the head of any Palestinian child. Show us how it can be done. Show us how humanely you critics can do it.

This isn’t simply a conflict “over there,” better kept at arm’s distance and not to get involved in, and far from your reality, like Syria. It is right there on your television screens each day and each night. And more fool you if you cannot see that Israel is on the front line of the West vsersus extremist Islam battle (fighting your battle alone, I might add.)

What does it matter if the analysis of the Palestinians who have been killed based on Al-Jazeera’s records prove that Israel is not killing indiscriminately? The fact of the matter is that this war is being fought on TV sets all over the world and also on the streets of London, Paris, and New York.

The reasons for needing to get rid of Hamas are crystal clear. They are not good for the Palestinians and they are certainly not good for Israelis. Millions of Israelis—Jews, Arabs, Christians, Baha’i, and atheists are currently facing the very real threat of rocket attacks. Millions of Palestinians are suffering since Israel is obliged (it does not merely have the “right” to self-defense, but it has an obligation to act against the war crimes being inflicted upon its citizens) to respond to the continued Hamas rockets.

There is no question that Hamas must be eradicated if there is a chance of peace. Their own charter states that they are against a peaceful solution. “Article 13: Initiatives, and so-called peaceful solutions and international conferences, are in contradiction to the principles of the Islamic Resistance Movement.” Hamas and peace are simply incompatible. Don’t simply harp on about getting the peace process back on track—it is absurd and downright embarrassing for anyone who dares to still claim that this is possible while Hamas is still in the picture.

They need to be eradicated. I don’t care who does it. In fact, I prefer that anyone but Israel does it since I am fed up with the agony of knowing that another Israeli soldier has been killed in this war that we never chose and never wanted, but are obliged to fight.

I am furious with the world, especially the Western “civilized” world. How dare you criticize Israel when you have never been in such a situation that we face, and when you yourself have behaved worse when faced with a comparable situation (look at the NATO devastation in Belgrade in 1999 for a good start)?

How dare you criticize! How dare you?! How dare you—unless you are willing to do what needs to be done “better” (more humanely) than us. Put your money (and your lives) where your mouth is. If not, how dare you criticize? A few countries might make excuses. But how can it be that out of over a hundred countries, there is no one willing to get rid of Hamas without harming any Palestinian civilians. The message is loud and clear—you wouldn’t dare try to prove us wrong since you know we are right. But prove me wrong. Please prove me wrong.