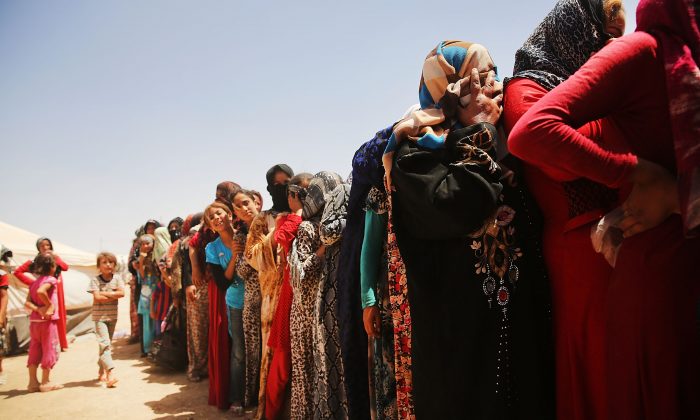 Desperate Iraqi women at the Khazair displacement camp for those caught-up in the fighting in and around the city of Mosul, wait for food and other items being dispensed by the Iraqi Red Crescent society on June 30, 2014 in Khazair, Iraq. Khazair is now home to an estimated 1,500 internally displaced persons (IDP's) with the number rising daily. Tens of thousands of people have fled Iraq's second largest city of Mosul after it was overrun by ISIS (Islamic State of Iraq and Syria) militants. Many have been temporarily housed at various IDP camps around the region including the area close to Erbil, as they hope to enter the safety of the nearby Kurdish region. (Spencer Platt/Getty Images)
Opinion

An ISIS Caliphate Is Bad News for Iraq, Syria and Everywhere Else

After the death of Osama Bin Laden in May 2011, the global jihadist movement seemed to have become fragmented and considerably weakened. This happened for various reasons. First, the coincidence of the al-Qaeda leader’s death with the start of the Arab Spring suggested to many in the region that they could change their regimes without the help of al-Qaeda.

At the same time, the absence of a charismatic and innovative leader to replace Bin Laden weakened the organisation and highlighted its association to the “old jihad”. The internal personal rivalry among the “emirs” of the different branches of al-Qaeda, each trying to appear as the true flag-bearer of jihad after Bin Laden, made cohesion hard to manage.

In 2011, al-Qaeda in the Islamic Maghreb (AQIM) was the first branch that tried to establish an “Islamic state” in Africa’s Sahel region. Documents found in Timbuktu, Mali, clearly show the details of this project and its progress both on a doctrinal level and on the military field.

Through its various lieutenants in northern Mali, for several months between March 2012 and January 2013, AQIM established a kind of Islamic state with “governors” and “judges” applying Sharia law. If it weren’t for the French military intervention in northern Mali, this “Islamic State” would still exist today and would probably extend across the Mali border and into part of the territories of neighbouring countries, starting from the south of Libya and Algeria and including western Niger at least.

Then it was the turn of al-Qaeda in the Arabian Peninsula (AQAP) who tried the same experiment in Yemen, controlling – almost at the same time – large areas of the south. In particular, the coastal city of Zinjibar was directly administered by leaders of the organisation for several months in 2012.

This jihadist project was defeated by a coalition of tribal forces backed by the Saudi intelligence services and supported by massive US drone strikes. Many leaders and key figures of AQAP were killed, hundreds of fighters of the organisation died in the fighting against the Yemeni army, but the risk of a “jihadist sanctuary” in Yemen still exists.

In both the Sahel region (with AQIM) and in Yemen (with AQAP), the jihadists took as their model the Taliban experience of the “Islamic Emirate” regime that dominated Afghanistan between 1996 and 2001. Most leaders of al-Qaeda knew this experience in detail and wanted to reproduce this “state model” on the territories that fell under their control between 2011 and 2013.

State Within a State

The territorial unification implied in the change of name was not purely symbolic, since fighters of ISIS were present on both sides of the Iraqi border and already controlled territories in both Iraq and Syria. Gradually, they have sought to ensure territorial continuity between Iraqi Sunni and Syrian Sunni populations.

The political justification for such a military commitment on both sides of the border was not accidental either, since ISIS leader Abu Bakr al-Baghdadi declared his intention to “erase” the consequences of the 1916 Anglo-French Sykes-Picot agreement, that established the current borders of Iraq and Syria.

The declaration of the “Caliphate” by al-Baghdadi now provides that legal framework that was lacking for the unification of territories on both sides of the borders. It is also an ideological justification for the forced union of jihadist fighters that was previously rejected in 2013 by the main jihadist group in Syria, the al-Nusra Front. The Syrian leader of al-Nusra Front, Abu Mohammed al-Julani, after having rejected any union with ISIS, immediately pledged allegiance to al-Baghdadi as the “new Caliph”.

The leader of AQIM, Abu Mussab Abdul Wadud, has also congratulated al-Baghdadi and ensured him of his support. Abdul Wadud previously supported Zarqawi’s al-Qaeda in Mesopotamia by sending him fighters from North Africa. This message from AQIM is a typical pattern of the old process of recognition of the caliph called the “bay’ah” (allegiance).

This practical reactivation of the concept of the “caliphate” by al-Baghdadi is particularly worrying as it creates a new unifying idea for disparate jihadist groups around a common strategic project. Since Bin Laden’s death, these groups were fragmented, but they might now be able to connect and share an ideology – and, probably, funding given the wealth of the “new caliph”. The “Caliphate Utopia” may reveal to be also a much more efficient tool for jihadist recruitment, especially among young Westerners.

This change might point to the marginalisation of the leader of al-Qaeda, Ayman al-Zawahiri, an Egyptian, who has not been able to impose himself after Bin Laden’s death. But at the same time it indicates the end of the fragmentation and the beginning of the reunification of jihadi groups around the world within an even more dangerous organisation. The global war against terror may finally start…

Mathieu Guidère does not work for, consult to, own shares in or receive funding from any company or organisation that would benefit from this article, and has no relevant affiliations. This article was originally published on The Conversation. Read the original article.