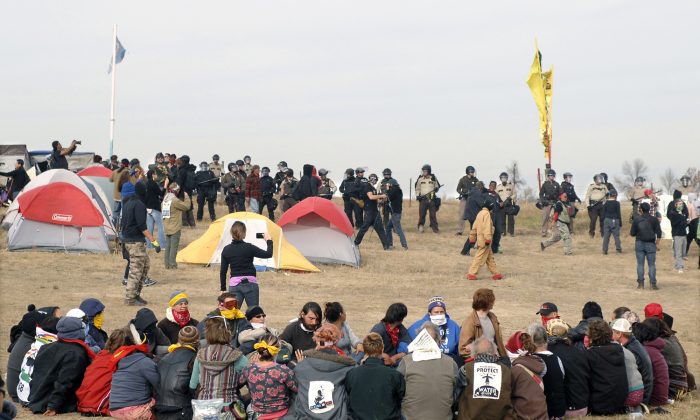 By Shelley B. Blank

Noeline Villebrun was elected National Chief at the 2003 Dene National Assembly (Aklavik, Denendeh). Former Chief Villebrun is deeply committed to maintaining Dene history and cultural heritage, which has led her to found the Yellowknives T’satsotine Society (2000). She is also a founding member of the NWT Residential School Interagency (1998) and the Fort Resolution Residential School Society (1998).

Former Chief Villebrun has been involved in the recent activities protesting the Dakota Access pipeline, which native tribes believe will harm water and important cultural sites, including burial grounds.
SBB: Please describe what you saw at Standing Rock in a poetic style of writing when describing a scene.
NV: Tthestonotine Sequi hez sli, Say zehah Tthestonotine Sequi sezh sah galth tah. Dene Neneh sen Dene slighee. Sah Yah Tehah ahyer narah sen ha lee. Tubehtah sahnah nuni dieyahti.
I am Tthestonotine Woman and I am called yellowknives woman, that is the name given to me. I am from Dene Land. My language is from this territory. We say Water is Life!
When I first arrived at the Border to North Dakota, a feeling of excitement came over me. Plus, knowing my journey there will end and another will begin. My thoughts were all over, then I understood it was my fear of the unknown, what would I see, would I know anyone besides my contacts? I was travelling by myself. These were the questions I needed answered to feel secure in my emotions and decisions I would have to make. I stopped along the way and asked questions of many people from all races. I was not shy when it came to asking questions—a good trait to have if you venture out alone and into the unknown.

SBB: Had the area already been cordoned off?
NV: Yes, the first blockade I went through was unnerving as I did not know what to expect. I prayed and sang to myself to calm my fears coming over me! The guard walked to my truck so I rolled down my window and said in a respectful manner, “Hello, how are you tonight?” He replied, “Good ma’am! Have you been through here before?” he asked. “No!” I replied truthfully. “I would like to inform you there are camps along the highway and to be cautious of the pedestrians walking on the highway. Watch the speed limit posted and have a good night ma’am.”

He gave me a small salute as he walked away. Wow! I thought this was easy and not at all confrontational as I inched slowly forward through huge blocks of cement strategically placed to ensure the vehicle slowed to a crawl through onto the unblocked highway.

The night was upon us as I drove past the blockade. I had asked the guard how far the camps were and he replied about 40 miles. As I drove into the night the fear left me and a feeling of relief came over me. It seemed endless until I finally saw camp lights, camp fires; heard drumming and singing. As I slowed down to a crawl going around the bend in the highway, I saw flags fluttering, people talking and laughing in groups or listening. Wow, I thought to myself, there are many prayers, ceremonies, singing, and people giving thanks in this big camp, not realizing there were three camps I would visit the next day.

SBB: Did you find other …

NV: I drove to the nearest point of contact, which was the Prairie Knights Casino. There I met up with my contacts. I was told not to worry about a place to stay. Someone would make room. I finally linked up with another woman from a previous conference in New York and she carried the Woman Staff for South, Central, North America as well as myself being honored to carry the Grandmothers & Grandfathers of the Sage Sacred Circle Unity Staff.

This new appointment had become another reason to go into Standing Rock and share the Unity Staff from the Sacred Circle with the Elders of the Camps. Share the message of hope, faith, that all our struggles are the same and the time to unite all the voices of the three continents under the teachings of our grandmothers and grandfathers.

So, next morning after having breakfast and meeting with many other water protectors from all over the world, the most common impact we had on each other was the hearts of the people in attendance. The true genuine love for another human being or living organism was revealed many times over and over. The people were there for a common purpose of getting the message out how important water is to life and everything around it.

These groups of people represented many organizations from many faiths across the world. This is what I seen transpiring in the lobby of the hotels or gathering places. This is the start of one’s morning in the lobby. The new alliances being formed through the message that Water is Life! Tu Beh Tah Sah Nah!

The messages about our sacred sites where we bury our recent and past loved ones are to be protected even in death. The message of not wiping out history of our ancestors or desecrating their resting places for profit. These are the messages that are being shared in the lobby before one heads out to the camp or front line for the first time.

SBB: What were you thinking at this point?
NV: My first thought driving into camp was an exhilarating feeling of everything. I couldn’t quite put words to describe this feeling, seeing the camp for the first time in daylight and meeting people.

The camp was huge, although I have been to bigger camps such as the Canadian Lac St Anne Christian Pilgrimage that many of our people make every year and camp there for a week of prayers. As many as 30,000 would camp for a week. What I felt was different here at Seven Council Fires Camp.

This was about prayer and spirituality! This was also about unity under a common purpose of saving our water and ensuring sacred ancestral lands were not being desecrated for profit. This was about many tribal people coming together to support and stand in solidarity on the values, traditions, beliefs, and spirituality of all our peoples. I have been to rallies, I have covered blockades of the past. Nothing prepared me for this era of solidarity amongst our tribes. I felt so happy in my heart.

I never felt this emotional since my residential school days, but in a good way. I have finally seen the unity of our tribes and the grassroots people who are the actual heroes on the front line. I felt the love and acceptance of one another and tolerance shown to each other. I felt so much strength and perseverance from the protectors. The spirituality of the People who talked about why they were there in solidarity. This was what shared with me. There were many stories and much information shared. The People were looking for direction or coordination of the logistics of the camps.

Let us give thanks for the present in all its rich potential, for the future and its opportunity to create a better world, and for the past in all its truth, validity, and reliability. Let us truthfully honor the past, if for no other reason than that we will all become part of it.

When the Pilgrims first came to Plymouth Rock, they were poor, hungry and ill-equipped to survive in their new surroundings.

Over half of them died within a few months from disease and hunger. Squanto, a Wampanoag man, found them in a desperate state. He spoke English, learned on his travels to Europe, and welcomed them with compassion. English crops having failed, the indigenous people gifted the Pilgrims with food to help them survive their first harsh winter and shared with them their knowledge of how to grow food in their new surroundings.

The Pilgrims looked upon the Wampanoag as heathen savages and Squanto was seen not as an equal but as an instrument to help only the colonists’ interests. But at that first “Thanksgiving” meal, the Wampanoag leaders signed a treaty granting Pilgrims the right to the land at Plymouth Rock. That was the real reason for the first Thanksgiving.

Since that initial sharing, Native American food has spread around the world. Nearly 72 percent of all food crops grown in what is now America today were cultivated originally by indigenous Native American peoples. Yet within 25 years of that first meal, European disease and betrayal had decimated the Wampanoags. Most from diseases that Europeans brought or their animals, Cowpox from their cows led to smallpox, or through gifts of blankets used by infected Europeans. Some estimate that diseases accounted for a death toll reaching 91 percent in some indigenous Native American communities.