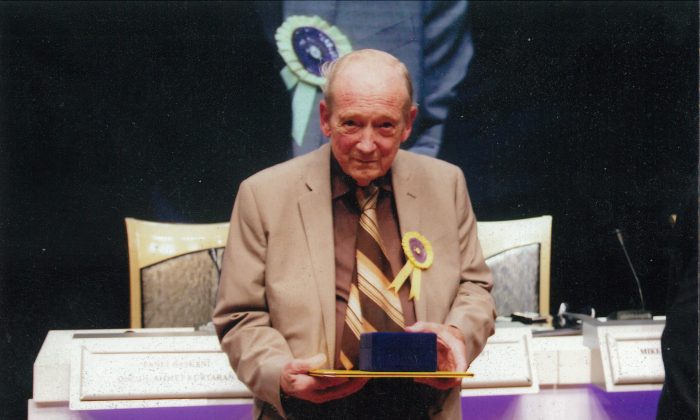 An Interview With Leland Stewart

Leland Stewart has worked for decades to build understanding between the world’s faiths. In 1965, Stewart founded the Unity and Diversity World Council Ministries and began holding events and meetings largely focused on peace, justice, and interfaith. In May 1978, the UDWC planned the first Survival Sunday, which was held in the Hollywood Bowl with 12,000 people in attendance.

The first Peace Sunday, planned by the Year of Shalom Committee, was held on June 6, 1982, in the Rose Bowl with 100,000 participants. Stewart and other representatives of the UDWC attended the event and began planning smaller Peace Sundays on an annual basis in 1999. Their most recent Peace Sunday celebration was held Sept. 20, 2015, at the Agape International Spiritual Center in Culver City, Calif.

SBB: How did you first become involved in interfaith activism?

LS: My background—I got bachelor’s degrees in mechanical engineering and mathematics from the University of Michigan. I then applied to Harvard Business School to get a master’s degree in business and was told that I needed more business experience. With that goal in mind, I went to work in industry for a year and then returned to the Business School for a second time.

During my year of working, I had numerous conversations with a Southern Baptist. I knew that I did not believe what he believed, but I was not sure as to what I believed. While sitting and waiting at the Harvard Business School the second time, I was reading Albert Schweitzer’s “Philosophy of Civilization,” when I all of a sudden knew that I would not be going to the Business School.

I then applied to Harvard Divinity School and was accepted, after which I was rejected again by the Business School. Since that time, I have been writing (“World Scriptures” and two other books), holding meetings, forming a nonprofit organization known as Unity-and-Diversity World Council, and working for peace, justice, and interfaith harmony.

SBB: Did that grow out of your involvement with Martin Luther King and various peace and civil rights demonstrations?

LS: I was very actively involved with demonstrations during the time of Martin Luther King and others. My concern was for peace and civil rights. My wife and I, with our five-month old baby, just got out in time before the police attacked the crowd during a demonstration at a Century City hotel. On June 23, 1967, President Lyndon Johnson was attending a $500-a-plate fundraising dinner at the swank Century Plaza Hotel.

SBB: So your activism began when?

LS: When I began studying for the ministry. I have been involved in working for peace, not always by being in marches but also by holding meetings, including an annual Peace Sunday for many years. I was a conscientious objector with respect to going into the armed services—for health reasons and because I believed that I had much more to contribute to my country and the world than by going into the armed services.

SBB: What is UDC, and how did you become involved?

LS: Once we began holding meetings and doing public events, it became clear that we needed a nonprofit corporation to support the work. After several efforts in that direction, we formed the International Cooperation Council during International Cooperation Year 1965, which was initiated by the United Nations. The name of the organization changed in 1980 to Unity-and-Diversity World Council and has remained the same since then.

SBB: Your group is also concerned with religious suppression.

LS: I became aware along the way that religion has been suppressed in China and in other parts of the world. In addition, Christianity and Islam in particular tried to convince people that their religion was the only important one, and that others should be ignored. On occasion people were killed for their religion.

Religious suppression is not desirable in any country, and we need to find ways of going around it or opposing it whenever it shows up. The interfaith movement is designed to get the world’s faith groups talking with each other and showing respect to the faiths involved. Groups such as Falun Gong need to become involved in the interfaith movement and share their story as to what is happening. There is strength in numbers and in the more respectful attitude that exists in the work of interfaith.

SBB: You began studying religion when?

LS: In college, I began studying other religions beside the Protestant Christianity that I grew up with. It was in 1955 when my wife and I came to California that we started intensively working on what was to be called “interfaith.” When I was at Harvard Divinity School, I did the first version of “World Scriptures.” Two other books in the interfaith field I have written since then, and all have been published. We now hold an annual Interfaith Celebration of Light in December in order to help people see “Christmas” as a time for all faiths to celebrate together in preparation for the New Year.

Our work in UDC is both with bringing the religions together and also bringing individuals, groups, and networks together in all fields. For years I have talked about creating a peoples’ equivalent of the United Nations. We are now doing this in various ways.

We held a United Peoples Convergence in connection with our last Peace Sunday, and we are now starting to hold monthly general assemblies. The next one will be on Saturday, Jan. 16, 10 a.m. to 1 p.m., at the IMAN Cultural Center in West Los Angeles. You are cordially invited to attend.

Spirit is One; paths are many!

“Faith: Faith is confidence or trust in a person, thing, deity, or in the doctrines or teachings of a religion or view (e.g., having strong political faith). It can also be belief that is not based on proof. The word ‘faith’ is often used as a substitute for hope, trust or belief. In religion, faith often involves accepting claims about the character of a deity, nature or the universe. While some have argued that faith is opposed to reason, proponents of faith argue that the proper domain of faith concerns questions that cannot be settled by evidence.” (Source: Wikipedia)

Some of Albert Einstein’s thoughts on spirituality:

“Science without religion is lame. Religion without science is blind.”

“The further the spiritual evolution of mankind advances, the more certain it seems to me that the path to genuine religiosity does not lie through the fear of life, and the fear of death, and blind faith, but through striving after rational knowledge.”

“God does not play dice with the universe.”

We all stand before our maker at the altar of our gods, beliefs, hopes, and fears. Some of us are content to light a candle before the holy images and pray. Others hear and preach of hearing the clarion call.

And while most of the moneychangers at the temple steps have found new false idols to worship, such as war and technology, there to a large degree remains the congregations’ self-appointed spiritual appraiser. He or she is the bookkeeper of other people’s spirituality and the self-appointed accountant of parishioners’ worthiness. They shortchange the treasure of communal joy by presuming to judge the spiritual worth of their fellow parishioners and of any alternative deity’s or reasoning.

Their makeshift ministry monitors who is a worthy believer, seemingly oblivious to the flaw in their accounting of the worthy: that is, to be able to decide who is worthy, you also have to decide who is unworthy. Such prideful judgments dismember the pillars of the temple. Let us bless the temple builders who shape the altars of spiritual responsibility and its priceless rewards of faith in the noble ideal, the unifying enrichment of the spiritual life.