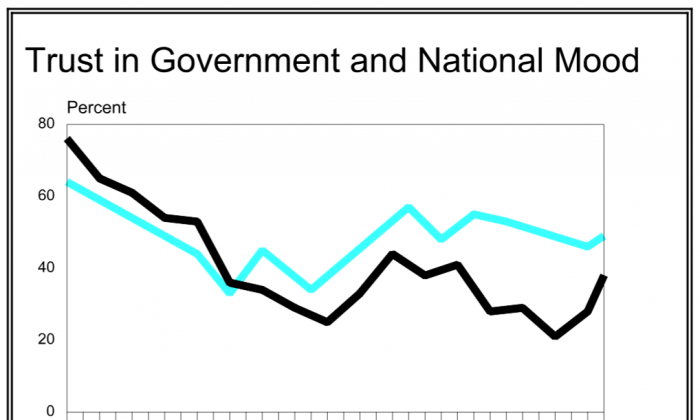 The relationship between Americans’ trust in the U.S. government and national mood, from 1964 to 1997. (Pew Research Center)
International

An Interview With Eugene Kiely, Director of FactCheck.org

Before joining FactCheck.org, Eugene Kiely was an assignment editor at USA TODAY, covering government and politics. Before that position, he worked the Philadelphia Inquirer, where he won a Sigma Delta Chi award for excellence in journalism in 2007.

SBB: Eugene, how did you become involved in and when did you start working at FactCheck.org?

EK: I’ve covered government and politics for more than 20 years. Prior to joining FactCheck.org, I was a Washington assignment editor at USA TODAY, where I led a team of reporters who focused on Congress, politics, and government accountability. I’ve also worked at the Philadelphia Inquirer and Bergen Record (Hackensack, N.J.). I was a congressional reporter covering the New Jersey congressional delegation and as a State House bureau chief in Trenton for the Record, and I was Pennsylvania Editor in charge of our state and political coverage at the Inquirer. I joined FactCheck.org in 2010.

SBB: Please tell us what your mission is and what your goals are.

EK: FactCheck.org is a nonpartisan, nonprofit “consumer advocate” for voters that aims to reduce the level of deception and confusion in U.S. politics. We monitor the factual accuracy of what is said by major U.S. political players in TV ads, debates, speeches, interviews, and other high-profile events. Our goal is to apply the best practices of both journalism and scholarship and to increase public knowledge and understanding.

SBB: What have you written about Syria?

EK: Our focus has primarily been on the Syrian refugee crisis and the statements that have been made about U.S. policy regarding the refugees. For example, Donald Trump has repeated on multiple occasions that he heard the U.S. would be taking 200,000 Syrian refugees. That is just flat-out wrong. It’s a little more than 10,000 in FY2016 and no commitments can be legally made beyond FY2016.

Another false statement is the claim that the Democratic administration is steering refugees to Republican states when in fact refugee placement is made by nongovernmental agencies, such as World Relief and the United States Conference of Catholic Bishops, based on jobs and family ties.

SBB: What have you written about Syria and ISIS—in terms of the worldview?

EK: ISIS is part of the larger, worldwide terrorist problem facing Western countries, and Syria is led by a president who kills his own people. We have written about President Obama’s misstatements on both.

Obama said, for example, that the use of chemical or biological weapons by Assad would be “a red line for us.” But Obama did not back up his “red line” comment with force after it was confirmed that Assad used biological weapons against his own people. The president sought to play down the importance of his “red line” comment by saying it wasn’t his red line, but rather a line set by the international community and by Congress.

But, as we wrote, neither the Chemical Weapons Convention nor the Syria Accountability Act authorizes the use of unilateral military force to enforce violations—so we concluded that the president was drawing his own red line and he backed away from his own words. Similarly, the president at one point called ISIS a “J.V. team,” suggesting ISIS isn’t a major threat. Nine months later, he tried to distance himself from his J.V. statement—claiming he “wasn’t specifically referring” to ISIS. But the context of his J.V. remark made it clear that he was referring to ISIS.

SBB: What would you like to be asked that no one has asked before?

EK: I would say a key question for me is, “Why does it matter whether politicians and elected officials are telling the truth”? That’s critical that goes to the heart of what we do. Quite simply, public policy should be evidence based. But politicians and elected officials who distort the facts rob the public’s ability to fully understand the issue and deprive themselves of making evidence-based decisions.

Take the Syrian refugee crisis. There are serious public policy ramifications regarding accepting Syrian refugees and how many to accept. As we have written, the refugee screening process is a multistep and rigorous process—but in the case of Syrian refugees the U.S. national intelligence director says it is a “huge concern” that ISIS could try to infiltrate the refugees. So how does the U.S. accept refugees while making sure that it does not allow ISIS terrorists to enter the U.S.? That’s a much-needed public policy debate, but you need to have an agreement on some basic facts—beginning with how many Syrian refugees the U.S. intends to accept. But even that basic fact has been distorted by some politicians.

Reflections: The Romance and Reality of Facts

A fact is a fact in any language.

To look with trained and steady eyes for facts, to find the subtle threads that join the distant with the now, to increase knowledge, to take burdens from the weak, to develop the brain, to defend the right, to make a palace for the soul. This is real religion.
— Robert G. Ingersoll (1833-1899), Lawyer, Civil War veteran, political leader, and orator

We are the species that invented wearing and changing our clothes to state our individuality. But a fact is not fashionable, seasonable, or in need of tailoring. We can not dress it up or do alterations to it. You cannot adorn it in priestly robes, body armor, or dispose of it when you have out grown it. It is the whole cloth, it is the essential proactive garment we dress our our brain in. It is the chosen standard wardrobe of our intelligence; without it our mind would be naked.

A fact is not like the dog who comes to you for approval, it is indeed like the cat that wants to be independent and its own creature.
— Anonymous

Invented facts are lies that are an assault on reality. Politics is the illusion of reality, where reality itself is replaced by the promise of changing unattractive facts.

The denial of facts is a threat to the concept of truth itself. And when truth is altered, faith is diminished.