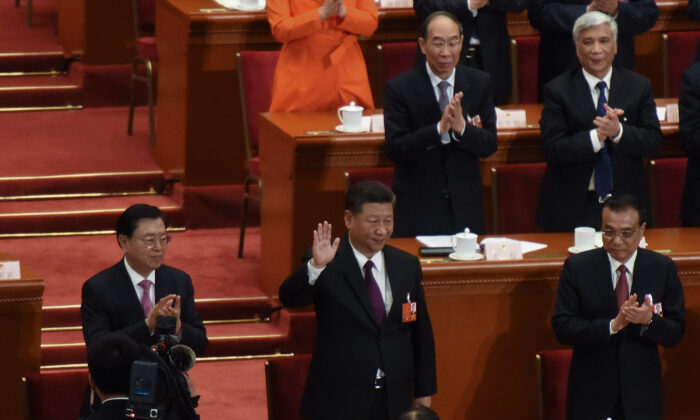 CCP head Xi Jinping (C) waves to the attendees with Premier Li Keqiang (R) and members of the CCP's Politburo Standing Committee Li Zhanshu (L) applauding by his side, after being elected for a second five-year term during the 5th plenary session of the first session of the 13th Congress in Beijing, China, on March 17, 2018. (Etienne Oliveau/Getty Images)
Inside CCP Officialdom

An Interim Provision Could Stop Xi Jinping From Being Re-elected

China’s rubber-stamp legislature is scheduled to hold its once every five-year meeting this fall. The re-election of the Chinese Communist Party (CCP) leader Xi Jinping is the main focus of this year’s meeting.

As the meeting approaches, Chinese social platforms and media have been releasing various signals that show Xi’s political opponents have continued to challenge the succession of Xi to a third term.

For instance, on June 2, Cai Xia, a retired professor at the Party School of the Central Committee of the CCP, posted on Twitter that an interim provision in 2006 is still in effect today.

The interim provision supposedly could challenge Xi’s ability to remain at the head of the CCP in the next term.

The Term Limit of the Party Chairman

Cai was referring to a regulation entitled, “Interim Provisions on the Term of Office of Leading Party and Government Cadres” that went into effect in 2006.

According to the interim provision, it’s applicable to incumbent leading cadres of the CCP’s top echelon.

It also stated that Party and government leading cadres can only serve in the same position for two consecutive terms or a total of 15 years.

Following Cai’s post on Twitter, Up Media—based in Taiwan—issued an article on June 5 indicating that Xi’s wish to extend his Party leadership could be hindered by the interim provision.

The article commented that Xi has met various substantive obstacles to his re-election since 2017 in the 19th national meeting of its rubber-stamp legislature.

A Dictatorship by Spy

Feng Chongyi, an associate professor of China studies at the University of Technology, Sydney, told the Chinese edition of The Epoch Times that Xi’s opponents are themselves lacking the political will to really have an effective impact on challenging Xi’s succession.

He does not believe anyone would dare to challenge Xi with the interim provision. “They would only avoid Xi’s attack so they can keep their posts,” Feng said on June 6.

Yuan Hongbing, former head of the School of Criminal Procedural law at Beijing University before he went into exile in Australia, said that none of these so-called rules or regulations mean anything to Xi.

He indicated that both the Constitution of the CCP and the Party rules can be changed at the leader’s will, which is a long-standing norm for the CCP.

Xi has established a dictatorship of his own; “Through his secret agents, he controls all the CCP bureaucrats,” Yuan said, meaning that even veteran cadres won’t be able to refute what he wants to do.

Commentator Li Linyi, however, believed that when the interim provision was brought into the spotlight, Xi obviously faced an ever-increasing attack from his opponents, especially his much-criticized strict zero-COVID policy that has brought the entire nation to the brink of economic and systemic collapse.

“The CCP’s only exhausting itself with the fierce infighting,” and surely is one of the “driving forces for the collapse of the CCP,” Li said.

Haizhong Ning and Luo Ya contributed to this report.