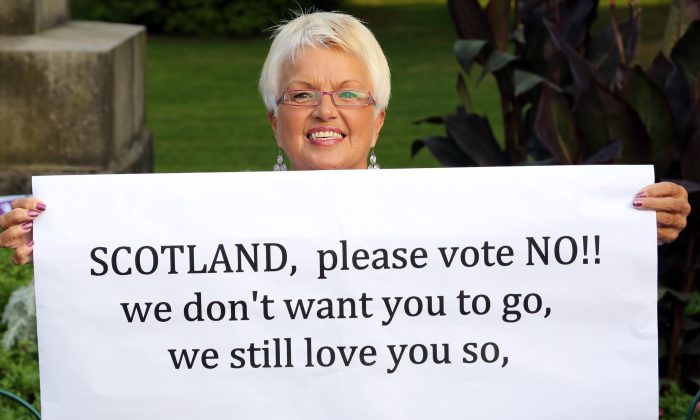 Belfast City councilor Ruth Patterson joins pro-Unionist supporters in Belfast, Northern Ireland, as part of a nationwide campaign in the U.K. on Sept. 17, 2014, ahead of the referendum on Scotland's independence. (Paul Faith/AFP/Getty Images)
Opinion

An Independence State of Mind: a View of Scotland’s Big Decision From Edinboro, Pa.

In my younger years, I would’ve jumped at the chance to vote “Yes” for Scotland’s independence, and even wrote a poem to that effect:

My attitude has tempered with time, and like many Americans who feel a deep affinity with Scotland, I am stuck somewhere in a haze between “Yes” and “No.” Thanks to Val McDermid, I now have a good word for my situation: “swithering,” hopelessly adrift. But the allure of freedom still tugs at the heartstrings.

I remember reciting Robert Burns’s “My Heart’s in the Highlands” in fourth grade, gazing longingly at the accompanying picture of a clansman looking out over the hills, as my mind began to equate Scotland with freedom. Of course, that image was completely make-believe, shaped from Burns’s words and an artist’s picture, with no experience of the real thing whatsoever.

We can argue over how much of current Scots’ beliefs and self-image are make-believe—not in a fairy tale sense, but in the sense of a socially constructed interpretation of reality—but all our cultural identities, with their accompanying stories and symbols, are always social fabrications, and so, inevitably, will be the meanings and reasons behind why Scots vote “Yes” or “No.”

Burns was certainly aware of this drama parading before us, and wrote that a man of independent mind “looks and laughs at a’ that.”

We all live in fogs of symbols, steeped in perpetuated myths. One person’s imagined Scotland, romanticized and antiquated in the mold of “Braveheart,” is another’s economic tradition, steeped in ideas handed down from Adam Smith. A contemporary clansman may sing of sending King Edward’s army home, while a “Yes” voter just wants the Italian loafer of a London moneyman off his neck. Both are living a dream, some dramatic, others all business.

“Scottish” is big business in North America, with hundreds of Highland games held throughout the year in the United States and Canada, several St. Andrew’s societies across the land, and thousands of single malt drams tipped at Burns Suppers every January. Even Tartan Day, April 6, is growing in prominence as a day of parades, massed pipe bands, and celebrations of America’s Caledonian heritage.

Many Americans who identify with things Scottish have a love affair with the idea of freedom. We sing “Flower of Scotland” at the opening ceremonies, and “Auld Lang Syne” as we hold hands and collapse circles to close the Robert Burns Scottish Club’s dinner each winter. Some sing “Scots Wha Hae” with the gusto of a true believer.
The Scots’ struggles for freedom have deep resonance for many Americans. In some sense, our colonies carried out Scotland’s vision, our independence a sort of spiritual extension of the Declaration of Arbroath.

Today, our enactments of “Scottishness” range from the wholly pretend to the authentic, rampant brigadoonery to thoughtful cultural awareness—some living the fantasy of Mel Gibson’s William Wallace, others living here and now and in this moment with Liz Lochhead. There’s no saying, really, whose real is more real.

I’ve been casually and unscientifically polling people on either side of the ocean, during our university’s study abroad program in Scotland last month and back home in the States. Many who I asked leaned to Yes—but in the United States, it’s so difficult to say No without just sounding pessimistic.

But what are they saying Yes to? Today’s chains are not about slavery and oppressors and usurpers—or are they? For many, perhaps independence is more a state of mind, symbolic more than real. After all, whatever the result of the referendum, interdependency will still be central; Scotland’s relationships with the U.K. and the rest of the world will still make all the difference to Scottish lives everywhere whether Scotland is an independent nation or not.

Throughout the study abroad program we ran this summer, our travelers were most impressed by that wonderfully witty and egoless sense of humor that distinguishes the Scottish psyche. We can only hope that no matter what the outcome of the vote, Scots will still look and laugh at a’ that.Tim Thompson is a professor of communication studies at Edinboro University of Pennsylvania. This article previously published at TheConversation.com.