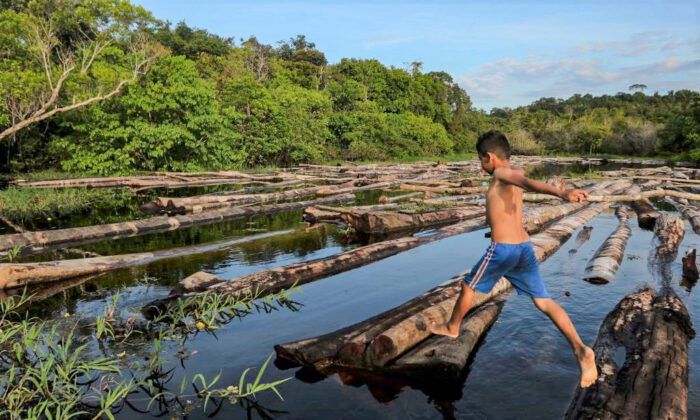 A boy jumps over logs seized by the Amazon Military Police at the Manacapuru River in Manacupuru, Amazonas State, Brazil, on July 16, 2020. (Ricardo Oliveira/AFP via Getty Images)
Viewpoints

An Inconvenient Truth About the Amazon Rainforest

What you have been told about the Amazon rainforest is not necessarily the truth, and quite to the contrary.

For example, World Wildlife Fund claims that more than a quarter of the Amazon rainforest will be devoid of trees by 2030 if cutting continues at the same speed. In reality, deforestation in the Amazon fell in May from the same month last year. According to environmental scientist Michael Shellenberger, deforestation in the Brazilian Amazon has declined dramatically over the last 15 years. It remains at one-quarter its 2004 peak when the president of Brazil was Lula da Silva.

Sérgio Moreira Lima is Brazil’s Ambassador to Australia. He explains that Brazil has dramatically reduced deforestation of the Amazon rainforest by 72 percent during the past 15 years and that more than 9.4 million hectares of native forest have been regenerated and planted on a further 2 million hectares.

The ambassador also explains that 66 percent of the entire landscape of Brazil remains entirely covered by native vegetation, and the nation’s protected areas amount to approximately one-quarter of its national territory—and half of the Amazon region.

In the Brazilian Amazon alone, at least 84 percent of the entire landscape remains pristine and untouched. Although the country has preserved more than 66 percent of its native vegetation, the country is still the fourth largest food producer in the world. Brazil is entirely self-sufficient in basic foodstuffs and it ranks as the world’s number one producer of banana, cacao, cassava, coffee, corn, orange, maze, rice, soybean and sugar.

Efforts to Protect the Rainforest

The Brazilian government has recently created the National Council of the Legal Amazon to coordinate all the integrated work for the protection, preservation, and sustainable development of the Amazon rainforest. Enacted in April 2021, the Amazon Plan 2021/22 sets up strict guidelines for monitoring and combatting illegal deforestation, fires and other environmental and land crimes committed in the Amazon rainforest. On June 10, a “National Force” was deployed by the Brazilian government to the region to combat drug trafficking and organized environmental crimes.

Through these coordinated actions, the number of deforestation alerts in Brazil has declined for two months straight, and the number of forest fires has fallen significantly over the last two years.

As can be seen, the world has a lot to learn from this country when it comes to environmental protection and sustainable economic growth. And yet, Brazil’s President Jair Bolsonaro says the leaders of the United States (Joe Biden), France (Emmanuel Macron), Canada (Justin Trudeau), and the United Kingdom (Boris Johnson) never miss an opportunity to “corner Brazil all the time” over the Amazon rainforest.

Of course, there is nothing extraordinary happening in that region. In this context, the Brazilian government sensibly decided to turn down the G7 countries an offer of aid (US$20 million) in combating fires in the Amazon in August 2019. Brazil is the ninth largest economy in the world by nominal GDP and it certainly does not need such a “help” from other countries.

Based on hyperbolic twitter photos, French President Emmanuel Macron made the supposed “international crisis” of the Amazon fires a “first order” emergency to be discussed in the 2019 G7 Summit. Prior to that event, he wrote on Twitter: “Our house is burning. Literally. The Amazon rainforest—the lungs which produces 20 percent of our planet’s oxygen—is on fire. It is an international crisis. Member of the G7 Summit, let’s discuss this emergency as a first order! #ActForTheAmazon.”

First of all, everything the French president wrote in that Twitter post was completely untrue. For example, Dan Nepstad, one the world’s leading Amazon rainforest experts, explains that the region “produces a lot of oxygen but it uses the same amount of oxygen through respiration.”

In fact, even the photo Macron had used to show the fires in the Amazon was fake—a stock photo from a photographer who had already passed away. The fires seen in the photo are set by farmers preparing Amazon-adjacent farmland for the next year’s crops and pasture. According to America’s national space agency, NASA, “in the Amazon region fires are rare for much of the year because wet weather prevents them from starting and spreading.”

Based on this sort of false and misleading information, Macron even threatened to cancel a substantial foreign trade deal between Brazil and the European Union. Arguably, these global leaders do not really care about the Amazon rainforest or the world environment. Instead, they are just cynically exaggerating the impact of fires and deforestation in the Amazon in an attempt to demonise the Brazilian president, “the Trump of the tropics.”

Of course, another possible reason is the global economic interest in Brazil’s northern region where the Amazon rainforest is located. The Amazon rainforest is a huge bank of endless natural resources for the Brazilians. The region has the largest percentage of sweet water, valuable minerals, and petroleum in the world. It is also home to an estimated 20 percent of the Earth’s plant species, many of which are found nowhere else.

It is no wonder these global leaders are appealing to environmental issues in attempt to undermine Brazil’s sovereignty.

The Bolsonaro government is also protecting the rainforest by obtaining a continuing supply of fertilisers for country’s massive agriculture industry. Brazil is the world’s largest importer of the product, of which 44 percent is sourced from Russia.

Apart from Russia, where could Brazil find more fertilisers from?

The potassium reserves in Brazil are primarily in the Amazon region. According to Márcio Remédio, director of Geological Survey of Brazil, a state-owned company under the Ministry of Mines and Energy, “These reserves are world-class. They have the potential, if not more, than those in the Ural Mountains produced by Russia and Belarus, and also of Saskatchewan in Canada.”

By making an agreement with Russia to continue buying fertilizers, the Brazilian government prevented not only potassium mining that could harm the Amazon region, but also potentially saved the world from a catastrophic food crisis.

“If Brazil were to scale back next year because of a lack of fertiliser, that would certainly be bad news for a global food crisis,” says Joseph Schmidhuber, an economist who has studied the conflict’s impact on food for the United Nations’ Food and Agriculture Organisation.

As Bolsonaro points out, “Brazil feeds one billion people. We guarantee the food security of one-sixth of the world population.” In other words, not only has the Brazilian government avoided a catastrophic food crisis by replenishing the country’s stockpiles with the help of Russia, but it has also been playing a leading role in protecting the Amazon from fires and deforestation. World leaders have lots to learn from the Brazilian leader when it comes to food security and preserving the environment.

However, at the Cúpula das Américas summit in Los Angeles, held between June 6 and June 10, Bolsonaro bitterly called out the “international misinformation and pressure” over the Amazon rainforest. In his speech, he reminded other leaders that no other country in the world has done more to protect the world environment.

“After all, we are responsible for emitting less than 3 percent of the planet’s green gas emissions, even though Brazil is the 10th largest economy in the world,” Bolsonaro said. He also took the opportunity to praise the country’s agribusiness, reminding everyone that, without it, “part of the world would go hungry.”

To conclude, we are witnessing a deliberate campaign against the competent leader of a nation that has protected its rainforest and potentially saved the world from impending mass starvation. Arguably, the ultimate goal of these global elites is not just to prevent the reelection of a conservative leader in the forthcoming presidential elections in Brazil, but to dispossess the Brazilian people of their land by taking a large part of their land and their nation’s natural resources.