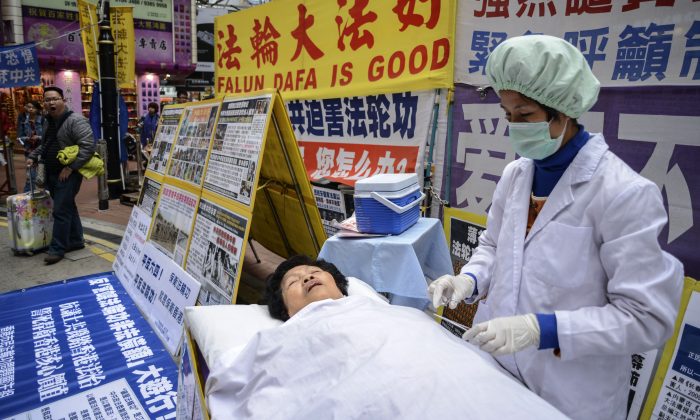 An Excuse for Genocide

In history some events are remembered as the sparks that ignite greater calamities. The assassination of Franz Ferdinand, Archduke of Austria, instigating World War One, and the rise to power of Mikhail Gorbachev, ultimately leading to the collapse of the Soviet Union, are but two examples.

Among such events is a little understood turning point in recent Chinese history – the April 25, 1999 “Zhongnanhai appeal.” Some China observers have labelled this event as the catalyst for one of the most vicious spiritual oppressions in modern times.

Just seven years before the Zhongnanhai appeal, Mr Li Hongzhi, who has been short-listed for the Nobel Peace Prize, brought the spiritual practice of Falun Gong to the public. A combination of exercises, meditation and moral principles, Falun Gong quickly became popular throughout China. It was this popularity that would pose a perceived dilemma for China’s Communist regime, which displays zero tolerance towards any alternative voice.

Zhongnanhai, the Central Government compound in the capital Beijing, was the site of the first major public appeal by Falun Gong practitioners. It was also the largest spontaneous public gathering since the 1989 Tiananmen Square massacre.

Based on video evidence, at least 10,000 Falun Gong demonstrators gathered outside Zhongnanhai to deliver a petition to Communist Party leaders – an unprecedented turnout considering the regime had strived to silence public expression.

The images captured by ABC cameramen showed an orderly assembly of Chinese people, standing in a row several people deep, stretching two kilometres along the tree-lined sidewalks beside the Forbidden City. Some practiced Falun Gong exercises, while others were sitting or reading. The unique silent protest appealed for two things: to regain the Communist regime’s official recognition of Falun Gong and to petition for the release of Falun Gong practitioners arrested in the coastal city of Tianjin.

Two weeks before, the Youth Science and Technology Reader periodical carried an article by He Zuoxiu, notable for his opposition to alternative practices. The Hong Kong-based Ming Pao newspaper reported that He Zuoxiu – brother-in-law of Luo Gan, the Minister of Public Security, who would later spearhead the anti-Falun Gong campaign – defamed the practice by presenting a “distorted” view of its principles.

In response, a number of Falun Gong practitioners appealed at the Youth Science and Technology Reader office, asking the editors to retract the erroneous article.

The magazine refused and called the police – consequently, 45 practitioners were beaten and detained. In response, the local practitioners appealed to the Tianjin Municipal Government, which redirected them to the Central Appeals Office in Beijing.

Reports from The Washington Post said that the majority of the protesters at Zhongnanhai were from Beijing. However, some had travelled from as far away as Zhejiang Province, over 1000km to the south of Beijing. Major transport systems leading to the capital were ordered shut down.

When the protestors arrived at Zhongnanhai early in the morning, some 1000 public security personnel and plainclothes officers had already been deployed.

Although fears of rioting proved unfounded, police refused to let practitioners approach the main Appeals Office. In fact it was the authorities that directed them into a position opposite Zhongnanhai that seemed to surround the complex. This tactic was a calculated move that was used to falsely accuse Falun Gong practitioners of “encircling” the building.

After 24 hours of negotiations between the demonstrators and Beijing officials, five representatives of the group were invited to speak with Premier Zhu Rongji. Mr Zhu shortly issued an order to release the practitioners arrested in Tianjin and the crowd quietly dispersed between 10:30pm and 11:30pm.

Despite this resolution, there was turmoil in the Politburo. In a move to consolidate his personal power, Jiang Zemin, the ex-leader of the Chinese Communist Party (CCP), illegally outlawed the practice three months later on July 20, 1999.

This marked the beginning of a nationwide campaign to slander and eliminate Falun Gong. Falun Gong books, videos and tapes were confiscated and destroyed on a large scale. Exercise sessions in public parks were regularly harassed, with some eyewitnesses recalling practitioners being picked up by police and thrown onto the ground while still sitting in cross-legged meditation.

Thousands of people were herded into stadiums before being transferred to labour camps. No formal trials were held; any deaths of Falun Gong practitioners in custody were treated as “suicides.”

Nearly 3000 deaths of Falun Gong practitioners from beatings and torture have been verified since 1999; however, human rights experts have placed the figure as high as 10,000. As many as one million are believed to be unlawfully detained in labour camps across China.

Such draconian oppression has prompted observers to question the motives behind the crackdown on Falun Gong.

It could be a case of historical déjà vu. China’s regime is yet to admit that the 1989 Tiananmen Square massacre ever took place.

In fact, any reference to the globally denounced slaughter of the pro-democracy students has been deleted from China’s textbooks and is blocked from access on the Internet.

The famous footage of a solo figure at Tiananmen attempting to halt the tanks serves as a reminder of the sacrifices that the people of China have had to make over the years to have their voices heard.

Although the courageous student’s identity was never confirmed, his message is timeless. Perhaps the legacy of Zhongnanhai may one day be written into the history books as an event that exemplified the courage and dignity of the Chinese people.