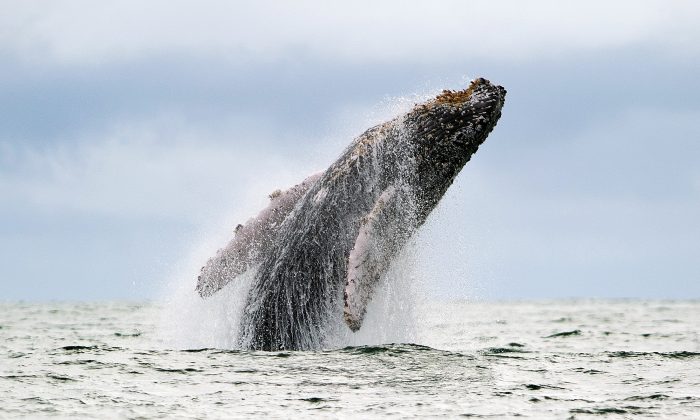 A Humpback whale jumps out of the surface of the Pacific Ocean at the Uramba Bahia Malaga natural park in Colombia, on July 16, 2013. Humpback whales migrate annually from the Antarctic Peninsula to the Colombian Pacific Ocean coast, with an approximate distance of 8,500 km, to give birth and nurse their young. (LUIS ROBAYO/AFP/Getty Images)
Opinion

An Encounter with the Great Sirens of the Sea

Like a cetacean torch lunging out of water, a humpback greeted the setting sun in ecstatic breach. So started our journey with the great sirens of the sea.

We had come to the kingdom of the whales, like a modern day Ulysses, seduced by the circumference of an ocean far beyond our understanding. We had come to behold a wonder of being, one of the great whales, the humpback, whose very comeback honors the earth with its inimitable cry, whose seemingly plaintive song haunts the human soul like few sounds on earth. Their song reverberates with the pulse of eons, like a carnal cry and overture to existence.

To be absorbed by their presence is one of the great gifts of simply being alive.

We are sending messages to outer space, but only recently have humans been able to enter their world and see into inner space.

There in the deep cerulean Caribbean, titans surrounded us and invited us into their world. We were touched by an alien species, one that was tolerant of our increasingly fragile kind, spiritually and emotionally arrested, one desperately remote from the needs of the earth, a species requiring restraint like never before.

There are few encounters that allow the thin membrane that seemingly separates us from the ocean to become permeable. The whales are a depth charge of recognition and a great reminder to our humanity that we are not alone.

At one point five swam around our group, impossibly vulnerable without the safety of any vehicle or boat, but they trusted us as if our souls were on common ground. Majestic and powerful beyond measure, these leviathans opened their world to us casting a spell of imponderable magic over our terrestrial and gravity-bound selves. Like guardians of the sea, their incomparable might and yet sheer serenity composed an opera impossible to match on the hard bedrock of terrestrial experience.

More Than 200 Whales Swim Away After New Zealand Stranding

And then they disappeared like shadowy ghosts in the vast current of the sea.

One can behold the spectacle of tail fins smashing the ocean surface or pectoral fins doing the same, while males vie for the attention of females and exult in the avalanche of erupting sound.

But it is the singularity of being observed by them, by their eyes that resemble miniature earths, immersed in their medium, that utterly transforms. One becomes an initiate to something both otherworldly, and perceptually innerworldly, as if one were coming face to face with an aspect of one’s own mind.

At times diving, then resurfacing, coming within ten feet and then disappearing “like angels,” according to our son Lysander, the whales moved in aqueous light like gigantic ballerinas. The experience is a baptism unique on earth. For a brief moment one is allowed to become a corpuscle in the ocean’s tide, of blood remembering itself, almost escaping the burden and mass of what it  means to be human in this time. Their exhalation when they come to the surface to breathe become our exaltation, a rejoicing in the skin of this planet. Who, if given the chance, like Aphrodite from ancient Greece, would not wield superhuman powers and choose to metamorphose into a whale?

Lawrence’s poem “Whales Weep Not!” exclaims that they are “burning archangels,” who have the “hottest blood of all, and the wildest, the most urgent.” Urgent because with all of our capacity for innovation we have nurtured the equivalent potential to destroy; with all our means of exploding the life force, with all our harpoons, with all the massacre and damnation the whaling industry has unleashed on the cetaceans of the world over the centuries, we could have lost them. And in the end, we summoned the collective will to save them, and maybe ultimately ourselves.

Barely a century ago they were mutilated almost to the point of extinction, when 90% were destroyed for the whims of an industrial civilization which has polluted the ocean almost beyond repair. At the final hour, humanity came to its senses and gave a reprieve to the whales, and the humpbacks started to return. The rogue whale hunting nations of Iceland, Norway and especially Japan still refuse to join a total ban on whaling. While whale watching is increasing, fewer than 3% of Iceland’s population still eat them. Their whales go to Japan, but that may soon come to an end. One can only pray that all whaling will soon meet its demise and join the chorus of those fighting for the elephants, their distant, distant cousins, so that they too do not perish from the earth.

Humanity’s tenuous relationship to nature cannot be redeemed if we do not redeem the others species. The annual journey of the humpbacks is the great mammalian migration of earth, and who can dream what fathoms each whale species undergoes to survive in this extraordinary time? The only movement we can see and touch is their outward odyssey, but I suppose there are moments of introspection and wonder that only these magnificent creatures can match with their resonant minds producing songs at the wavelength of sheer coherence, unique in the sentient world.

Their journeys are the great songlines of the planet, meridians of intelligence that merge the sublime with life itself, before which we stand speechless and almost breathless.

Whales greeted us with the magic of their exultation, their leaping testament towards the sky, their acknowledgement of the frail human form, and their incantatory spirit of voice, like a desperate prayer for the ocean. Right whale babies, the most endangered whale species on earth, have been found by the dozens, dead on the shores of Argentina. Algal blooms and oxygen dead zones spread, as poison leaks from decades of industrial debris. The loss of salmon threatens the food chain along with the lives of Orcas in the Pacific Northwest. Strandings due to sonar from navy exercises are blowing out the ears of whales worldwide. We greedily make plans to tap oil reserves in the Arctic as if it were an industrial theme park. Shipping lanes bully and abuse whales, causing fatal injury across the seven seas.

The humpbacks have been given a reprieve, yes, but the cancer and stress of technological “civilization” continues to threaten whales and oceanic life everywhere.

The whales are essential to the carnal immune system of more than three quarters of the planet. In the Arctic regions the Inuit say they are “perfect creatures.” They mirror our most profound need: to be free.

In this time of confusion and increasing servility to war and the most debased forms of human expressions, the whales embody a grace we need more than ever. Messengers from the void of the dark waters, they are the swimming cathedrals of this sphere. They have culture. Their songs modify and transform over time. They are the grandest wonder of our existence, of our time.

Without the whales, we would drown not in water, but in a loneliness beyond anything we can presently fathom.

An International Environmental Tribunal should be established to prosecute those countries that wreak havoc on and “profit” from environmental destruction and species loss. The future of whales affects not just the seas and most of the earth’s oxygen, since whales fertilize the oceans’ algae, but also the future of our conscience as a species.

Instead of the deranged fixation on constant growth, which in the world economy is uprooting what is left of the environment, real growth would entail moral stewardship and reversing course on a ship of civilization that is foundering. In this tenuous time, when globalization continues to savage and pollute the oceans for commerce, the whales must be allowed to “roll with massive strong desire, like gods,” as DH Lawrence wrote.

Indeed they must be saved.

As whales roam the depths of the human mind, embodying the immensity of the oceans and the eons of time they took to come into creation, their mythic stature and their colossal biological standing is not in question. Their great gift to our fragmented kind is the unparalleled splendour and utter wholeness of being they bestow and one we can well envy in this unprecedented time.

Cyril Christo
Follow
Cyril Christo is an award-winning photographer and filmmaker. He and his wife, Marie Wilkinson, have travelled extensively around the world. They have published several photography books exploring ecological and man-made challenges and endangered bioregions and species. The couple is currently working on a documentary film, “Walking Thunder: The Last Stand of the African Elephant,” which weaves a family’s personal journey in East Africa with indigenous people’s stories.