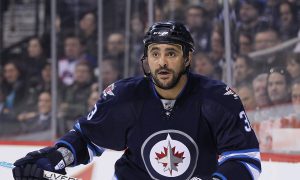 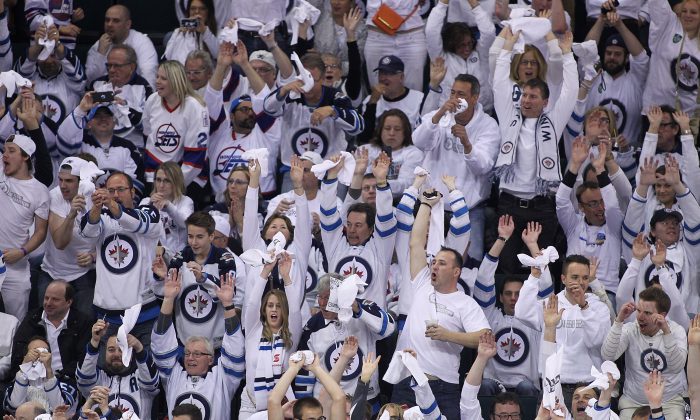 Winnipeg Jets fans do the wave in Game 3 against the Anaheim Ducks at the MTS Centre on April 20, 2015 in Winnipeg. (Marianne Helm/Getty Images)
Canadian Content

An Emotional Roller Coaster in Winnipeg

WINNIPEG—Nineteen years is a long time to wait.

Between 1996 and 2015, there were many painful spring days where Winnipeggers watched with envy while other cities had playoff games. Heck, some of them even did the “White Out” that became a staple of Winnipeg Jets playoff games in the late 1980s and early 1990s.

But on Monday night, the wait was over—a day that would never come according to the cynics. Playoff hockey finally returned to Winnipeg. The last game in 1996 felt like a funeral. The first game in 2015 was a celebration.

Tickets were extremely difficult to come by. They were snapped up by eager Jets fans in minutes once they went on sale.

Even the national sports media wanted a part of this. TSN sent their panel, led by James Duthie, Darren Dreger, and Bob McKenzie to Winnipeg even though they no longer had the national TV rights.

The author’s ears are still feeling the effects today.
Sportsnet sent Ron McLean and Don Cherry to the Manitoba capital to take in the atmosphere. “Grapes” has always been very supportive of Winnipeg getting an NHL franchise and he received a warm reception from the MTS Centre faithful.

NHL commissioner Gary Bettman along with deputy commissioner Bill Daly were also in attendance. Before the game, Bettman addressed the media in a news conference.

“I’m here just to witness what I think will be a wonderful, emotional, and exciting evening. I know this is a night almost 19 years in the making and you can feel the energy in the city. It’s palpable,” said Bettman.

“We don’t get tonight without Mark Chipman and David Thomson and the great fans in Winnipeg. I and Bill Daly, and David Zimmerman [NHL senior vice president and chief legal officer] who are here with me…we’re here because we want to be.”

The build-up was at a fever pitch when the doors opened at the MTS Centre. The fans all clad in white began making noise as they entered. A storm was indeed coming.

The Winnipeg fans’ noise reached 124 decibels at one point. The loudest crowd recorded at any sporting event was 142 decibels set by Kansas City Chiefs fans. But that was with 80,000 fans at Arrowhead Stadium as compared to 15,000 at the MTS Centre. (The author’s ears are still feeling the effects today.)

The ubiquitous “Go Jets Go!” chant echoed through the arena and carried over onto the concourse.

When the Jets stepped onto the ice just before the opening face-off, the roar was simply deafening. It was simply thunderous as the “White Out” took over. You could feel the building literally shake.

The anthems provided a special moment as the crowd sang the “Star-Spangled Banner” with gusto. “O Canada” was sung loudly with pride (especially the “true North”) phrase and the noise carried over to the opening face-off. Even a few tears were shed in that moment.

The roof nearly came off the MTS Centre when Jets winger Lee Stempniak opened the scoring midway through the first period.

The second period was wild with the teams combining for five goals. This served to make the fans even more delirious as well as nervous.

But in the end, the noise turned to silence as Richard Rakell’s overtime winner, gave the Ducks a 5–4 victory and a commanding 3–0 lead in the series. For the third straight game, the Jets failed to hold onto a lead after two periods.

But after about a minute of silence a desperate yet defiant “Go Jets Go!” chant was started yet again. The Jets were grounded for the evening. But they’ll be back. And the fans won’t have to wait 19 years, for the next game.

Jeremy Wiebe has written for The Hockey Writers and other web sites. Currently residing in Winnipeg, his Twitter is @jstar1973